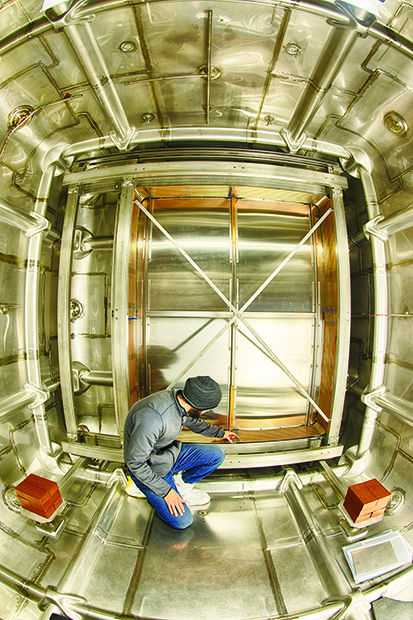 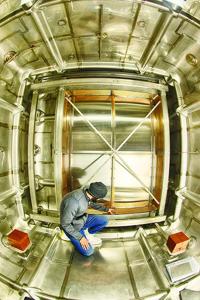 Fermilab engineer Terry Trope examines the interior of a 35-ton cryostat, a prototype of a similar model that will be utilized in the Deep Underground Neutrino Experiment at the Illinois facility.

The Deep Underground Neutrino Experiment (DUNE) will fire a tight beam of neutrinos some 800 miles through the earth, from a powerful particle accelerator at Fermilab in Batavia, Ill. to four massive liquid argon particle detectors at the Sanford Underground Research Facility’s 4,850 level, deep below Lead. The experiment will attempt to answer lingering questions about neutrinos and their role in the makeup of the universe. Graphic courtesy of Fermilab

Fermilab engineer Terry Trope examines the interior of a 35-ton cryostat, a prototype of a similar model that will be utilized in the Deep Underground Neutrino Experiment at the Illinois facility.

The Deep Underground Neutrino Experiment (DUNE) will fire a tight beam of neutrinos some 800 miles through the earth, from a powerful particle accelerator at Fermilab in Batavia, Ill. to four massive liquid argon particle detectors at the Sanford Underground Research Facility’s 4,850 level, deep below Lead. The experiment will attempt to answer lingering questions about neutrinos and their role in the makeup of the universe. Graphic courtesy of Fermilab

LEAD — It sounds like the plot of a science fiction blockbuster: An international team of scientists is hard at work on a cutting edge experiment to beam trillions of curious particles some 800 miles straight through the earth, from a national accelerator lab in rural Illinois to four massive particle detectors in an abandoned gold mine a mile below the streets of small town in South Dakota’s Black Hills.

But it’s all true.

With more than 700 collaborators from roughly 150 institutions in 26 different countries, the Deep Underground Neutrino Experiment (DUNE) is the largest international science experiment ever planned for U.S. soil.

DUNE aims to shed light on the mysteries of neutrinos, the neutral, invisible, weakly interacting sub-atomic particles thought to hold the key to far deeper understanding of the universe.

“It’s such a unique particle, it acts in a different way than any other particle that we’re aware of. That uniqueness is really what makes us want to understand more about it and what it means as far as how the universe was formed and how the universe is acting right now, in fact,” said Josh Willhite, project manager for the Long Baseline Neutrino Facility (LBNF), the moniker bestowed on both the particle accelerator and near particle detector facility at Fermilab in Batavia, Ill. and the far detector facility at the 4,850 level of the Sanford Lab in Lead.

Willhite said scientists theorized the existence of neutrinos in the 1930s, discovered them in ‘50s, and have been studying them ever since.

It’s quite fitting for half of such a monumental neutrino experiment to find a home at the Sanford Lab. A groundbreaking neutrino experiment developed underground at Lead’s then-active Homestake Gold Mine in the 1960s by astrophysicists Ray Davis and John Bahcall led to the discovery that neutrinos oscillate between three different “flavors,” the tau neutrino, muon neutrino, and electron neutrino.

With DUNE, scientists hope to pin down the specific mass of neutrinos. They also hope to find out if neutrinos are their own antiparticle. The answer to that particular question could yield a quantum leap in our understanding of the universe.

Steve Brice, deputy head of Fermilab’s Neutrino Division, said scientists postulate that if neutrinos and antineutrinos behave differently it might explain why there’s more matter than anti-matter in the universe — this crucial balance is responsible for the creation of all that we know exists.

“The wonderful thing about neutrinos is that even though they are so hard to detect and they interact so rarely, there’s so many of them in the universe that they have a really strong effect on how the universe evolves,” Brice said. “Understanding their properties can lead to a much deeper understanding of much larger things, like the evolution of the universe, how galaxies evolve, and structures containing galaxies as well.”

How does it work?

A particle accelerator at Fermilab shoots a tight beam of highly energized protons at a target of carbon or beryllium at a velocity as close to the speed of light as possible. That collision produces many different types of particles, many of which produce neutrinos upon decay. The remaining particles continue their high-speed trajectory down a long pipe filled with a light gas, in which those particles decay. A beam absorber at the end of the pipe filters off all but the neutrinos, which then pass through Fermilab’s near detector. That detector, filled with liquid argon, counts the neutrinos that pass through it and notes their flavors. The neutrinos then continue on their 800-mile journey straight through the earth — no tunnel necessary — to the Sanford Lab, where the facility’s four 10-kiloton liquid argon particle detectors count the neutrinos and note their flavors once more. DUNE collaborators then scour the resultant heaps of data in search of evidence of neutrino oscillation along the journey and clues pointing towards specific masses.

“The DUNE experiment is going to be such a comprehensive study of neutrinos that it really has the possibility to open up something new and different, something that we hadn’t expected. There’s still quite a lot of unexplored territory with neutrinos,” Brice said.

Wilhite said the caverns that will cradle LBNF’s four particle detectors one mile below the earth’s surface will measure in at roughly 60 feet wide, 90 feet tall, and 500 feet long.

“It’s not unprecedented, but it’s approaching that level,” he said. “People haven’t really built caverns this large at that depth.”

Excavation of those caverns is set to begin sometime in 2017, after the Lab’s Ross Shaft rehabilitation project is complete and a waste rock handling system is constructed to support the excavation effort.

In order to maximize DUNE’s potential for discovery, the Sanford facility’s detectors will be installed and turned on one by one while the excavation process continues. Headley said the goal is to have the first 10-kiloton detector switched on in the early 2020s. The estimated life of the experiment is roughly 20 years.

“I grew up in South Dakota, just like a lot of us who are working on this,” Headley added. “For me personally, it’s really cool to be involved in something that’s generating so many positives from so many different perspectives — from an economic-related perspective, opportunities for STEM education, there’s just so many opportunities for the state to really benefit from this coming, not just economic development from the construction activities and in flowing money into the economy, but, just the flow of intellectual capital. You’ve seen this on a smaller scale already with our existing experiments. That’s only going to continue, and it’ll continue for a couple of decades into the future after construction is complete.”

DUNE/LBNF is funded by the U.S. Department of Energy and the international institutions collaborating on the project.

This is the fourth of a six-part series discussing what’s new at the Sanford Underground Labratory.