Laura Lee Shuck, 91, passed on November 30, 2021, at her home in Sturgis surrounded by her family. One of seven siblings, she was born on a small farm in southeast Nebraska to Sherman Steele and Dora Eppens. At the age of 16, she was adopted by Walter and Ruth Hawkinson and moved to Omaha, NE. At that point she lost contact with all of her birth family until open records legislation was passed more than 40 years later. In Omaha she graduated from Benson High School and was a student at the University of Nebraska for two years. While a student, she met Richard Arlon Shuck and they wed there in 1957. Subsequently the couple relocated to the Black Hills and reared three sons.

A loving wife, mother, grandmother, and great-grandmother, Laura’s “career” was her family. She was immensely proud of each one and gifted her family with bountiful love and a wealth of beautiful memories.

Condolences may be sent to the family at www.kinkadefunerals.com. 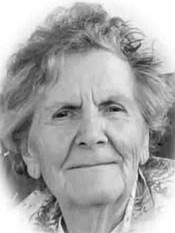