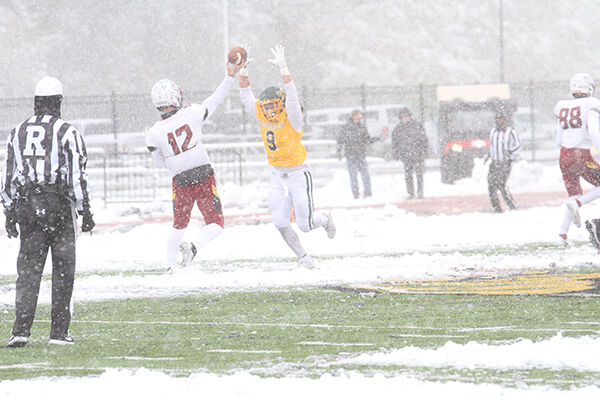 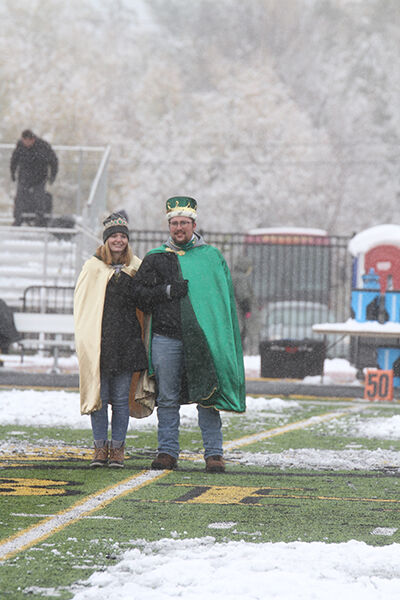 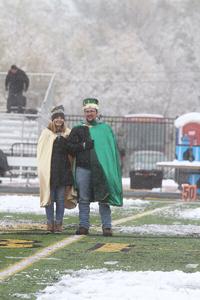 Kaitlyn Kumpf and Ben Finch are introduced at halftime after having been crowned Swarm Days queen and king earlier this month. Pioneer photo by Jason Gross 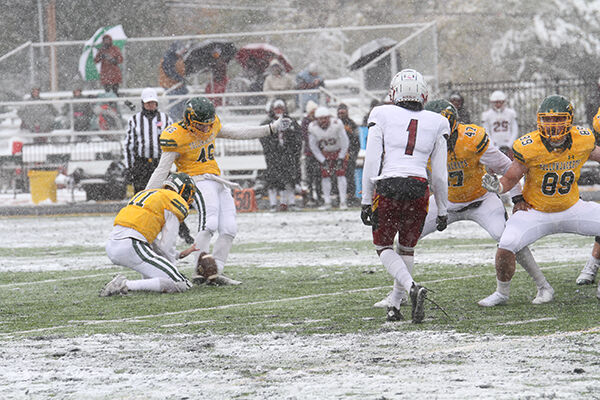 Kaitlyn Kumpf and Ben Finch are introduced at halftime after having been crowned Swarm Days queen and king earlier this month. Pioneer photo by Jason Gross

The visiting Mavericks took over at their 27-yard line. Jesse Rodriquez sprinted 73 yards for a touchdown, with Lucas Ruiz Diaz’s kick tying matters at 7.

Colorado Mesa got the ball back when Damar’ren Mitchell intercepted a tipped pass at the Black Hills State 46. A seven-play drive ended with D’Aris McMillan’s 4-yard touchdown run. The conversion by Ruiz Diaz extended the Mavericks’ lead to 14-7.

The next Yellow Jacket drive started at their 27. Riley Glynn ran 9 and 5 yards for first downs as Black Hills State moved into Mavericks’ territory but was forced to punt.

The Yellow Jackets used Nolan Susel’s 3-yard run on fourth and short to keep the drive going. Teammate Jarett Jenson caught a 13-yard pass for a first down, but Black Hills State had to punt.

Colorado Mesa scored just before the half on Gavin Herberg’s 1-yard touchdown run on fourth and goal. Ruiz Diaz’s conversion made the halftime score 21-7.

The Mavericks added two touchdowns in the third quarter. Mitchell returned an interception 41 yards for a touchdown, and McMillan found the end zone on a 3-yard run. Ruiz Diaz kicked two conversions for a 35-7 Colorado Mesa lead.

“When you’re asked to make a play, you have to step up and make the play,” Breske said. “Right now, we’re struggling to do those things.”

This abbreviated 2020 schedule serves as a huge blessing for the program, in Breske’s view. “Had we not had these five games this fall, would we be making these mistakes next fall in a full season?” he asked.

Black Hills State (0-2) will visit Chadron State this Saturday, Oct. 24. Colorado Mesa will being a 2-0 record into its home game against South Dakota School of Mines & Technology that day.