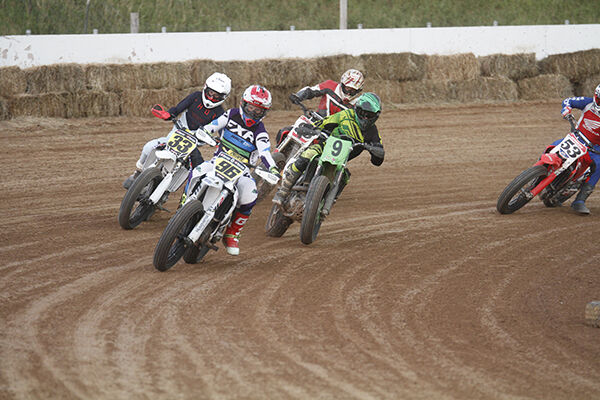 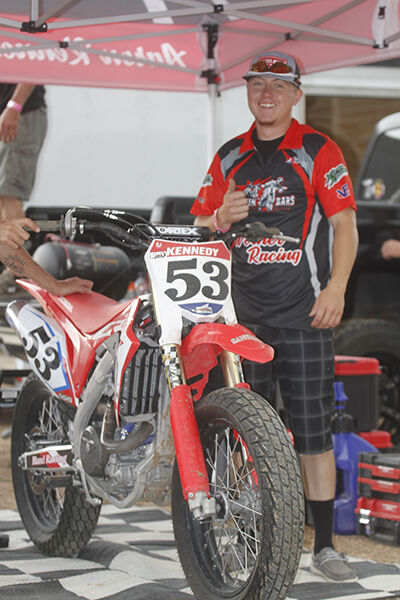 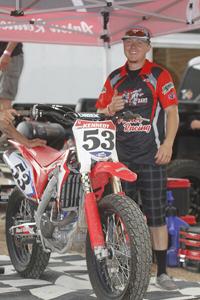 Aaron Kennedy of Denver, Colo., gets ready to prepare his bike for a practice run. Pioneer photo by Jason Gross 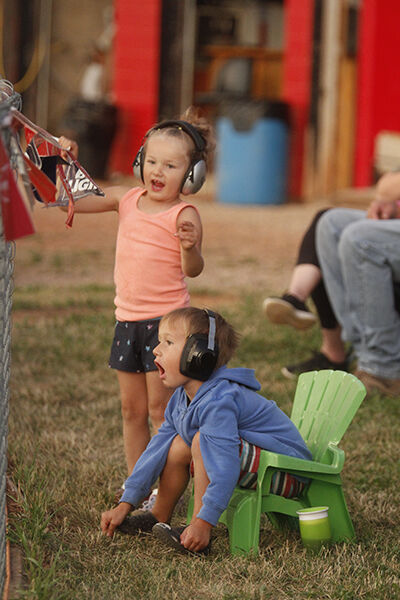 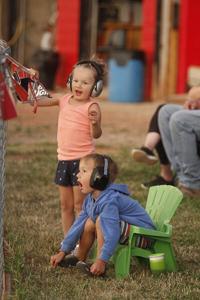 Aaron Kennedy of Denver, Colo., gets ready to prepare his bike for a practice run. Pioneer photo by Jason Gross

The Jackpine Gypsies Motorcycle Club grounds hosted racing on three nights total, with the first two being Friday and Saturday.

Aaron Kennedy Jr. of Denver, Colo., competed in the Pro Singles and Open Pro divisions on Saturday. The 21-year-old has raced professionally for seven years and 15 years overall.

“When I was 5 or 6 years old, I actually hated motorcycles,” Kennedy said. “Then, my dad finally got me on one, and I fell in love with the sport.”

What prompted Kennedy to move the needle in that direction?

“Being on one by myself. It was mostly the speed,” Kennedy recalled. “I love throwing it into a corner.”

He competed in the occasional motocross event but mostly competed on the flat track.

Kennedy recalled the 2012 Amateur Nationals where he wrecked twice in the same race but recovered.

One thing above all else fueled Kennedy’s decision to turn pro.

“I just wanted to keep getting faster and be able to continue improving and getting better over the years,” he said.

The early going did not go well for Kennedy, who was regularly in the hospital for a two-year period.

One of his biggest lessons centered on not trying to over-ride the track. He credited Davey Durrell and Eric Brandt, plus his father Aaron Sr., for their roles in mentoring him.

“My favorite is showing up to a big race in a pickup truck with a bike and actually surprising a lot of people,” Kennedy said of pro racing’s appeal to him. “It’s kind of being the underdog.”

Kennedy said people look at him and wonder what he is doing, since he does not own a big rig like a number of other racers do.

He is unable to accomplish this often because he has recently tried to compete against faster riders.  Kennedy also endeavors to attend bigger races, and something else gets in the way.

“I got in a really bad accident last year,” he said. “I’m still trying to get back in my groove; it’s been a long journey.”

Kennedy biggest challenges centers on the competition. He said many riders are consistently fast, no matter what the track.

“This is actually my first year up here,” Kennedy said in describing Sturgis and its tracks. Local rider Dawson Schieffer invited Kennedy to stay with him.

Kennedy said he encountered a rough racing night on Friday, with bike problems among the difficulties.

As for racing, Kennedy said he loves the half-miles. Reasons include the speed and tight racing.

“It’s been a nice, humbling slap in the face,” Kennedy said in describing the season up to now. He added he thought he was doing really well in 2019, but the competition this season has been really fast.

“We got started way later than we normally do,” Kennedy said of COVID-19’s effect on the racing world. Things normally start in April, but this season did not really get going until June.

Kennedy worked in the oil fields during that time off. He was out of town most of the time and was not able to ride a cycle much at all.

Racers are taking steps to protect themselves, such as using hand sanitizing methods. AFT regulations call for racers to wear masks while in the pits.

The day of a race finds Kennedy trying to stay focused on the task at hand while keeping up with proper nutrition and hydration. He receives help with focus.

“My uncle (A.J. Herrera) passed away a couple of years ago, and I always ask him to ride with me before I go out on the track,” Kennedy said.

Kennedy said he really looked up to Herrera and wanted to be just like him.

The Jackpine Gypsies host a pro hillclimb event at 10 a.m. today. Another Xtreem Flat Track event will get underway at 7 p.m.