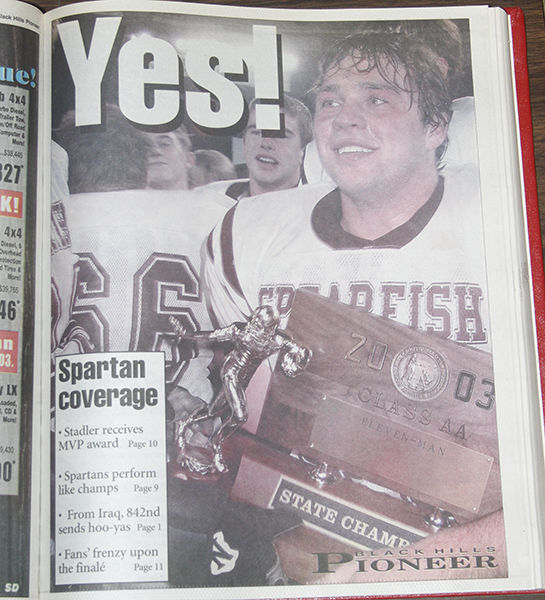 All of these images came from the Monday, May 17, 2003 Black Hills Pioneer after Spearfish captured the state 11AA football championship. Clockwise from top: A Spearfish player clutches the trophy. Players hoist their helmets in celebration. Quarterback Matt Martin chats with a fan. Pioneer file photo 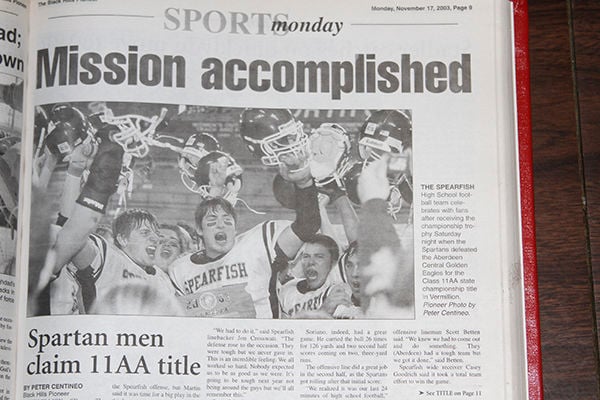 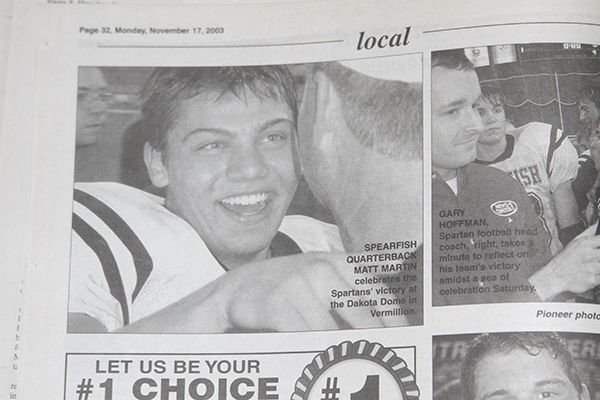 All of these images came from the Monday, May 17, 2003 Black Hills Pioneer after Spearfish captured the state 11AA football championship. Clockwise from top: A Spearfish player clutches the trophy. Players hoist their helmets in celebration. Quarterback Matt Martin chats with a fan. Pioneer file photo

“It really is deserving of interviewing every person because so many people had a piece in it,” Matt Martin said. “That group was just so team-oriented, and you’ve got to give thanks to them and then also the parents.”

Martin started at quarterback and in the secondary on a Spartans’ team that defeated Aberdeen Central 21-7 to win the state title and cap a 12-1 season.

Groups like that do not come around very often, according to Martin. He was a senior at the time.

“It wasn’t just the players; it was the families,” Martin said. “No one cared who scored the touchdown or who made the play on defense. It was all about the final number.”

Spearfish finished 4-7 in 2002, which was Martin’s first as starting quarterback. He said many had played varsity starting in 2001, taking their lumps while gaining experience plus one key intangible.

“We had a drive and weren’t going to settle for mediocrity,” Martin said. “We knew what we wanted to accomplish.”

A 2002 playoff loss to Sioux Falls Washington gave Spearfish confidence going into the offseason. That helped spur players to go the extra mile.

“We were committed to the weight room, to conditioning all spring, all summer, leading into the fall,” Martin said. Twenty to 30 players were in that room each day, with everyone holding each other accountable.

Spearfish defeated Sioux Falls O’Gorman 27-21 and Rapid City Central 28-14 to open the season. A 20-18 loss to Rapid City Stevens dropped the Spartans to 2-1.

Following a 30-12 victory over Sioux Falls Roosevelt, Spearfish traveled to Yankton and downed the defending state champion 24-7. Martin remembered it as a defining game.

“That really gave us the confidence to go, ‘Hey, we’ve got something special here,’” Martin said. “Everything just kind of percolated from there.”