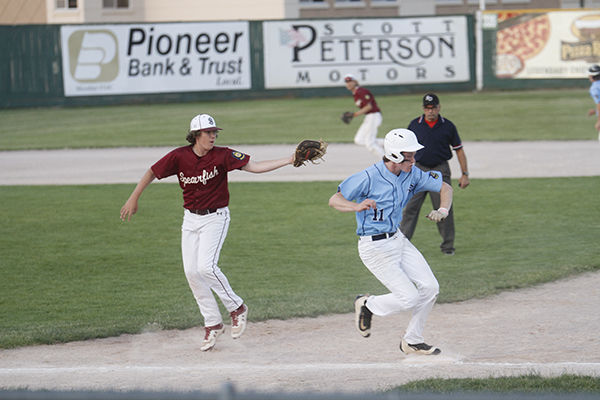 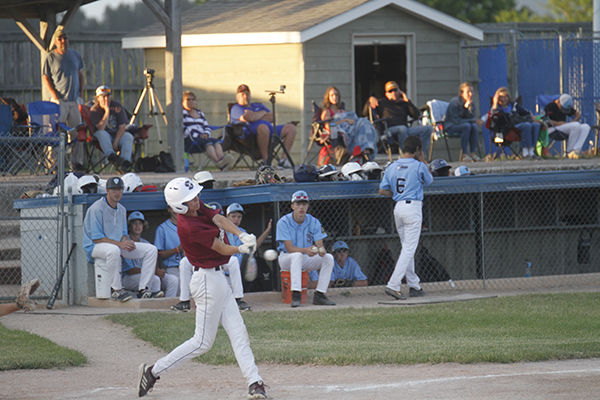 Connor Comer of Spearfish connects on a pitch. Pioneer photo by Jason Gross

Connor Comer of Spearfish connects on a pitch. Pioneer photo by Jason Gross

“The bats went cold after the second inning,” said Sturgis head coach Dominic Bradford, whose team grabbed a 7-0 lead after the first frame. “We were fortunate in the sixth inning; they kind of woke back up for us.”

Anderson scored on a Colton Cruickshank single to push Sturgis’ edge to 3-0. A fielder’s choice enabled John Fischer to cross home plate and make the score 4-0.

Dustin Alan walked as the Titans loaded the bases with two outs in the first. Hess belted a triple to score Gage Murphey, RJ Andrzejeski, and Alan; Sturgis led 7-0.

Sturgis hosted Senior Night before the contest. Bradford credited that excitement for the Titans’ strong start.

Spearfish used three walks to load the bases with one out in the second inning. Austin McMillin’s walk scored Alec Sundsted as Post 164 cut the margin to 7-1.

Noah Mollman followed with a walk that scored Sundsted, making the score 7-2. Lucas Mehmen laced a double to plate Carter Lyon and McMillin as Spearfish trailed only 7-4.

Sturgis extended its lead to 8-4 in the second when Anderson dashed home on a Dylan Gillespie groundout. Fischer scored on a wild pitch as the Titans went ahead 9-4.

The Titans loaded the bases with two outs in the fourth. Hess walked to bring in Murphey and make the score 10-4.

Two walks and a failed fielder’s choice loaded the bases in Spearfish’s half of the sixth frame. Ty Sieber reached on a fielder’s choice; Lyon and McMillin sprinted home to keep Post 164 within 10-6.

Sturgis loaded the bases with one out in the sixth. Inhofer’s walk scored Andrzejeski and made the score 11-6. Anderson singled to plate Alan and extend the margin to 12-6.

Fischer’s single enabled Hess and Inhofer to score, making the margin 14-6. Cruickshank reached on an error to plate Anderson for a 15-6 lead.

The next batter, Murphey, reached on an error. Fischer sprinted home for Sturgis’ 16-6 victory.

“The story has kind of been all year; we’re just giving away too many runs,” Spearfish head coach Isaac Taylor said. “Today we were able to battle back, and that’s the best I’ve seen us do.”

Spearfish pitcher Brock Pentheny recovered from a rough first inning. Taylor said Pentheny was told to let the defense work for him, and his confidence increased.

Post 164’s record is 1-10, but Taylor said the team played very well last weekend in Sturgis. “We’re right on that cusp, that tipping edge to explode where we’re just going everything right,” he added.

“I’m pretty happy with that because we did have a lot of walks,” Bradford said of Sturgis’ allowing only six runs. “We were able to work our way out of it.”

Sturgis (17-4) will host Harrisburg on Thursday at Strong Field. Game times are set for 5 and 7 p.m.