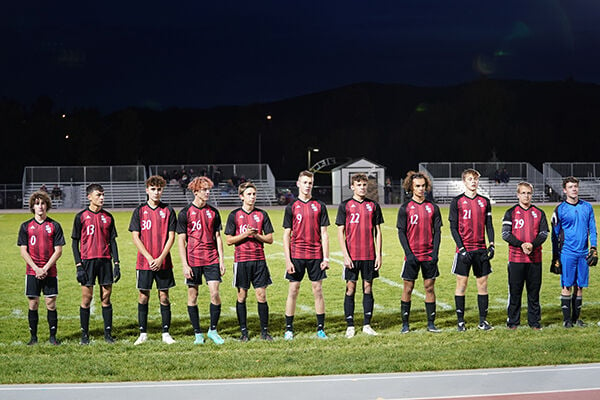 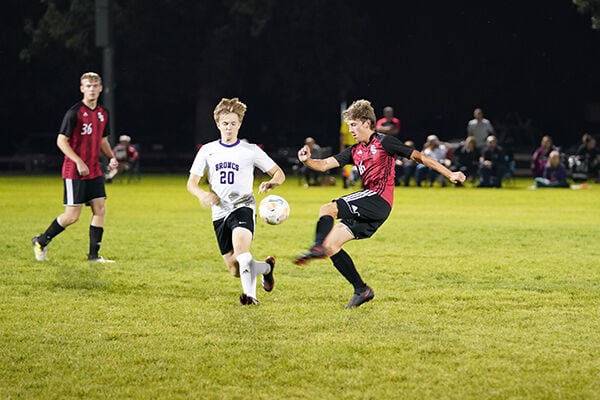 Jared Sailer, moves the ball past a Belle Fourche player earlier this season attempting to get in scoring position. Pioneer photo by Tim Potts 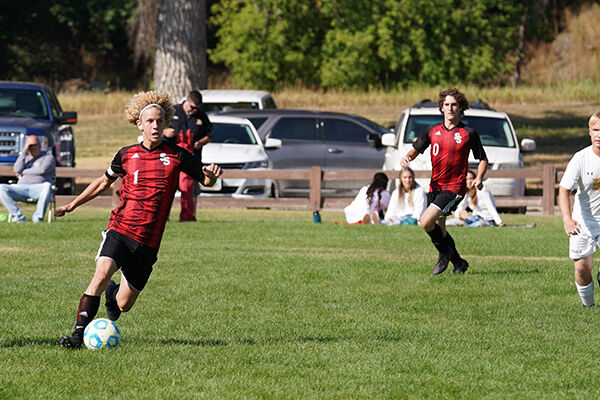 Kale Dennis passes the ball for another assist during a game earlier this season.  Dennis now holds the school record for number of assists in a season. Pioneer photo by Tim Potts

Jared Sailer, moves the ball past a Belle Fourche player earlier this season attempting to get in scoring position. Pioneer photo by Tim Potts

Kale Dennis passes the ball for another assist during a game earlier this season.  Dennis now holds the school record for number of assists in a season. Pioneer photo by Tim Potts

They lost to No. 4 Aberdeen Central 5-0,in the first round of Class AA high school soccer playoff action, ending their season.

“This season, we came in with heavy expectations. Health got in the way of some of those goals and hurt us on the field but the team had more fun this year than any year to date,” said Tyler Louder, Sturgis Brown’s head soccer coach. “Some struggles along the way but the overall feeling in the season was a success.”

“These seniors will be missed, a lot of talent, leadership, and some of the funniest kids I’ve coached in my life. Every day the team had smiles on their faces because of these boys,” Louder said.

The leading scoring for the Scoopers was Jared Sailer.

Sailer lead the team in scoring for the third year in a row, scoring 12 goals this season.

Kale Dennis lead the team in assists with a school record 13 assists.

The Scoopers scored a record of 57 goals during the 2019 season.

“This is a huge increase from 36 last year,” Louder added.

“With the season ending I don’t think it is how any of us wanted it to end, but it happens. We had a few ups and downs, losing to Douglas was a big loss for us, but we came back the next game and played the number two team in the state and tied them on our home field on senior night,” said Jared Sailer, a Sturgis Brown senior.  “I’m definitely going to miss playing with my teammates and my coaches they had a big impact on me through my high school career. Knowing now that I have the record for the most goals scored in the school is a big accomplishment, I have to give credit to Kale Dennis for assisting me on probably 25 of those goals.”

“If I had a one on one shot against the goal keeper and I kicked it right to him instead of him getting mad at me he would pull me aside and talk to me saying ‘just be calm and shoot to the corners’, the next opportunity I had I would take his advice and shoot to the corners, so big thanks to him for helping me out. All in all I had a really fun five years of playing on varsity with all teammates,” Sailor said.

“I have coached this group since I came to Sturgis, and all members from my first team here will now be gone. This will be a sad moment, as I won’t be able to coach them in high school again, but it’s a happy feeling because I know how much they have grown as men,” Louder said.

The Scoopers went 4-2-2 at home this season and always enjoyed playing in front of the many fans.

Louder talked about some season highlights.

“For me it’s watching the boys fight back against St. Thomas More and putting on a show against Spearfish on senior night. The energy that night was one of the greatest I’ve been around,” Louder said.

The future is bright for the boys Scooper soccer with 26 underclassman.

“I am looking forward to how the team can do now that they cannot rely on the seniors. We had several underclassmen stand out this season that reminded me of our current senior class when they were younger,” said Louder.

The year end awards ceremony is scheduled for Nov. 17.