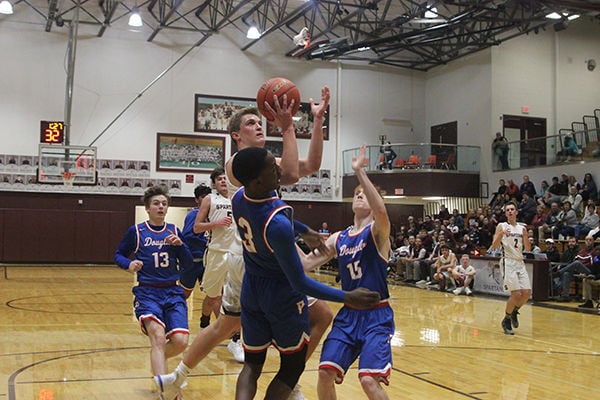 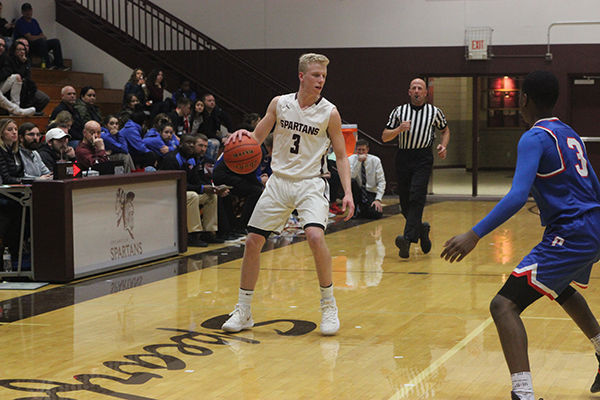 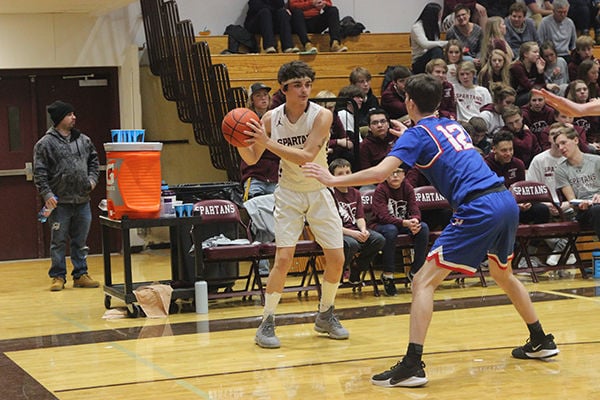 Spartan guard Aiden Woods looks for a teammate to pass to. Pioneer photo by Dennis Knuckles

Spartan guard Aiden Woods looks for a teammate to pass to. Pioneer photo by Dennis Knuckles

“That was another great victory for the Spartans. We didn’t play our best, and found a way to win,” said Erik Skoglund, the Spartans head coach. “Over the years that has happened too many times, and these guys have put the time in, They’ve lost a lot of games, they’ve won a lot of games, and we are happy and proud of them, their fans, their family, and their school to come away with this victory.”

John Nickles hit two free throws and a field goal to put the Spartans on top, 4-2.

Ammerman hit a free throw and Nickles hit back-to-back field goals to tie the score at 9-9 after the first eight minutes of play.

A 3-pointer by Nickles and two free throws by Jake Powell kept the Spartans on top, 14-9.

Peldo hit a 3-pointer, but the Patriots held on to a 26-25 lead at the imtermission.

Field goals by Kyle Sheild and Kearby Jindra helped extend the Patriots lead to 32-25.A field goal by Nickles, two free throws by Lyons, and a field goal by Peyton Millis pulled the Spartans within three points, 34-31.

A layup by Logan Ammerman amd a 3-pointer and a free throw by Aiden Woods kept Spearfish close, 39-38, going into the final eight minutes of play.

Douglas held the lead, 46-43 with just under four minutes left in the game.

Field goals by Nickles and Powell, a Powell free throw, and two free throws by Nickels gave Spearfish the lead 54-51 with 1:28 left in the game.

Darrell Knight scored for the Patriots to pull Douglas within two points, 55-53, with 14.1 seconds left in the game.

Powell hit one of two free throws to push the Spearfish lead to 56-53.

Knight made a layup for the Patriots, but Douglas didn’t have anymore timeouts and the clock expired and the Spartans hung on for the win 56-55.

Nickles lead the Spartans in scoring with 24 points.

Powell, a senior guard for the Spartans, said he was happy his team got the win.

“We played a little rough in the first half and the second half we came out pretty strong, working more as a team, and playing with more intensity,” Powell said.