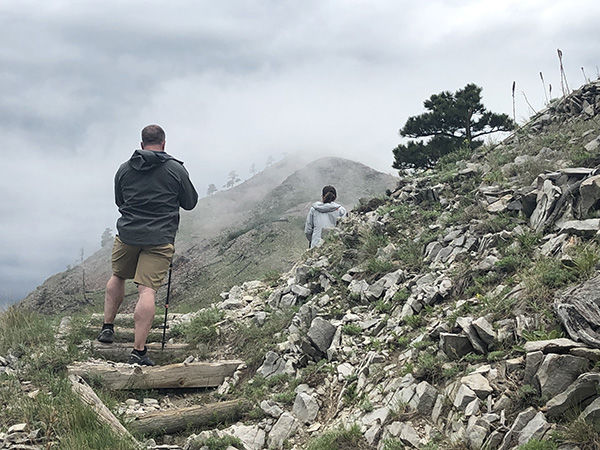 Bear Butte rises in the background as Jesse and Ashley Kurtenbach hike the trail. Courtesy photo 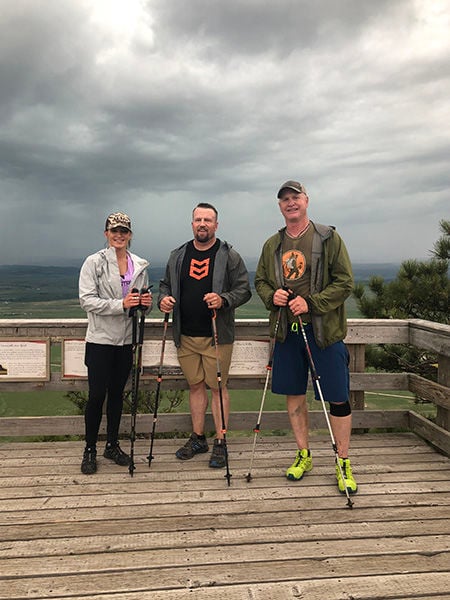 Bear Butte rises in the background as Jesse and Ashley Kurtenbach hike the trail. Courtesy photo

SPEARFISH — A hiking day starting at 4 a.m. and ending at 8 p.m. Saturday, resulted in three Spearfish residents hiking up five area peaks and covering a total distance of 28.69 miles.

An early-morning storm was almost done when the group started up Crow Peak. Weather cooperated until the group reached the Sturgis site.

“We went to Bear Butte, and we knew we had a little over an hour to get that done,” Hanson recalled. “You could see the storms were rolling in.”

The group finished Bear Butte in 65 minutes: just in time. “It was starting with lightning and rain, and it hailed a little bit,” Hanson said.

“We got lucky and picked a perfect day,” Rick Hanson said. “Sunday was not very nice, and Monday wasn’t very nice.”

Hanson had been on all five sites before Saturday. He said he tried Saturday’s endeavor for the adventure and challenge.

Hiking Crow Peak that day helped Hanson toward a goal he has for this year.

“At the first of this year, I decided I was going to climb Crow Peak 100 times,” he said. The Kurtenbachs were told of Hanson’s aim, and they later joined the effort.

“It’s just one of those things to think about if you can do it or not,” Hanson said. “A guy asked me how many times I’ve climbed Crow Peak, and I said I didn’t know.”

That led to Hanson’s decision to climb Crow Peak 100 times. He was at 58 after Saturday.