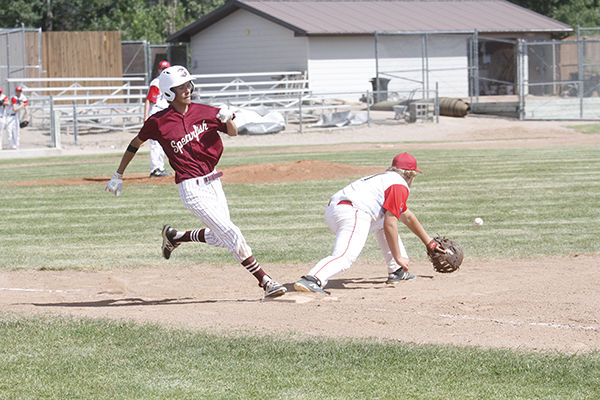 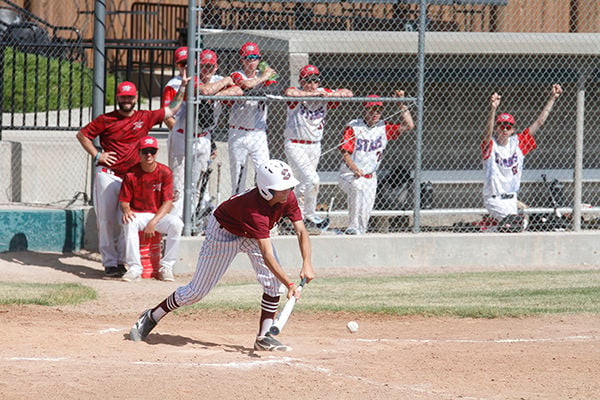 Donnor Craig of Spearfish puts down a bunt. Pioneer photo by Jason Gross

Donnor Craig of Spearfish puts down a bunt. Pioneer photo by Jason Gross

SPEARFISH — Spearfish Post 164 defeated the Rapid City Post 320 Risers 12-10 and 14-4 in a Legion baseball doubleheader played Wednesday at Black Hills Energy Stadium. Play in the second game ended after six innings because of the 10-run rule.

Post 164 head coach Isaac Taylor said the team met all of its goals for the day.

“We got everybody playing time; we got everyone some ABs (at-bats),” Taylor said. “We pitched the ball, got ahead of guys.”

Rapid City built a 3-0 lead in the second inning of the second game. David Bay’s two-run double led the way.

Lucas Mehmen’s second-inning single scored Connor Comer and Carter Lyon as Spearfish cut the margin to 3-2. Noah Mollman scored on a wild pitch to bring Post 164 into a 3-3 tie.

A run-scoring single by Arell Lopez pushed Post 320 ahead 4-3 in the top of the third.

Comer sprinted home on a wild pitch in the third as Spearfish tied matters at four. Lyon and Donner Craig scored to give Post 164 a 6-4 lead.

Craig sprinted home on a wild pitch in the fourth inning to extend Spearfish’s lead to 10-4. Alec Sundsted reached on an error; Mollman and Haught came home to make the score 12-4.

Post 164 loaded the bases with one out in the fifth. Haught laced a double to score Craig and Mollman, ending the game.

Craig scored three runs and added one hit for Spearfish. Hartwig earned the pitching victory while having to throw only 70 pitches.

“We didn’t even have to use another pitcher because he (Hartwig) was so efficient,” Taylor said. “I was very pleased with how he got ahead in the count, kept them (Post 320) off balance, and let our defense get some outs for him.”

Spearfish’s junior varsity will square off against Belle Fourche at 3 p.m. The Post 164 varsity faces Newcastle at 5 p.m.