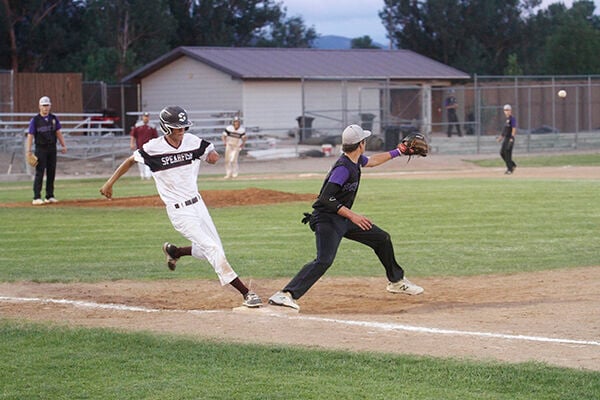 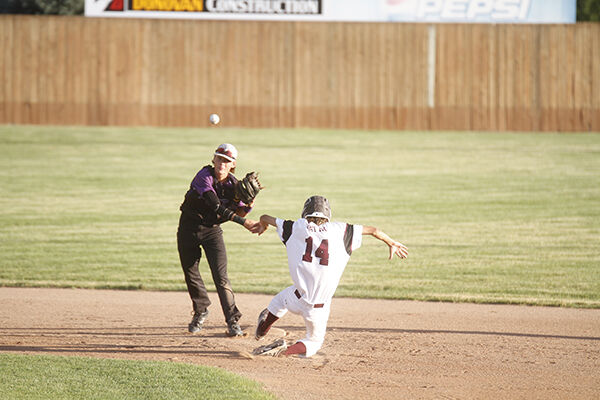 “What we have been saying every week is mak3 the routine play. When we make the routine play, we can make the great play,” said Spearfish Post 164 head coach Isaac Taylor, whose team earned its fourth straight win.

Spearfish seniors Lucas Mehmen and Brock Pentheny were honored in a pregame ceremony. They received a bat that their teammates autographed as they stood with their parents near home plate.

Pentheny reached base on an error in Spearfish’s half of the first frame. Aiden Haught scored to put Post 164 ahead 1-0. The margin reached 2-0 as Pentheny scored on Alec Sundsted’s single.

Spearfish extended its lead to 3-0 as Haught scored on Pentheny’s third-inning triple. Sundsted lofted a sacrifice fly to plate Pentheny and make the score 4-0.

Belle Fourche Post 32 got on the scoreboard in the fourth inning. Blake Vissia hit a one-out single and sprinted home on Sean Wahlfeldt’s double to trim the margin to 4-1.

Carter Lyon scored on an errant throw in the fourth as Spearfish went ahead 5-1. Ty Sieber’s single scored Mehman and boosted the advantage to 6-1.

Spearfish loaded the bases with one out in the fourth. Sundsted walked to bring home Sieber for a 7-1 lead. Jonathon Bloom reached base on a failed fielder’s choice; Haught scored to increase the margin to 8-1.

Post 164 added a run in the fifth inning. Sieber grounded out to score Noah Mollman and make the score 9-1.

Belle Fourche used Wahlfeldt’s RBI double to plate Gage Kracht in the sixth and keep within 9-2.

Spearfish loaded the bases with one out in the sixth. Mollman singled to score Sundsted and Connor Comer for an 11-2 score. Lyon sprinted home on a wild pitch for the final 12-2 count.

Haught scored three runs and added two hits for Spearfish. Brady Hartwig pitched the entire game and got the win.

Blake Vissia took the pitching loss for Belle Fourche. Kracht had one run and two hits.

“We also had another outstanding pitching performance from our starter,” Taylor said. “He was filling up the (strike) zone, and when you do that, good things are going to happen.”

Taylor added Hartwig was able to mix in his changeup and curveball to keep Belle Fourche’s hitters off balance.

“We definitely have an entire buy-in from our team for what we’re trying to do,” Taylor said. He added this is for the future as well as this season.

Belle Fourche head coach Randy Doran said the batters were not making the needed adjustments at the plate. He added the defense did not come ready to go from the outset.

“We’re still searching for that guy who can rally the troops,” Doran said.

The teams will return to the field on Wednesday, according to Doran. “We go all out for this last game of the series and show what Post 32 can actually do,” he said.