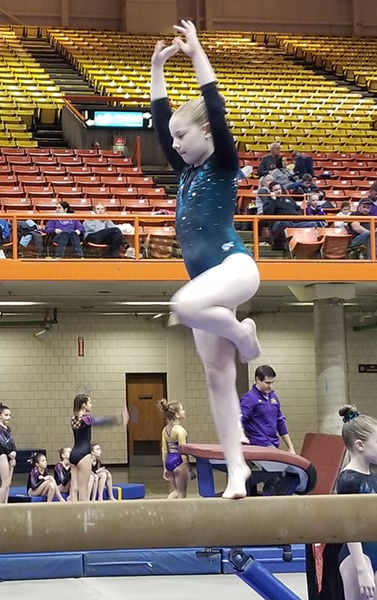 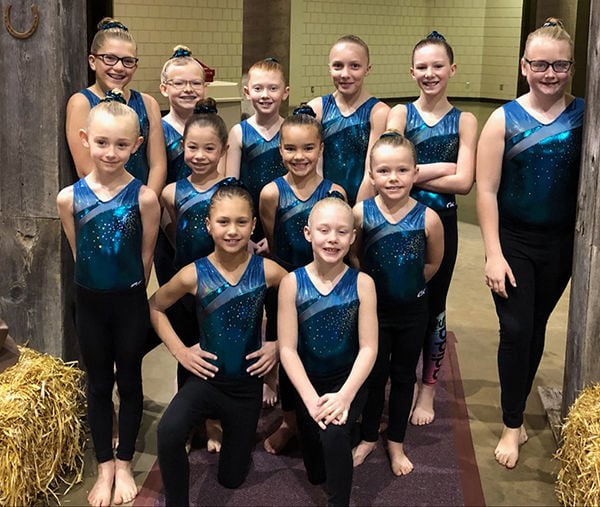 The meet featured gymnasts of all ages from South Dakota, Wyoming, and Montana.  The Spearfish Optional gymnasts were all featured in Saturday’s competition.

In the 8 to 10 age group, the Spearfish squad was led by gold medal all around winner Mia Bush.

Her all around total of 36.500 was the top score of the day for Level 6 athletes.

In the 11 and over age group, Kyra Vandenberg was the all around winner, taking the gold with a personal best performance and a total score of 35.35.

The Level 6 team put together a team total score of 108.20 to win the team championship.

At Level 7, Marla Sproul captured the silver medal on floor with a score of 9.05, and Kathleen Cook, competing as the lone Level 8 for Spearfish, won the all around gold with a total of 36.05.

The final competitors for Spearfish were the Level 10 gymnasts Ruthie Wehrung, Savanna Dunwoody, and Jena Swanson.

SGA head coach Phil Summers said the highlight of the meet was the bar rotation.

“To watch all 3 gymnasts hit their bar sets in the same meet was really exciting for the coaches and the athletes. They have worked really hard on this event and it was great to see them all put it together in front of the home crowd,” said Summers.

The Optional gymnasts will have their next competition at the Texas Prime Invitational which will feature some of the best gymnasts in the country.

“They will have their work cut out for them in this meet,” said Summers. “It is one of the premier meets of the season for Level 10 gymnasts.”

It is hosted by world champion gymnast Kim Zmeskal in Irving, Texas, and features a finals session that you can qualify to called the Legendz Classic.

This meet features the top competitors from all the Friday sessions of Level 9 and 10s, and they are split into four teams that are captained/coached by Legends in the sport.

“We added some of our pre-team and advanced recreational gymnasts to this meet,” said Summers. “It was a chance for them to see what a competition is like and to earn some reward for the effort they put in on a weekly basis and decide if they would like to pursue further involvement in the competitive program.  It appeared that they all enjoyed the experience and came away with some medals for their efforts.”

Also competing for the first time were Madelyn Adams and Bryn Coyle.

DeAndra Reinbold placed fifth on vault (9.05), and took on the bronze on bars with a score of 8.8.

In the 10 to 11-year-old division, it was a clean sweep for Taylor English.

The SGA finished second over all in the team competition with a score of 108.05.

Alyse Sorcic added a fourth place finish on beam (8.6), and finished with an all around total of 33.25.

“This group has really been on fire this season, said Amber Lewis, Excel head coach.  “They continued their success at the Wild West Invite.”

Wolterstorff topped the field in the all around with her gold medal winning performance at 36.175.

The Excel Gold team claimed another team victory in the team competition with a score of 106.725.

The Level 3 gymnasts from SGA took to the floor with high hopes of continuing their winning streak in the team competition and came through with flying colors, once again claiming the team title with a score of 107.60

In the 10-year-old division, the top finisher for Spearfish was Avalon Gray.

Finishing out the weekend for Spearfish were Level 4 gymnasts, Taycee Ziegler and Morgan Jenkins.

“This was a good meet for all of our compulsory gymnast,” said head coach Lexie Cathcart, the SGA Level 4 head coach. “It is always fun when you get to compete and the local level and have your family and friends in the stands.