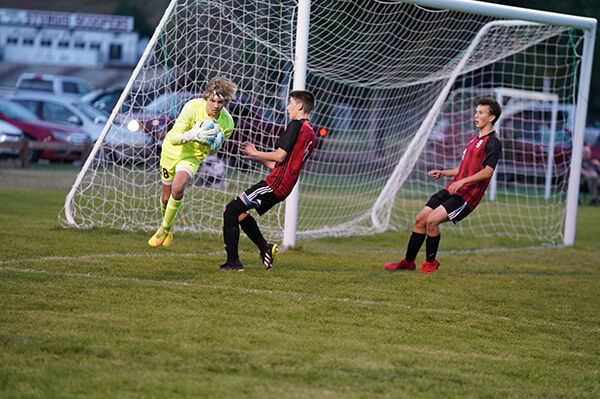 Jacob Donner, Spearfish, snags the ball while being pressured by the Scoopers, Talan Kullbom and Cruz Chavez. Pioneer photo by Tim Potts 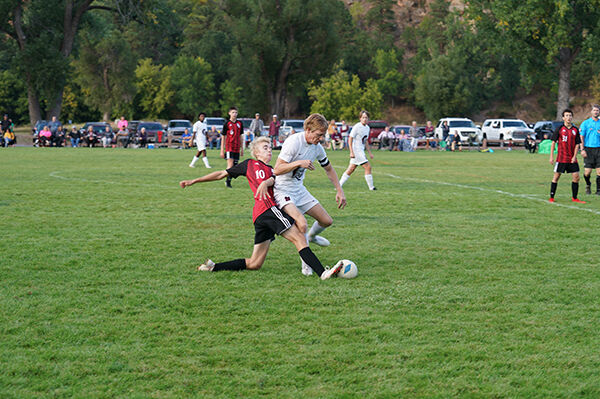 Jacob Donner, Spearfish, snags the ball while being pressured by the Scoopers, Talan Kullbom and Cruz Chavez. Pioneer photo by Tim Potts

The Spartans scored the only goal in the first half when Tyler Borchgrevink connected on a long shot against Christian Lemcke, Sturgis Brown goalie, with just over 20 minutes off the clock.

Scoring goals in the second half of the game for the Spartans was Nicholas Wise, Lucas Rodgers, Yohannes Peterson, Coy Hamilton, and Jensen Damberg.

“We had six different plays score tonight and that is what we have been working on all year. We are not going to depend on any one player, or two people to get our goals,” said Jim Hill, Spearfish’s head soccer coach.

“Any time you get above 25 shots at the goal, that is quite dominate play,” said Hill.

Ty Louder, Sturgis Brown’s head soccer coach had some positive things to take from the match.

“From our side, even with some of our flaws in our game, we let them have thru balls, they are a team that plays the ball long and they are fast,” said Louder.  “A highlight would be that Dash Schuster played fantastic and he was all over the field and didn’t stop for one second and was one of the best players on the field tonight.”

The Scooper defense struggled in the second half, allowing five goals.

“I don’t know if we weren’t hydrated enough or something, I just think they caught us at the right moments and all of their shooters had great finishes tonight, great ball placement by Spearfish,” Louder said.

Hill talked about what he told his team at halftime.

“The speed of play, your thinking, not running, you are running plenty fast but speed of play, can you think quicker, make quicker decisions, and if you do, they just won’t keep up with us,” said Hill.  “So what do we do, we go out and make four passes and hit a goal.”

The Spartans are now 5-2-1 on the season and will travel to Douglas/Rapid City Christian on Thursday.