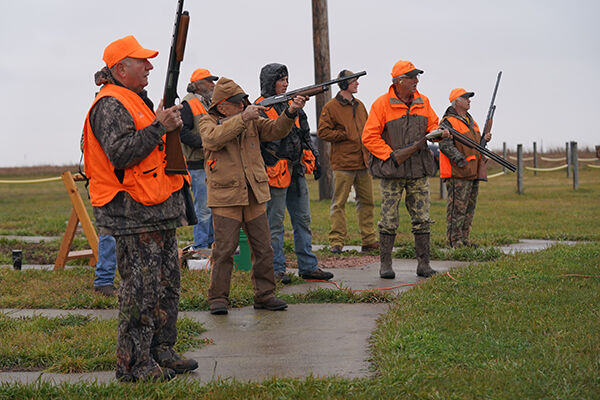 Veterans prepare for the week of hunting by familiarizing themselves with shotguns by shooting clay pigeons at the Whitlock Bay Sportsman Club. Pioneer photo by Tim Potts 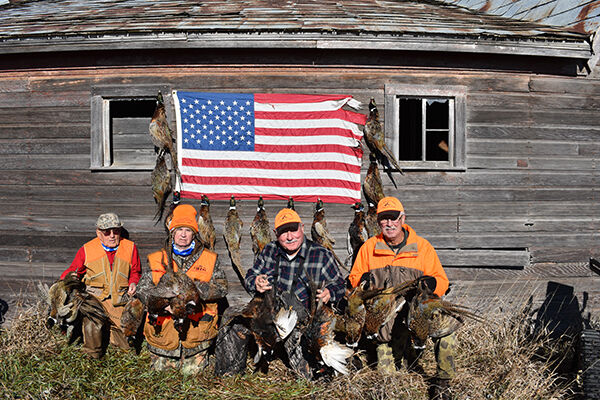 Veterans prepare for the week of hunting by familiarizing themselves with shotguns by shooting clay pigeons at the Whitlock Bay Sportsman Club. Pioneer photo by Tim Potts

GETTYSBURG — The 2021 Decorated Veterans pheasant hunt kicked off Nov. 10 with breakfast and introductions of the four selected Veterans at the 212 Mini mall café in Gettysburg.  This is the sixth annual hunt organized and funded in full by the Gettysburg Veterans of Foreign War (VFW) Post 8530.

In preparation for the hunt, the four veterans were hosted by the Whitlock Bay Sportsman Club to practice shooting clay pigeons, despite the light rain and cool temperature.

Once the veterans felt comfortable with shooting, the group proceeded to Brown’s Hunting Ranch for the first day of pheasant hunting. The hunters enjoyed shooting their limit of roosters.

Isaac Full, the senior vice commander for the Post and this year’s hunt chairman talked about the event.  “Having the ability to plan and host this hunt has been the highlight of my year. Our post is not concerned with the number of birds that are actually killed during this event, the priority is hosting a memorable experience that our guests can enjoy for years to come,” said Full. “We want to thank the community for their support, without you all this would not be possible. As we are here this week, and you see us around please feel free to walk up and shake hands and introduce yourself to our guest Decorated Veterans.”

Harold L. McMahon, a World War II veteran from Kewanee, Ill., shared his story and said, “It is not about getting pheasants, it is about the guys and camaraderie.”

McMahon attempted to enlist into the Marines at 17, but they would not take him, then he was drafted by the Navy in 1943. He attended boot camp at Farragut Idaho Naval training station, went to aviation ordnance school at Norman, Okla., then gunner school in Purcell, Okla., and flight training at Fort Lauderdale, Fla. The veteran also had additional training in aviation on the West Coast. He was a combat air crewman and flew as a gunner in a torpedo plane, The Avenger, in Air Group 12 aboard the aircraft carrier, No. 15 Randolph.

McMahon received his Purple Heart when he was injured by flying shrapnel when the aircraft carrier was hit by a bomber on a suicide plane on March 11, 1945. He spent until Sept. 25, 1945 in the hospital until he was discharged.

McMahon served in the Pacific and was the first of the Navy to go to Japan after Doolittle.  They bombed Iwo Jima, and Chi Chi Jima (which was where George Bush was shot down).

They lost two planes and crews, who were captured and murdered.  McMahon is retired, he has worked at Federal Land Bank for years and then farmed and raised Angus breeding cattle and sold bulls in Phillip.

Raymond Hudzinski, a Vietnam Vet from Princeton, Wis., at 23 years old, he was drafted into the Army’s Infantry 101st Airborne Division.

Hudzinski walked point as a rifleman for a while, then served as a radio telephone operator in the field for over eight months.

He was reassigned to battalion headquarters at Camp Evans. He received his Purple Heart when wounded from a mortar round at Firebase Ripcord on April 1, 1970.

He has a sucking chest wound and still has two pieces of shrapnel in his left lung.

He also has been diagnosed with post traumatic stress disorder (PTSD), neuropathy, and still suffers from bad dreams that just won’t go away.

Hudzinski came back to the United States and was reassigned to the First Infantry Division at Fort Riley, Kan.

He was also an operation sergeant sent to Germany for Reforger II exercise for three weeks to play war games.

“I would like to thank all veterans no matter where or how they severed. We are all brothers serving our country,” said Hudzinski.  “What a fantastic day, unbelievable, I was in the right place at the right time, I can’t believe what they (Gettysburg VFW) have done for us, true patriots. Our organization back home bends over backwards but this is so much more, I love the small-town support,” said Hudzinski.

He joined the 101st Airborne Army infantry and was in Vietnam for 11 months.

Lytle received a Purple Heart from an accident where he was riding on an armored personal carrier that hit a land mine on his way back from getting supplies just before he was getting ready to come home.

Lytle is retired and has worked on a farm and also for the Nebraska Department of Transportation.

He said he has been to South Dakota and enjoyed his time here working to clear roads after a major blizzard that had the state shut down.

Lytle commented about his first day of hunting.

“There are so many birds here, I saw more birds yesterday than I saw in years,” he said.

John (Mick) Zingo, from Martins Ferry, Ohio, attended boot camp at Fort Jackson, S.C. after being drafted into the Army at age 20.

In 1968, he served in Vietnam, twelve miles south of DMZ in the 1st Cavalry division of the Army and served as infantry squad leader.

Zingo received his Purple Heart when he was in an ambush and friendly fire wounded him and he ended up in Brook General Hospital, Fort Sam Houston, Texas, for over five months.

Zingo is now serving as president of the Belmont County (Ohio) Veterans Service Commission, and is in his 19th year at that position. His job is to help veterans, their widows and families. The state of Ohio collects funds from taxes to help vets and is one of the few states in the country that has commissions for Veterans’ assistance.

His career, that he retired from, was a mechanic in an underground coal mine in Ohio and West Virginia. This was Zingo’s first trip to South Dakota and he commented on his stay.

“The people are fantastic, top notch and I can’t say enough about the accommodations, food and family atmosphere and incredible hospitality.  Hunting was outstanding, shot a few holes in sky and ended the day with two birds and a lot of fun.”

Lynn Rolf III, VFW national programs director has been active with the Gettysburg VFW and has helped each year of the hunt.

“As a son of a Vietnam veteran to be able to give back to other veterans and share my puppy has done so much for me personally and aided in my own healing as an Iraq veteran,” said Rolf. “The town of Gettysburg and the local VFW post have rolled out the red carpet to show these Veterans we appreciate their service and will never forget those that came before us. This truly embodies what is right with the United States of America and what we fought for."