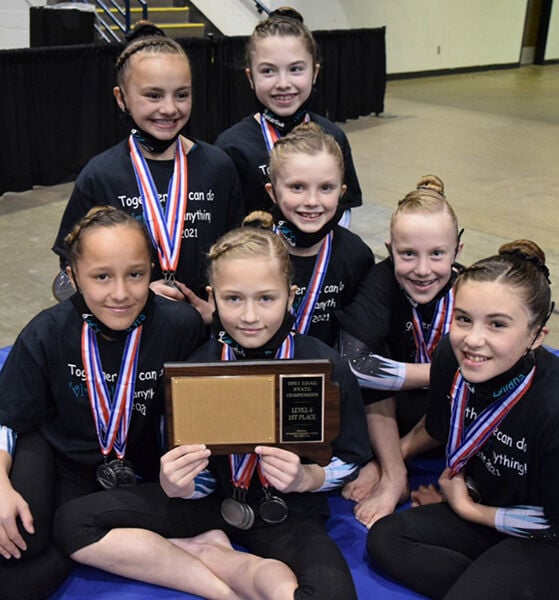 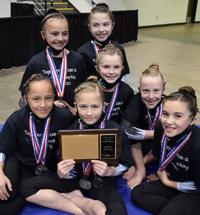 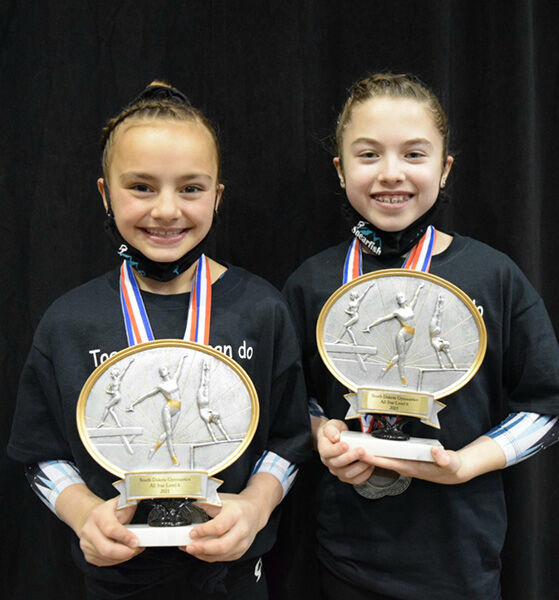 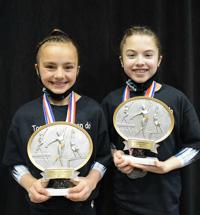 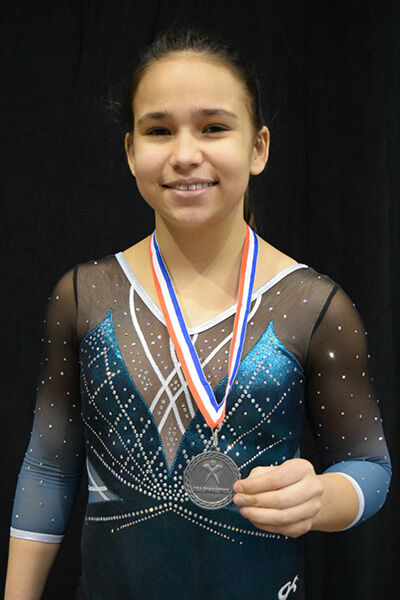 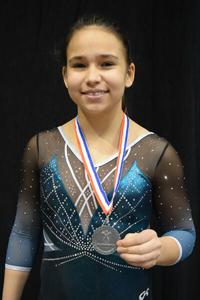 SIOUX FALLS — In the second day of competition of the USAG state meet the optional gymnasts from Spearfish took to the floor and put on a very impressive show winning two team championships at both Level 6 and Level 10.

The Level 6 team started out the Saturday competition winning the team title with their highest score of the season at 114.05.

The top three scores on each event regardless of age group contribute to the overall team total.

The Spearfish squad averaged a 9.5 for each routine on all four events to win the title.

Jenkins moved up to Levels from last season and really had a her finest performances of the year at the state meet.

The highlight of the meet for Moser, however was her amazing bar routine.

She put up the highest Bar score of the day winning the right to be named the State Bar Champion with a score of 9.7.

Mia Bush was the most consistent performer for Spearfish and claimed the silver medal on bars with a 9.55, and went on to win three individual state championship titles. She won vault (9.125), beam (9.75), and floor (9.6).

Bush also posted the highest all around total of all the Level 6 athletes claiming the gold with a score of 38.025.

With the two highest all around scores of the meet both Mia and Avery Coyle will added to the Level 6 South Dakota State All Star team, receiving a special award to recognize this great accomplishment.

Kyra Vandenberg placed second on bars (9.275), posted a 9.15 on beam, placed fifth on floor (9.475), and claimed her individual state title on the vault with a gold winning performance of a 9.3.

Vandenberg was third in the all around with a total of 37.20.

SGA optional coach Lexi Cathcart was overjoyed with the performance of her Level 6 team at the state competition.

“It was so much fun to watch them put up one big score after another.  They started out the season really strong and then struggled a bit mid season,” said Cathcart. “However, they came back with a vengeance at the state meet.”

Their biggest competition in the individual and all around competition cam from their own teammates.

“You put up what you think is a huge score at a 9.5 and then watch your fellow team members follow you with a 9.7 or higher.  This is such an amazing group of athletes,” said Cathcart. “They work well together, they push each other to be better, and they have a strong determination to succeed.”

All eight of the Spearfish team members have far exceeded the qualifying scores needed to advanced to the region four gymnastics championships that will be held April 16-18, in Bettendorf, Iowa.

The seven gymnasts mentioned above will be joined by teammate Sophia Hatleli who unfortunately was sick the weekend of state meet and unable to compete.

“We were able to petition her to Regionals based on her performances earlier in the season,” Cathcart said.

The Level 9 competition went on at the same time as the Level 6 session, and SGA was represented at this level by Kathleen Cook.

“Cook has been working hard all season to upgrade her difficulty to meet the requirements to compete as a Level 9 and met her goals for the state competition,” said Phil Summers, the SGA head optional coach. “After three very successful seasons competing at Level 8, it was time to make the jump to Level 9. It is a huge change in difficulty requirements and Kathleen had to really push herself to put together routines on all 4 events. She definitely accomplished that goal and came away with a bronze medal on bars at the state meet and has also earned her way to compete at the regional competition in Iowa.”

The Level 10, squad from Spearfish finished out the second day of the state championship meet, competing in the final session on Saturday evening.

Spearfish was represented by Savanna Dunwoody, Jasmyn Jimenez and Ruthie Wehrung all competing in the 15 and under age division.

“These three athletes did an amazing job at the state meet,” said  Summers.  “They suffered the most this season from the Covid shut downs and it was just difficult to add new skills and get them in shape to compete safely at this high level of competition. “

Summers added, “Jimenez had been out of the gym for 4 weeks prior to state meet trying to heal some minor back discomfort and Dunwoody had been dealing with some foot issues that has kept her from training full out all year.  To watch them buckle down at state meet and perform so well was very rewarding.”

Summers said that he was impressed by the way the girls battled through injuries.

“For them to come back and win the state championship title was a very thrilling experience. I can’t say enough about what a talented trio of determined, passionate athletes these three young ladies are,” Summers said

Wehrung, the youngest Level 10 gymnast at the championship meet at age 11, proved that just because you are little doesn’t mean you can’t compete with the big dogs.

Wehrung started the meet with her best vault of her career, winning the individual vault title with a score of 9.425.

She moved onto the bars and missed her first attempt at her release move on the high bar.

She shook it off, and got back up repeated the skill successfully and finished her bar routine to end up with a score of 8.625,” Summers said.

From there Wehrung finished out the meet claiming two more individual state championship titles on the beam with a score of 9.55, and floor with a 9.625.

Her all around total of 37.225 edged out Dunwoody for the gold medal.

Wehrung was also named to the South Dakota State All Star team with the second highest all around score of the entire meet regardless of age group.

The top all around total went to senior Dani Sievers, from All American Gymnastics, with a score of 38.925.

Sievers has been a long time Level 10 in South Dakota and will continue her gymnastics career  competing at the University of Oklahoma on a full ride scholarship.

Sievers finished out her last meet in South Dakota, bringing down the house with her amazing floor routine scoring 9.85.

“Dani has been a great role model for all of the young gymnasts from South Dakota and we are excited to follow her career at Oklahoma,” said Summers.  “All three of the Spearfish level 10 gymnasts will join the eight Level 6 gymnasts for the regional championships.

“I am very excited for the Regional Meet this year,” said Summers. “It will be the first time we have taken our Level 6 team to a regional championship meet and our 12 athletes, eight Level 6s, one Level 9, and three levels are the most we have ever qualified. They will do an amazing job representing South Dakota at the Championship meet.”

The final session of the state championship meet was on Sunday morning with the Xcel Silver gymnasts taking to the floor.

SGA was represented by, Lauren Dalton and Alyse Sorcic in the 10-year-old division, and Taylor English, 11, and Alison Cooper, 12.

“Alison did very well for her 1st state competition,” said  Veronica Jenkins the SGA Excel coach. “It was a great learning experience for her and we were very pleased to see her come home with a medal from the beam competition.

English, Sorcic and Dalton all competed in the afternoon session.

She finished the meet with an all around total of 36.025.

“Our Silver Xcel gymnasts did a fine job at state meet,” said Jenkins. “I was so happy to see them all place on at least one event and come home with some hardware to mark their accomplishments. for this year.”