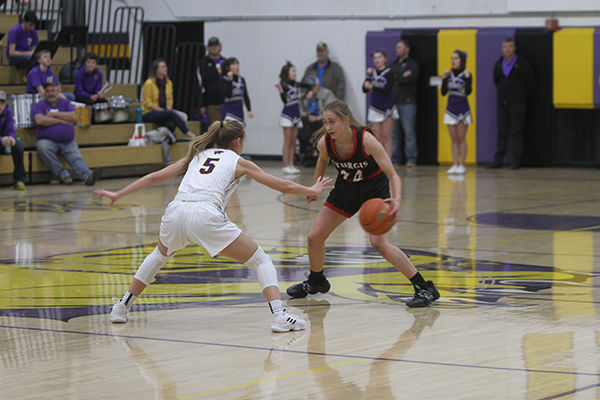 Sturgis Brown’s Tatum Ligtenberg brings the ball up the court while being pressured by Custer’s Mallory Delmont. Pioneer photo by Tim Potts 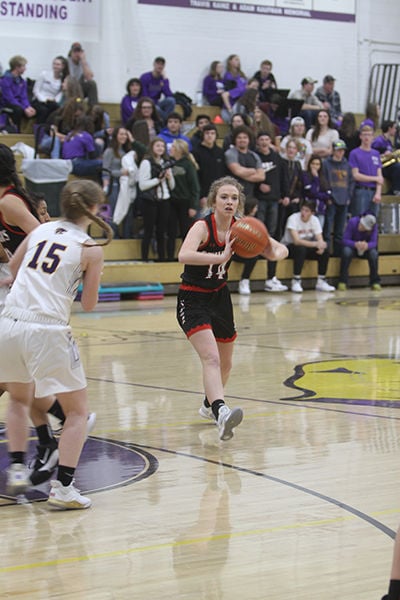 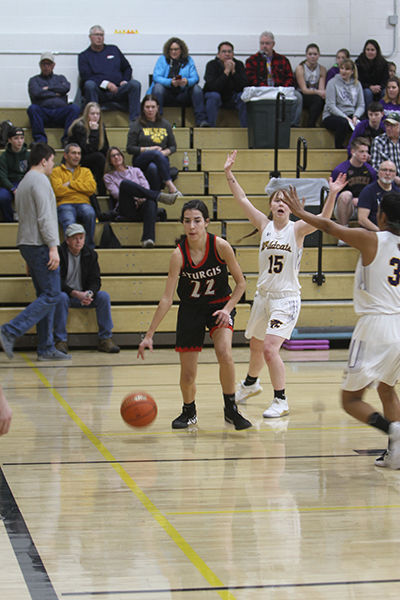 Sturgis Brown’s Tatum Ligtenberg brings the ball up the court while being pressured by Custer’s Mallory Delmont. Pioneer photo by Tim Potts

CUSTER — The Sturgis Brown girls’ basketball team fell 42-39 to the Custer Wildcats on Saturday, in Custer.

The Scoopers led the majority of the game and were up by 11 points at the beginning of the third quarter, but lost the lead for the first time with just under a minute left in the game.

“We still have yet to have the five I need out on the court most of the time. I did think we executed better in the first half. We rebounded better, and we were not flustered in the first half,” said Jordan Proefrock, Sturgis’ head coach.  “They went to a zone, we get the grip, we let them chip away and get back into it, and we got flustered.”

The Scoopers opened the game with an 8-0 run, and held the Wildcats from scoring for over five minutes, leaving the score at the end of the first, 10-4, in favor of Sturgis Brown.

Sturgis Brown’s Kylie Shaw had a big second quarter, with two 3-pointers and a field goal, and was chosen to shot free throws on a technical violation on Custer, and finished with 10 points in the first half. Sarah Janz added five free throws, leaving the Scoopers in front 29-19 at halftime.

“The second half, we just did not execute. We did not play good defense, and that is what happened,” said Proefrock.

Custer head coach Mick Patzlaff  said his team gave up too many scoring opportunities to the Scoopers in the first half.

“We put the Scooper girls on the line 18 times in the first half, and in the second half, we did not want to give them any more, and they were having a tough time scoring from the floor. We just had to stop beating ourselves,” said Patzlaff. “We came out in the second half and executed better, switched up the defense a little bit, pressed a little bit, and attacked the           basket.”

The third quarter was difficult for both teams with Custer outscoring Sturgis Brown, 7-5, but the Scoopers led 34-26 after three quarters of play.

Custer’s Josey Wahlstrom started the run to close the gap at the beginning of the fourth quarter, scoring seven points.

Kellyn Kortemeyer scored a field goal with under a minute to play, to give the Lady Wildcats their first lead, 40-39.

“Our inexperience at some positions showed. We did not rebound well, only 23 rebounds in the entire game.

“That is not us, and we will not win many games rebounding like that,” Proefrock said.

Patzlaff praised the play of Wahlstrom.

“Our point guard, Wahlstrom, did a phenomenal job in the second half, in getting to the rim and pushing the tempo, which is what we wanted to do,” Patzlaff said.

Sturgis was led in scoring by Kylie Shaw with 12 points and three rebounds.

Sturgis, now 2-5 on the season, will travel to Rapid City Central, Thursday.