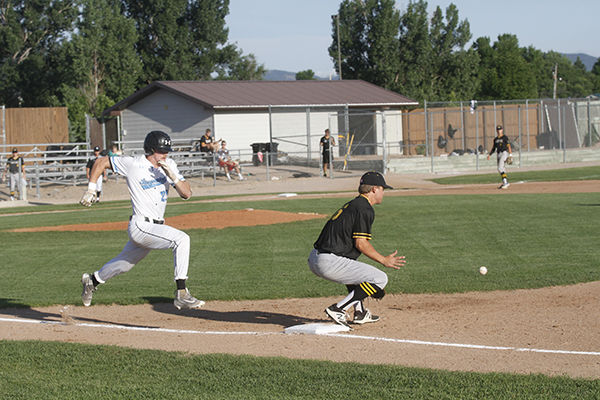 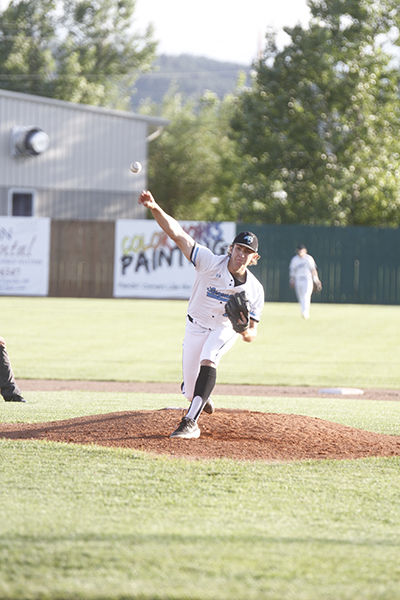 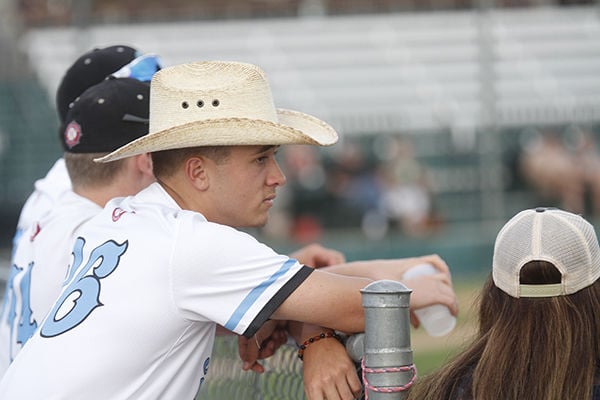 Spearfish’s Dylan High sports a cowboy hat during the Country Night promotion as he watches the game from the dugout. Pioneer photos by Jason Gross

Spearfish’s Dylan High sports a cowboy hat during the Country Night promotion as he watches the game from the dugout. Pioneer photos by Jason Gross

“We didn’t beat ourselves; they beat us,” Spearfish head coach Adam Core said of the visiting Sodbusters. “They were really good on the mound, had 21 hits, four home runs.”

Joe Yorke doubled in the first inning to score Josue Rangel and put Spearfish ahead 1-0. Brent Richey tripled two batters later to plate Z Westley and Yorke as the Sasquatch edge grew to 3-0.

Hastings responded with four runs in the second inning and one in the third to take a 5-3 lead. Will Richardson’s solo home run and Donovan Murray’s two-run single highlighted the second.

The Sodbusters added four runs in the fourth, five in the fifth, and one in the sixth en route to a 15-3 edge. Ryan McDonald hit a three-run home run in the fourth. Fifth-inning action included two home runs: a solo shot by Wyatt Anderson and a three-run shot by McDonald.

Hastings collected six runs in the eighth to go ahead 21-3.

Spearfish ended the scoring in the ninth. Dillon Holiday drew a leadoff walk and scored on a Rangel double.

Rangel finished with one run and two hits for Spearfish, who also received three hits from Richey. Brayden Spears was tagged with the pitching loss.

Core said Hess mixed up spots with the fastball, and Spearfish batters were chasing pitches.

“I think we wanted to try to do too much at the plate,” Core said of the team’s batting approach. He added players were not ready to hit on a two-strike count.

Brent Richey  had two hits for the Sasquatch.

Brayden Spears pitched four innings and gave up 10 runs on 11 hits, he walked two, and struck out three.

The game was delayed two hours and 15 minutes due to rain.

Spearfish scored two runs in the second and another run in the third to grab a 3-0 lead.

Hastings scored a run in the fourth, then exploded for seven runs in the fifth to take the lead 8-3.

The Sasquatch got its offense going, scoring five runs in the bottom of the fifth to tie the game at 8-8.

Spearfish plated a run run in the sixth, five runs in the seventh, an another run in the eighth to cruise to the win 17-10.

Josue Rangel had two hits and scored three runs in his final appearance for the Sasquatch.

Hunter Davis started the game for the Sasquatch but was not the pitcher of record.

Logan Hewitt came in and pitched a third of an inning giving up three runs on two hits, walking four and striking out one.

Elijah Ecton was the einning pitcher going two and two-thirds innings, he gave up no runs on three hits, and walked two.

Brandon Saucy and Doc Dillon closed out the game for the Sasquatch.

Spearfish (6-13 seconf half of the season, 24-24 overall) embarks on a six-game road trip starting Tuesday at the Badlands Big Sticks.