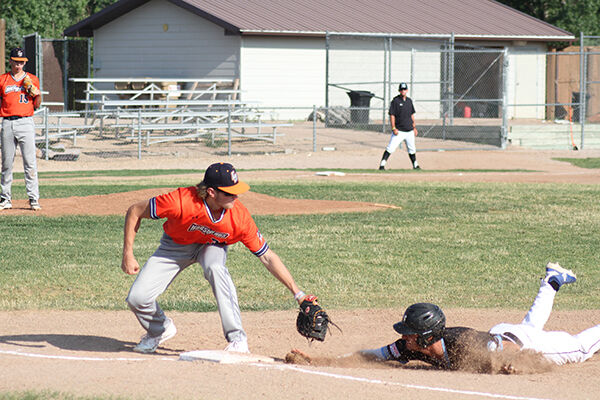 Spearfish Sasquatch player Theo Hardy, right, dives back to first base as Casper infielder Eric Erato tries to apply the tag. Hardy and his teammates earned a split in the Expedition League doubleheader played Thursday in Spearfish. Pioneer photo by Jason Gross 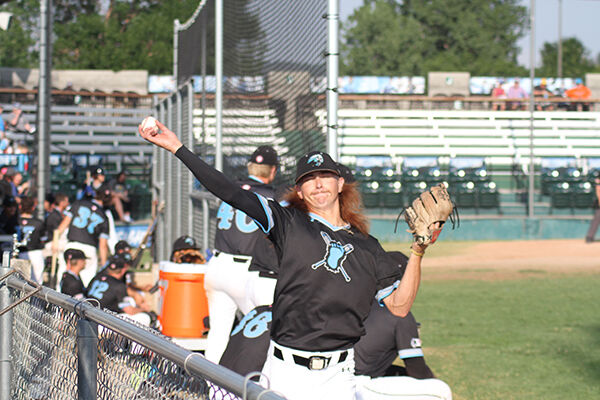 Riley Moran of Spearfish warms up near the dugout during the first game. Pioneer photo by Jason Gross

Spearfish Sasquatch player Theo Hardy, right, dives back to first base as Casper infielder Eric Erato tries to apply the tag. Hardy and his teammates earned a split in the Expedition League doubleheader played Thursday in Spearfish. Pioneer photo by Jason Gross

Riley Moran of Spearfish warms up near the dugout during the first game. Pioneer photo by Jason Gross

The home standing Sasquatch posted a 26-9 victory in the opener, which was a continuation of a Wednesday game that was suspended in the fifth inning because of weather. Casper won the nightcap 4-3 in a contest that lasted seven innings instead of the traditional nine.

“Mixed bag at best, would probably be the exact best way that I could phrase it,” Spearfish head coach Jarrod Molnaa said.

Spearfish erased a 7-5 deficit and went on to set a franchise record for most runs in a game.

Play on Thursday resumed in the top of the fifth, with the score 5-5. Casper plated two runs to go ahead 7-5.

Spearfish loaded the bases with one out in its half of the fifth. R.J. Galvan’s single scored Theo Hardy and Charles McAdoo as the Sasquatch forged a 7-7 tie.

Seth Surrett scored on a wild pitch to put Spearfish ahead 8-7 in the fifth. A Ryan Bachman single plated Galvan and extended the Sasquatch edge to 9-7.

A walk reloaded the bases with two outs in the fifth. Hardy laced a triple to score Matt Crossley, Bachman, and Johnny McHenry as Spearfish’s lead grew to 12-7.

Spearfish put up four runs in the sixth and extended its advantage to 19-7. Parker laced a two-run double to lead the charge; Bachman and Galvan crossed the plate.

The visiting Horseheads used a two-run seventh and stayed within 19-9. Crossley belted a solo home run in the bottom of the seventh for a 20-9 Spearfish lead.

Spearfish ended the scoring by tallying six runs in the eighth. Hardy hit a bases-loaded home run to score Chandler Ibach, Bachman, and McHenry before himself and lead the hitting in that frame.

“Unfortunately, the big thing that stands out is 10 walks,” Molnaa said. “We’re not going to beat anybody walking 10 guys. They (Casper) score four runs and got 10 free bases.”

Spearfish got on the scoreboard in the first when Johnny McHenry came home on Charles McAdoo’s single. The Sasquatch used Ryan Bachman’s sacrifice fly to plate R.J. Galvan and forge a 2-2 tie in the second.

Casper tallied a run in the fourth for a 3-2 edge. Ryan Callahan came home on Kyler Halverson’s single.

Two singles and a walk with no outs loaded the bases in Spearfish’s half of the fifth. However, a double play and strikeout ended the threat and left the score at 3-2.

Casper used three walks to load the bases with no outs in the sixth. Herter was hit by a pitch, bringing home Preston Joye and extending the Horseheads’ advantage to 4-2.

Ben Parker laced a one-out double in the seventh to plate Theo Hardy and bring the Sasquatch within 4-3. Spearfish loaded the bases with two outs but could not score the tying run.

McHenry turned in a one-run, two-hit effort for Spearfish, which also received three hits from Jacob Sanchez. Juan Milera was tagged with the pitching loss.

Owen Vanthillo claimed the pitching victory for the Horseheads. Herter, Lopez and Joye each scored one run and added one hit.

Spearfish is now 3-4 in the season’s second half, with an overall mark of 24-13. The Sasquatch will host the Canyon County Spuds in a weekend series, with the first game to begin at 6:35 p.m. Friday.

“That’s the beautiful thing about the game. It’s 0-0 starting in the top of the first tomorrow afternoon,” Molnaa said.

Seven Spearfish players earned spots on the All-Star team, with festivities set for July 19-21 in Casper: