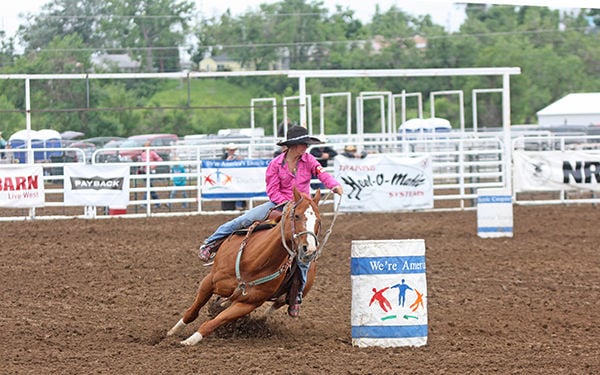 Rickie Engesser and her horse Rowdy round a barrel during the 2014 barrel racing event at the South Dakota High School Rodeo finals. Engesser secured the state title in this event that year. Pioneer file photo 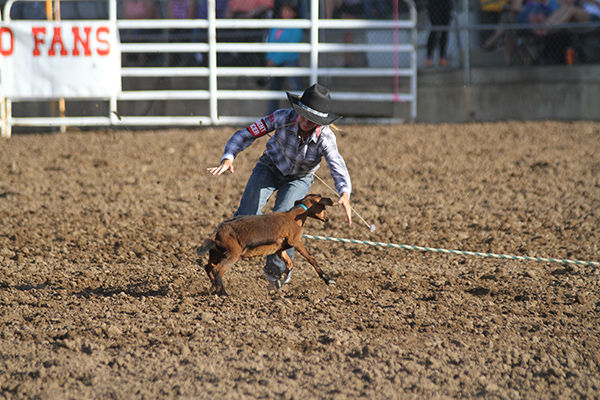 Rickie Engesser and her horse Rowdy round a barrel during the 2014 barrel racing event at the South Dakota High School Rodeo finals. Engesser secured the state title in this event that year. Pioneer file photo

A chance to do what she loved stands out just as much to her from those days as the individual honors.

“It was really good just getting the opportunity to be able to rodeo,” said Engesser, who won the 2014 barrel racing title and the 2016 goat tying championship. “Coming out on top of those two events was something I will always remember.”

Engesser’s goals going into those seasons did not focus on state championships or particular times. They centered on having confidence in her horse and herself.

“I wanted to just go in and do the best I can to make the runs I can, and just try to be solid all the way around,” Engesser said. She met most of her goals in both years.

Engesser’s practicing for state that year mirrored what she had done for the regional rodeos. “I just made sure I was prepared for what I was going into,” she added. The aim was to look at state as another rodeo.

She qualified for barrel racing’s short go-round and turned in a time of 17.486 seconds. That gave her nine standings points en route to 84 for the season and a state crown.

“Honestly, it was an emotional one,” Engesser recalled. Her older sister Taylor won the College National Finals Rodeo in that event the previous day. Both rode the horse named Rowdy.

Fast forward to 2016, when Rickie Engesser emerged victorious from the goat tying event. A 7.12-second time in the short go was good for 10 standings points. She finished with 77 points on the season.

Engesser’s thoughts upon clinching the title were similar to those in 2014.

“A title is huge, and getting to have one of your own is even bigger,” she said. “It’s just everyone that helped you, being thankful for getting to do this, and having the opportunity to go even further with that event.”

The top four finishers in each event at state qualified for nationals.

Engesser competed in high school barrel racing and goat tying for four years. What did she enjoy the most?

“The competition was always fun, but it was just the atmosphere,” Engesser said. She cited the people that she met, the friends supporting her, and being able to do what she loves.

Challenges always exist in rodeo. Engesser had a no time in the goat tying short go-round in 2013. She cited the 2015 state finals in which a downed barrel in the short go-round ended her hopes of a second straight state title.

“I was a little worried going into it (2014 state final) because the second barrel is always the shortest,” Engesser said. “Once I got by that, I was pretty happy.”

Goat tying’s rapid-fire nature appealed to Engesser the most. It requires a rider to make no mistakes while riding a horse and quickly getting to a goat.

That speed also posed the biggest challenge. “The faster you start out, the more you’re worried about catching a toe, or tripping and falling as you’re trying to get to your goat,” she said.

Her high school memories would not have changed if state titles were not part of the equation.

Engesser graduated from Spearfish High School in 2016 and Gillette College in 2018, with an associate of science degree.

She transferred to Tarleton State University in Stephenville, Texas, where she will graduate in August. Breakaway roping, barrel racing, and goat tying are her college rodeo events.

Then, she will begin work on her master’s degree in consumer research and science.

“Rodeo has taken me in a whole different direction,” Engesser said in citing the life lessons she has learned. She added going to Texas required a huge leap of faith, but she has met great people and has great coaches.

High school rodeo prepares a person for college if that person takes advantage of high school practice times and trying to be their best, Engesser said.

“It’s different, but everyone’s working at it, and everyone should do their best,” she said. “They just have to put their mindset to it.”

Tarleton State lost four rodeos this season because of the COVID-19 pandemic. Engesser keeps the disappointment in perspective.

“I feel so bad for a lot of those seniors. It was their last year of rodeo,” she said. “It’s a hard way to go out.”

Engesser will be able to compete for one more year, although she is a senior. Going into the master’s program gives her that extra time.