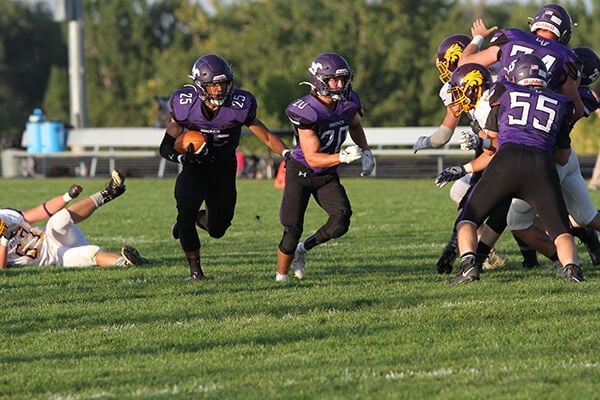 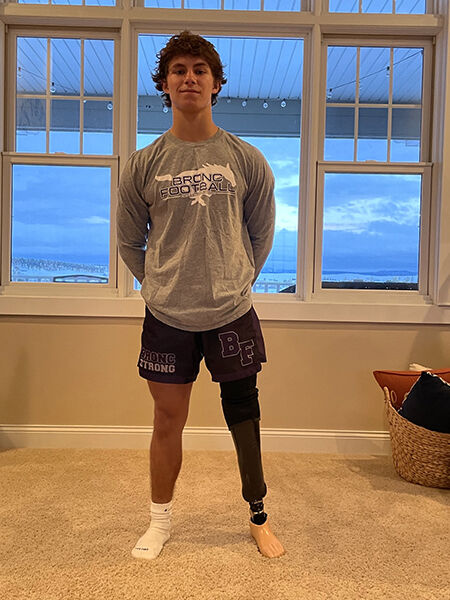 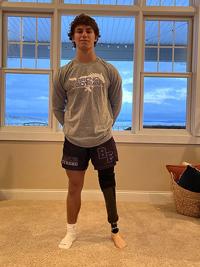 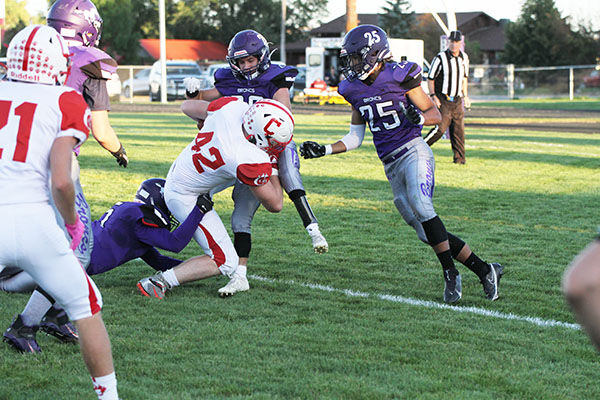 BELLE FOURCHE — Belle Fourche High School sophomore Logan Tyndall does not back down from challenges of any type.

Tyndall appears no different from his peers on the football field or wrestling mat, except for something that is not readily apparent.

The 16-year-old has used a prosthetic leg for roughly 15 years.

He was born with a condition known as Fibular Hemimelia, which means a fibula was short or missing. Other bones in the leg, ankle, and foot may also be affected.

“There were just a lot of unknowns for us at the time because we had never heard much about it or dealt with it,” Logan’s father Mike said in describing that early time.

Mike recalled Mayo Clinic physicians gave the family two options. One was for Logan to use crutches for the rest of his life; the other was to amputate the foot above the ankle. Amputation of the foot and ankle occurred when Logan was about 11 months old.

“The pediatric surgeon told us he would lead a pretty normal life with prosthetics,” Mike said.

Logan’s prosthetic goes up to the knee and is hollowed out. It takes the place of the lower leg.

Logan tried to keep up with his older brother Jackson. “Our attitude was just, ‘Anything he wanted to do, we’ll let him do it. We’ll let him try it,’” Mike said.

Mike said everyone in Belle Fourche has truly supported Logan.

Logan recalled using humor in reacting to this situation up to the time he started school. He reacted in other ways as well.

“I just tried to not really think about it that much,” he said. “I tried to just live a normal life.”

Logan said he did not treat himself differently from other kids his age. He agreed they did not make him feel different from them.

What were things like for Logan when he was in grade school? “I was never really made fun of for it,” he said.

“I think all the kids thought that it was something different, something cool,” Logan recalled. “I’d say it helped me make friends, if anything.”

Logan said the biggest challenge he faced centered on the pain that the prosthetic leg caused.

Weight lifting entered Logan’s life when he was a sixth-grader. He took it as part of a school class.

“I think I just started weight lifting so I could get bigger and stronger for sports,” he said.

Competing in sports and spending time with friends has helped Logan cope with his unique situation.

“It allows me to think that I’m no different from anybody else on that field,” he said. “I’m still playing with kids who are normal, so I can treat myself like a normal kid, too.”

Logan’s coping levels have stayed pretty consistent over the years.

“I came to the realization that no matter what, it’s never going to change,” he said. “There’s nothing I can do about it, so I kind of just have to live with it and make the best out of it.”

His philosophy centers on accepting that things out of a person’s control cannot really be changed. “You just need to make the best of them,” he said.

Logan has met people who learn for the first time about his prosthetic leg. The most common reaction is to ask him what happened and why.

The fullback-linebacker most looks forward to more chances of playing sports with his friends, and becoming a better athlete, throughout the next couple of years.

Logan will step onto the wrestling mat when the football season ends.

He most looks forward to having a full campaign, which he was unable to do last season because of injury.

“I just remember noticing that the kid with one leg was a very good athlete,” Slotten said of Logan, who was a fourth-grader at the time. “He had great charisma and positivity about his leg.”

Slotten said Logan brings constant effort whether in the classroom, weight room, on the field, or in the community helping youth. Logan has a great attitude and always strives to be his best, according to Slotten.

“He never uses it as an excuse and is always there busting his butt,” Slotten said of Logan. Slotten added Logan’s teammates know of his talent and the hard work he has put forth.

Slotten said Logan has progressed quite well over the past couple of years.

“Not many guys his size would take the challenge on of being a fullback, but he has embraced it and he is as hard-nosed as it comes.

“He will continue to get stronger and better,” Slotten added. “He has a great future in Bronc football and in life.”