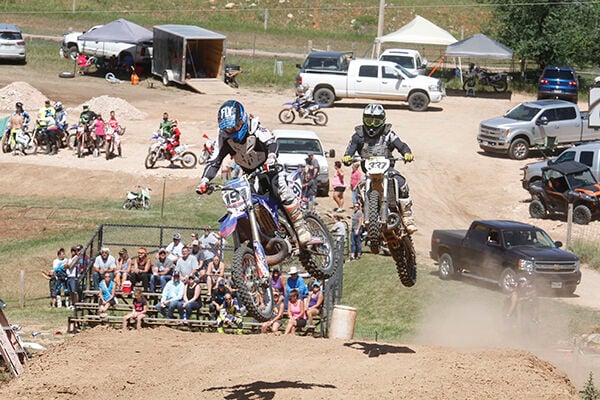 Riders in the Vet A class get ready to begin another lap. Pioneer photo by Jason Gross 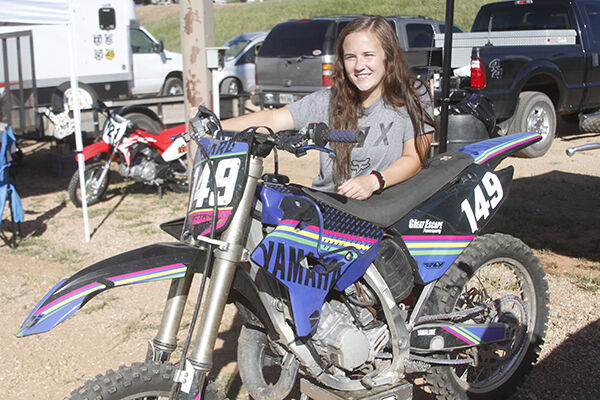 Sophie Bullard returned to the motocross track on Sunday, three months after a concussion forced her season to be cut short. Pioneer photo by Jason Gross

Riders in the Vet A class get ready to begin another lap. Pioneer photo by Jason Gross

Sophie Bullard returned to the motocross track on Sunday, three months after a concussion forced her season to be cut short. Pioneer photo by Jason Gross

STURGIS — Many motocross racers use Sturgis as an opportunity to continue their current seasons. That is not the case for Pierre’s Sophie Bullard.

Bullard competed in the Women’s Open and Open C classes Sunday in what she described as her first racing action of the season.

“I had an accident in May, so I haven’t been riding,” the 20-year-old Bullard said. She agreed she was feeling a bit of anxiety on Sunday.

Bullard was bucked off her bike in Mandan, N.D., and sustained a concussion. She was able to stay active during the ensuing weeks.

“A doctor told me that now, they want you to stay active and not rest and sit in a dark room,” Bullard said. She agreed she was excited and relieved to get the go-ahead to return to the track.

Bullard started riding at age 3 and took up racing 10 years later. It is truly a family affair, as they own the Yamaha dealership in Pierre.

“We had a little track back home, and I had a little PW 50 that I rode for about three years,” Bullard said in recalling some of her earliest racing memories.

Injuries are also included in those recollections, one of which was a broken tailbone at one of her first races.

Geography else keeps her coming back here.

“We’re kind of in the middle of the state,” she said. “So anywhere we go isn’t very far, and I like racing in state.”

Bullard has not raced on the Sturgis track since it was changed but said she really likes the hills on the course’s back portion.

Past years have found Bullard earning top-three status in the women’s divisions. She considers the class C competition as a chance for extra riding time.

Bullard has a lot of fun competing against other female racers. “I feel like it’s been getting bigger through the years. There is a good group of us that lives around here.”

Indoor events can feature 10 or 11 entrants in a women’s division, Bullard said.

She considers herself on the same general level as other female racers but said competition against males pushes her a bit harder.

Winning and competition appeal to Bullard the most.

Her biggest challenge centers on the start. “I’m a little short for my bike, so I have to have everything perfect before I go,” she said.

Going from an 85 to a 125 posed quite an adjustment for Bullard. “We had to cut out my (motorcycle) seat; we had to lower it,” she said.

“We had to do a whole bunch to it, but I’ve ridden a lot better with a bigger bike.”

The day of a race finds Bullard getting on the line and going. She agreed it is a matter of doing her best and having as much fun as she can.

Following Sturgis, Bullard planned to enter one more outdoor event before the indoor season begins. She competes once a month during that time (October through March), with races held at Rapid City’s James Kjerstad Events Center.

“It’s a lot of fun; it’s a smaller track,” Bullard said of the indoor circuit. She added those races are much quicker than they are outdoors.

Bullard considers motocross racing as more of a side hobby than anything else. She graduated from Mitchell Vo-Tech in May, earned a Radiology Technology degree, and works at the Pierre hospital.