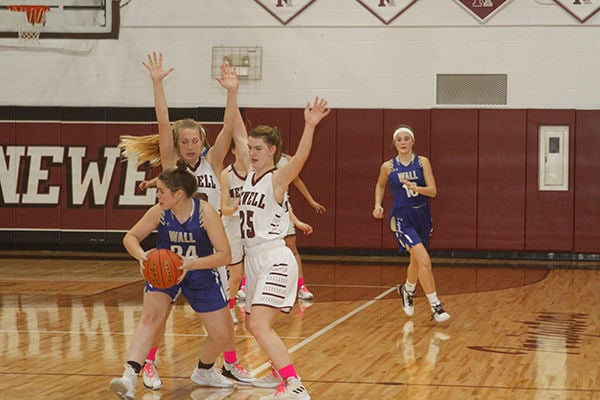 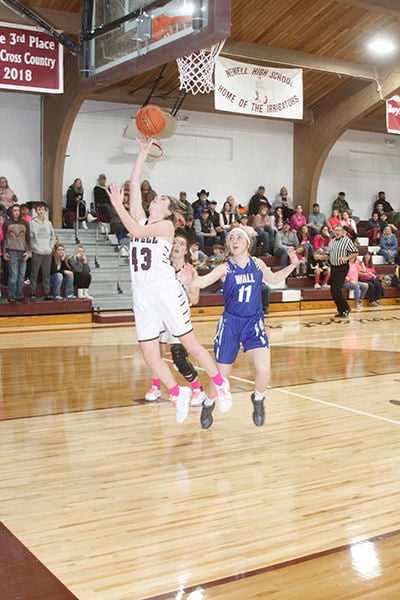 Kayden Steele of Newell shoots for two of her 30 points as Wall’s Keaunna Poor Bear can only watch. Pioneer photo by Jason Gross 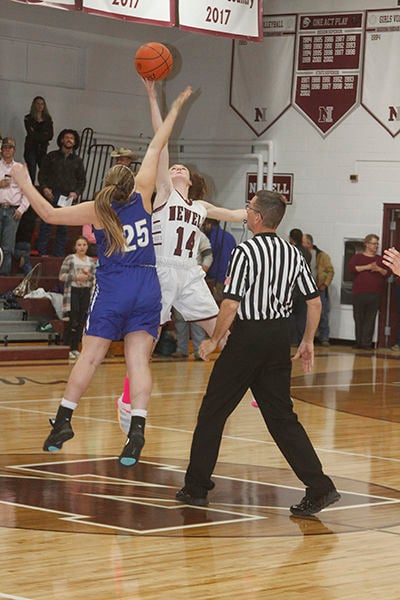 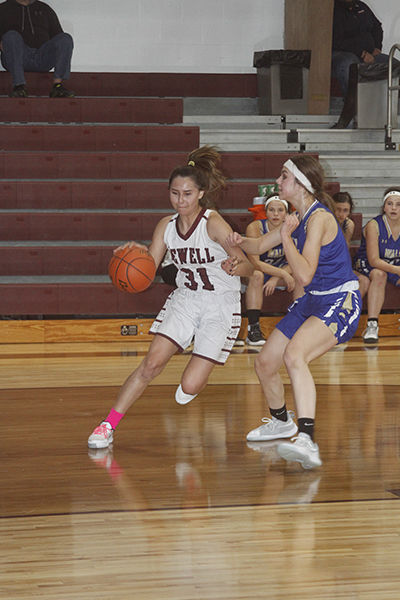 Kayden Steele of Newell shoots for two of her 30 points as Wall’s Keaunna Poor Bear can only watch. Pioneer photo by Jason Gross

NEWELL — The Newell varsity girls’ basketball team scored 20 points in the first quarter Tuesday evening and defeated Wall 60-45 at Austin Auditorium in Newell. With their fourth straight win, the Irrigators improved to 6-1.

“We’re kind of built for speed, and we got to have some controlled chaos,” Newell head coach Scott Wince said. “The faster the game for us, the better.”

Kyla Emmert, Lexa Burtzlaff, and Kayden Steele combined to give Newell a 6-0 lead. Following a field goal by Wall’s Lily Wagner, the Irrigators went on an 8-2 run. Steele’s steal and layup put Newell ahead 14-4.

Wagner scored to keep Wall within 14-6. Steele and Burtzlaff countered for Newell, whose lead grew to 18-6.

Wall sliced the margin to 20-15 early in the second quarter as Wagner netted two free throws. Steele, Kassidy Weeldreyer, and Austin Alexander highlighted an 8-2 run that opened Newell’s lead to 28-17.

Dinger converted a layup in the third quarter as Wall closed the margin to 45-37. Emmert’s jump shot and Steele’s 3-point field goal enabled the Irrigators to lead 50-37.

The Eagles trailed 50-40 after three quarters but stayed within 52-45 on Dinger’s 3-point field goal in the fourth. Alexander’s short-range basket started an 8-0 run that sealed the win for the Irrigators.

Steele finished with a game-high 30 points for Newell. Wince was asked what worked especially well for the junior guard-forward.

Wince said Newell struggles if it has to slow things down and run set plays, as it did in the second half.

The Irrigators excelled at playing uptempo Tuesday, according to Wince. He said some players scored only a few points but played phenomenal defense on backside help.

“Our team effort was phenomenal,” Wince added. “The girls off the bench did what they needed to do; we pride ourselves on hard work.”

Wince said the Irrigators’ start to this season has absolutely surpassed his expectations.

He added the team had goals centering on one game at a time, living in the moment, and taking things one step at a time. He added he did not know the team would be 6-1 at this stage.

“I think we’re starting to jell into a better team,” Wince said. He added the players worked a lot last season on understanding the game of basketball, and that is starting to become evident as this season began.

“They’re starting to understand that they have to stick together, and they have to work five, six, seven deep or we’re not going to be successful,” Wince said.

What improvements would Wince like to see the team make in the coming weeks?

“We’d better learn how to make free throws, or we’re in trouble,” Wince said. He added that has been a stumbling block thus far.

Newell will host first-round games at the West River Tournament that begins Jan. 14.