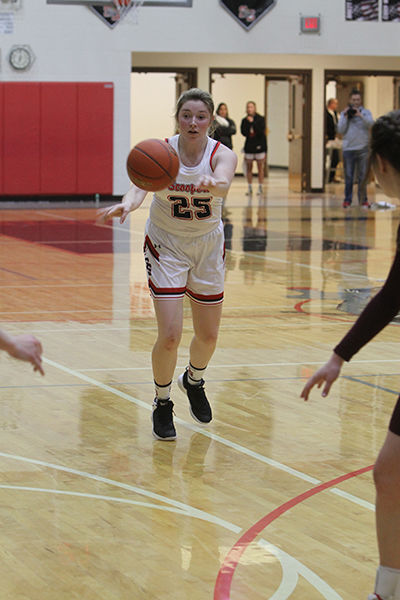 Sturgis Brown’s Sturgis Scooper Emily Gray-Smith passes the ball in a prior game this season to a teammate for a score. Pioneer photo by Tim Potts 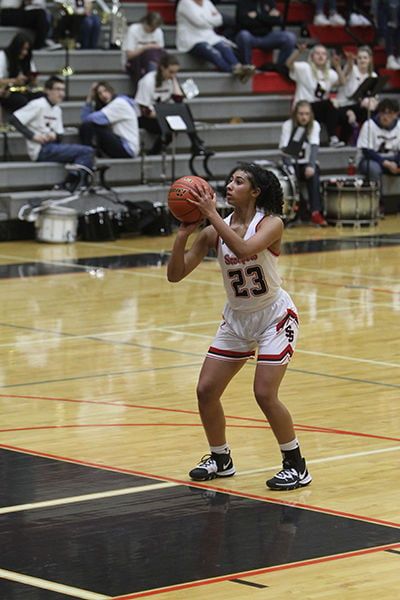 Sturgis Brown’s Sturgis Scooper Emily Gray-Smith passes the ball in a prior game this season to a teammate for a score. Pioneer photo by Tim Potts

The Lady Bucks lead most of the game with the score at the end of the first finding Yankton on top 13-7, and Yankton lead 26-14 at half.

“I thought this weekend we got better. We carried over some things from practice to the games this weekend which is a positive,” said Jordan Proefrock, the Lady Scoopers head coach. “We competed for four quarters against a good, physical Yankton team.”

The Lady Scoopers started out strong in the third quarter, whittling down the Yankton lead to eight, but the Lady Bucks went on a 12-0 run, leaving the score at the end of the third, 43-23, in favor of Yankton, and they went on to get the win, 53-29.

The Lady Scoopers had an aggressive past paced game on Friday against the Spearfish Spartans and fell, 50-45, after leading late in the third quarter, 39-38.

“We lost a heartbreaker on Friday,” Proefrock said.

Sturgis Brown was lead in scoring by Sarah Janz with eight points, Tatum Ligtenberg with six points, and Kylie Shaw with four points.

Leading the scoring for Yankton was Ellie Karolevitz with 14 points, Morgan Strahl with 11 points, and nine points for Sadie Fedders.

The Lady Scoopers are now 2-8 on the season and will host the Hill City Rangers tonight.