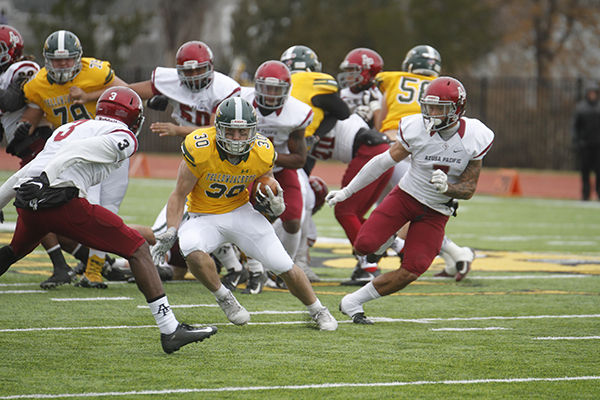 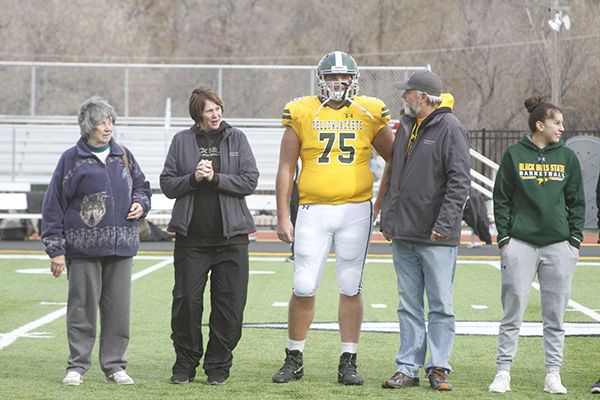 Nate Dewitt of Black Hills State is recognized in a Senior Day ceremony prior to the game. Pioneer photo by Jason Gross 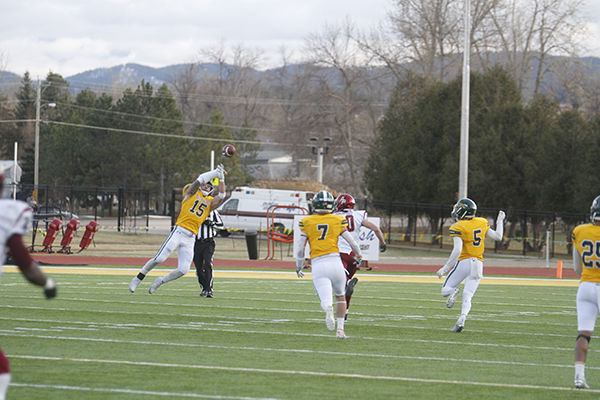 Nate Dewitt of Black Hills State is recognized in a Senior Day ceremony prior to the game. Pioneer photo by Jason Gross

Gilmore found the end zone on a 1-yard run. An unsuccessful conversion try kept the Yellow Jacket lead at 13-0, which stood as the halftime tally.

Azusa Pacific began its next drive on its 18-yard line. The Cougars faced a fourth and 21 fom the Black Hills State 31. A pass play gained only 13 yards, which gave the Yellow Jackets the ball on downs.

Gilmore scored on a 1-yard run to end the possession. An unsuccessful two-point conversion try kept the Yellow Jacket lead at 19-7.

Azusa Pacific later drove from its 38-yard line to the Black Hills State 20. A fourth-and-10 pass fell incomplete, and the Yellow Jackets took over.

Neither team scored the rest of the way.

“I thought our defense played great,” Reiners said. “They definitely had a bend-but-don’t-break mentality, had two big stops on fourth down.”

The running game also played a huge role, according to Reiners.

“He ran tremendously hard,” Reiners said in describing Gilmore. “I thought our O (offensive) line did a good job; we felt like we could run the ball.”

Reiners said the team had extra motivation, as Brett Lamb attended the game. He has battled leukemia for the past few months.

“To have him here was a huge inspiration for our team,” Reiners said.

“They haven’t always had the success here that they wanted, but that wasn’t why they did it,” Reiners said.

“They did it to improve themselves, to be better fathers, husbands, whatever it may be. I’m just so proud of that group.”

Gilmore said it was quite gratifying to be able to turn in a game like this in his Yellow Jacket finale.

“I love scoring touchdowns and everything, but at the end of the day, I think about all the guys that are on that sideline. I think about every single part they play in this program, and I appreciate all their hard work,” Gilmore said.

Senior Day festivities preceded the kickoff. The  seniors and their families made their way to midfield, where the fans acknowledged their efforts.

“As a young guy, you never really think about that coming,” said Gilmore, who observed that ceremony for three years before Saturday. “Before you know it, it’s here.”

Gilmore said he was able to see teammates who left and came back to finish their careers. He added it was quite gratifying.

As for his Saturday success, Gilmore said, Azusa Pacific stacked the line, and that played into his hands.

“If there’s a brick wall, I’m going to try to run through it,” Gilmore said.

“It doesn’t matter what kind of players we have,” he said. “It’s my team, and I appreciate all the work they put in.”

The most special part of Gilmore’s week was being able to see Lamb.

“That dude is a fighter,” Gilmore said of Lamb. “He’s been our inspiration all season, and having him here: it just makes that inspiration 10 times more and stronger.”

Gilmore said it really hurt not being able to see Lamb before the final game.

How will Gilmore remember his time as Black Hills State?