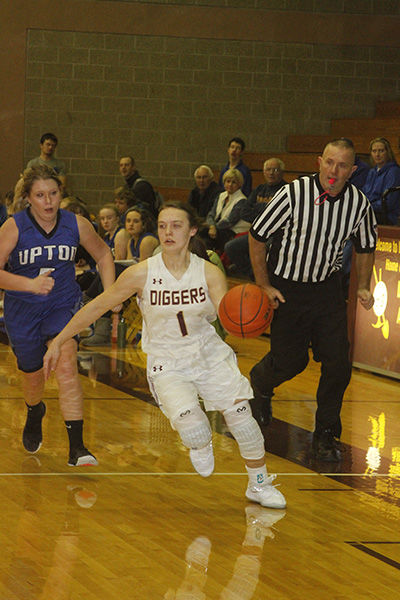 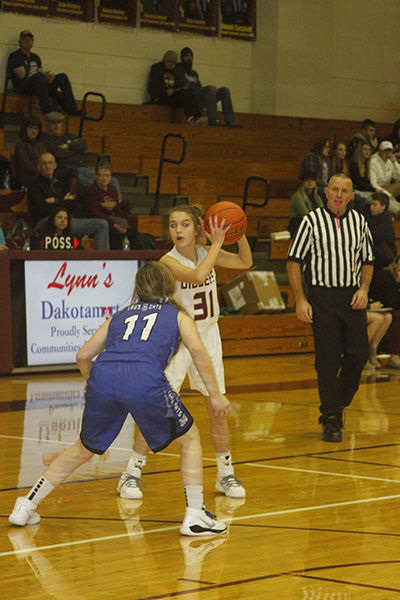 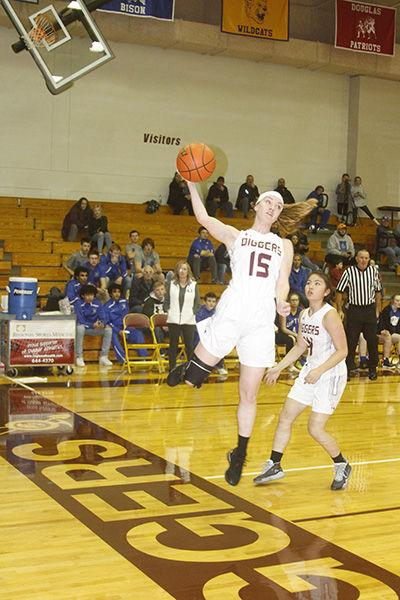 Lead-Deadwood’s Natalie Janssen saves the ball from going out of bounds. Pioneer photo by Jason Gross

Lead-Deadwood’s Natalie Janssen saves the ball from going out of bounds. Pioneer photo by Jason Gross

“In the second quarter, we played about as good a defense as we’ve played all year,” said Golddiggers’ head coach Tim Hansen, whose team took a 30-12 lead into halftime. “We’ve really been asking our front two guards to start applying more ball pressure.”

Upton got on the scoreboard when Alyson Louderback connected from inside. Hannah Campbell (inside basket) and Allison Mollman (steal and layup) propelled Lead-Deadwood to a 12-2 advantage.

The visiting Bobcats closed the margin to 12-6 on two Katlyn Louderback baskets. That was the score at the break.

Mehlberg connected from 3-point range early in the second quarter as the Golddiggers moved ahead 16-6. Upton used a pair of Alyson Louderback free throws to stay within eight points, at 16-8.

Mollman netted a free throw to extend Lead-Deadwood’s edge to 26-10. Mehlberg and Mollman converted layups to open a 30-10 lead for the Golddiggers, who claimed a 30-12 edge at the break.

Upton scored five unanswered points to open the third period. Anna Schiller connected from inside as the Cats trailed only 30-17.

Anna Campbell notched a team-high 16 points for Lead-Deadwood, who improved its record to 6-1. Mehlberg finished with 10 points.

Katlyn Louderback finished with a game-high 18 points for Upton.

The Golddiggers return to action today when they visit New Underwood.

“We’re getting into the grind of our schedule,” Hansen said. He added New Underwood is a tough opponent, with future games including Douglas, St. Thomas More, and Hill City.

Hansen said the Golddiggers are playing very well defensively, but the offense must improve.