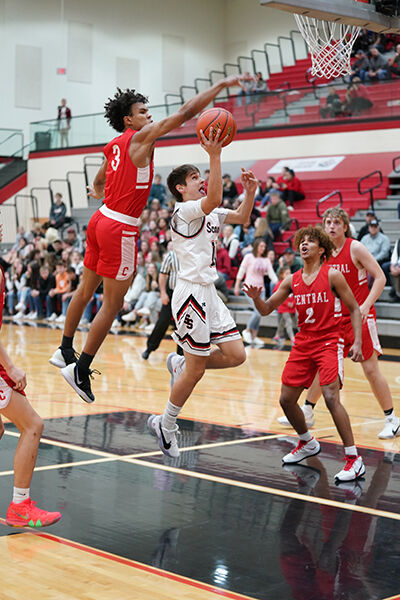 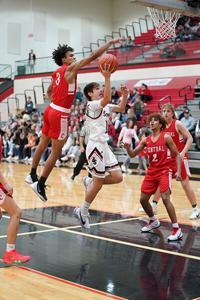 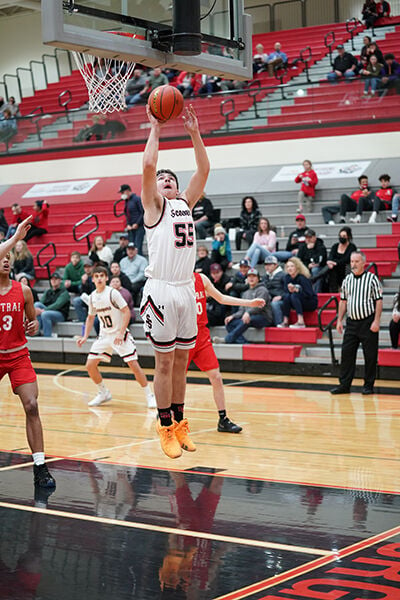 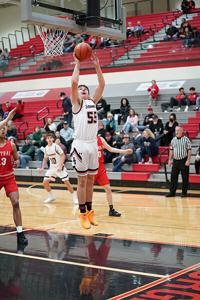 Sturgis Brown’s Owen Cass drives the lane past Rapid City Cobbler Micah Swallow for two points on Thursday at Sturgis. Cass was the leading scorer for the Scoopers with 11 points. Pioneer photo by Tim Potts

Sturgis Brown’s Owen Cass drives the lane past Rapid City Cobbler Micah Swallow for two points on Thursday at Sturgis. Cass was the leading scorer for the Scoopers with 11 points. Pioneer photo by Tim Potts

STURGIS — The Sturgis Brown boys’ basketball team fell to the Rapid City Central Cobblers, 72-48, on Thursday at the West gym in Sturgis.

“They are a very talented basketball team and we just wanted to compete, and I thought we did that tonight, we competed hard” said Derris Buus, Sturgis Brown’s head basketball coach.  “We shared the basketball and only had 13 turnovers, and we have really been struggling with that, and that is just where it is at, but we competed right with them tonight.”

The Scoopers had the scored tied at three early in the first quarter.

The Cobblers Kohl Meisman scored a quick eleven points to take the score to 21-7 at the end of the first quarter.

Gavin Ligtenberg started the scoring for the Scoopers in the second quarter, with a six point run and kept the Cobblers scoreless for nearly the first three minutes of the quarter.

The Scoopers outscoring the Cobblers by four in the second quarter, leaving the score, 33-23 at half time.

Meisman, s senior forward, had 21 points of the Cobblers 33 points in the first half.

“We knew Kohl hurt us in the first half, and we really focused on all three to them, Meisman and the Swallow’s, but a little more on Micah Swallow, as he really makes them go.  We really want to make them work on defense the second half and our ball movement and player movement was good,” Buus said.

The third quarter started off with a quick six points for Sturgis, leaving the score within four points, 33-29, but the Cobblers got hot and went on a 17 point run to leave the score at the end of three, 50-33.

“We had a chance in the third to keep things in rap but they were pretty strong and were tough to defend,” Buus said.

The Cobblers outscored the Scoopers by seven points in the fourth to take the win, 72-48.

“I was so proud of our kids, proud of their effort, I told them in the locker room there are so many lessons we could learn this season, we are a close team and that is why we share the ball so well,” said Buus.

Leading the scoring for the Scoopers was Owen Cass with 11 points, five assists, three rebounds, and two blocks.

Gavin Ligtenberg and Dysen Peterson both scored 10 points each, followed by Tyan Buus with eight.

The Scoopers shot 18 of 44 for 41 percent from the field, five of 11 for free throws and had they had13 turnovers.

Four Cobblers scored and they were led by Micah Swallow with 27, Kohl Meisman with 23, Julian Swallow with 16 and Rio Nutter with six.

The Cobblers shot 28 of 49 for 57 percent from the field,  six of seven from the free throw line, ten turnovers, and 24 rebounds.

The Scoopers are now 1-8 on the season and will travel to Spearfish on Jan. 19 to take on the Spartans.