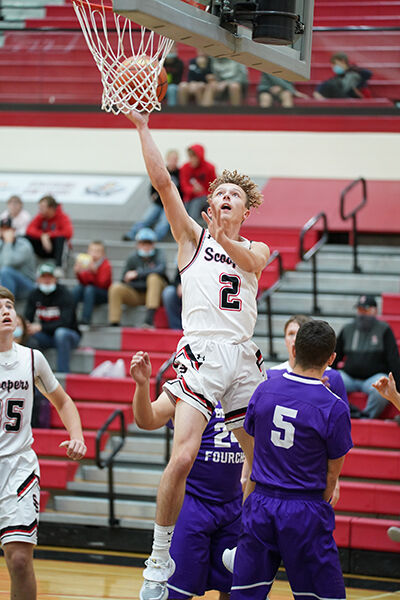 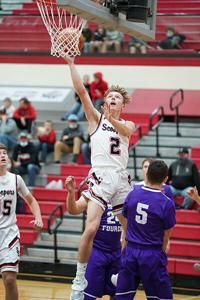 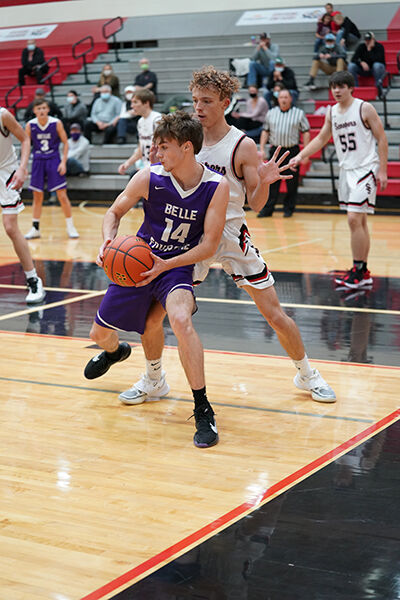 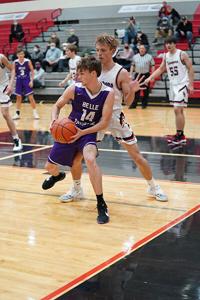 Aiden Giffin, of Belle Fourche, pulled down a rebound while being defended by Thor Sundstrom. Pioneer photo by Tim Potts

Aiden Giffin, of Belle Fourche, pulled down a rebound while being defended by Thor Sundstrom. Pioneer photo by Tim Potts

The first quarter started slow for both teams, with the Broncs leading at the end of the first 12-7.

The Scoopers struggled in the second quarter and scored only four points, while Belle came rang up 20 points, leaving the half time score 32-11 in favor of the Broncs.

“We had another great first half, just like last week against Hill City, and I told the boys it may have been one of the best first half of basketball I have seen Belle Fourche play since I have been coaching here,” said Clay Pottorff, the Bronc’s head basketball coach. “I took a little bit of the blame for the third quarter performance as I may have got the team a little to hyped up in the half time locker room, but that was a fun half.”

“Belle Fourche came out in a 1-3-1 trapping zone, and they have some long athletic kids, that are smart players. It is really hard to play against that zone until after you have play against it in a game and it took us a little while to get it figured out,” said Cass,. “We got a few good looks in the first half that we just didn’t convert and for the most part they made us struggle with that zone.”

The Scoopers pulled the game within three points, 39-36 with just over four minutes left in the game, but Belle Fourche held on for the win.

The Scoopers held the Broncs scoreless for almost the first five minutes of the third  quarter, until Aiden Giffen scored for the Broncs.

“We got a little complacent and they got some rhythm, they have some shooters, so I am just glad we were able to withstand their run,” Pottorff said.

For the Scoopers, Owen Cass lead the scoring with 11 points followed by Thor Sundstrom with 10 points, and Carson Pankratz with seven poinnts.

The Scoopers had seven players score during the game.

“The Scoopers with a little experience will be really tough by the end of the season, and no one will want to play them for the next couple of years,” Pottorff said.

The Scoopers will travel to Aberdeen Central for a game on Saturday.