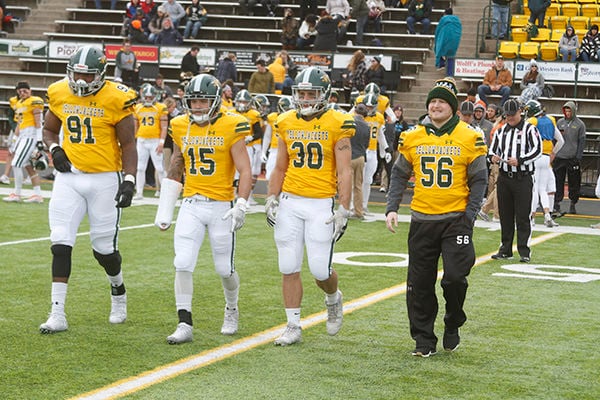 Sam Garcia, left, and Brett Lamb share a moment after the coin toss. Lamb has battled leukemia for the last few months and served as an honorary captain for Black Hills State University’s football game on Nov. 16. Pioneer photo by Jason Gross 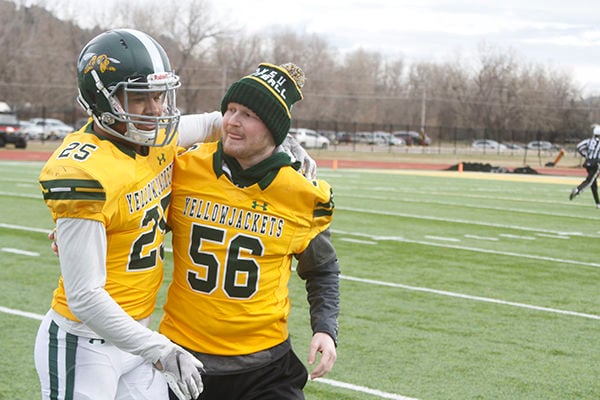 Sam Garcia, left, and Brett Lamb share a moment after the coin toss. Lamb has battled leukemia for the last few months and served as an honorary captain for Black Hills State University’s football game on Nov. 16. Pioneer photo by Jason Gross

SPEARFISH — In June, Brett Lamb’s life was turned upside down.

Lamb, a Black Hills State University football player, was preparing for his junior season, when he was diagnosed with acute lymphoblastic leukemia (ALL) diagnosis and recommended he be transferred to Medical City Children’s Hospital in Dallas, Texas where, because he was under the age of 25, he could be treated under the more aggressive pediatric protocol.

Leukemia is cancer of the body’s blood-forming tissues, including the bone marrow and the lymphatic system.

Fast forward five months later, and Lamb was in the sideline at Lyle Hare Stadium in Spearfish, cheering on his teammates in its final regular-season and home game.

Lamb was named an honorary captain and took part in the coin toss before the game.

Then, from the sidelines, he cheered his teammates to a 19-7 win over Azusa Pacific.

Before the game, Lamb was soaking it all in on the field, watching his teammates go through pre-game warm-ups.

The past few months have been topsy-turvy for Lamb.

A couple of times he has spent up to two weeks in the hospital with an infection, as well as going for his regular chemo treatments, but through it all he remains positive and upbeat.

“It’s been tough. Chemo is not easy, but with my family and friends being there, it has helped a lot,” Lamb said. “You just have to push through it every single day, and take things day by day, hour by hour, and just continue fighting.”

Lamb gave an update on his battle with leukemia.

“I’m doing good. Right now I’m kind of in the middle of the consolidation phase, which is the second phase before I hit maintenance. Maintenance is when I’ll be getting one treatment of chemo once a month for about two years,” Lamb said.

Lamb still has hopes of returning to play football for Black Hills State in the fall of 2020.

“It’s looking good. I won’t be able to play football in the spring, but I plan on playing football in the fall,” said Lamb. “It’s going to come with a lot of motivation and hard work, and I know I can get there.”

Lamb said he appeciates all the support he has gotten as he continues to battle leukemia.

“I want prople to know I am doing OK. I’m fighting. It is difficult, but there’s a lot of difficult things in life. Staying positive is very important. Not looking at all the downs, just staying positive,” Lamb said.

The costs of these treatments are high, and his family does have insurance, but that doesn’t cover all the out-of-pocket expenses.

A Brett Lamb Donation Fund is set up at Wells Fargo, in Spearfish, as well as a GOFUNDME account: Support Brett Lamb – Fighting Leukemia at www. Gofundme.com, where people may make donations to help the family defray some of the costs of the treatment that their insurance doesn’t cover.