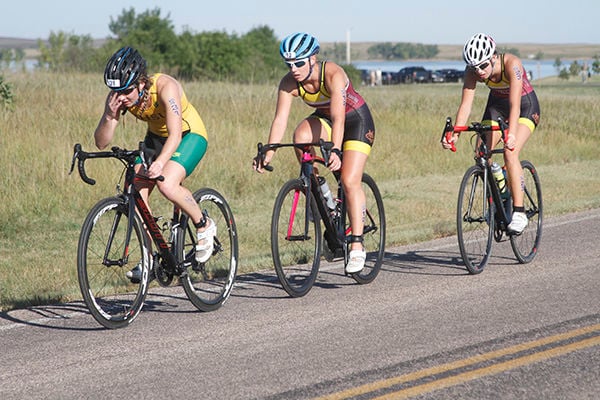 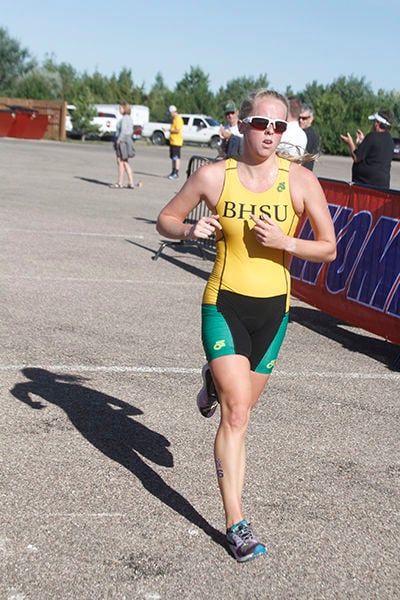 Triathlon combines the sports of swimming, bicycling, and running. The object is to finish the course in as little time as possible.

“It was an unusual season,” Feist said. The team did not have access to the Young Center swimming pool for about a month because of mechanical issues.

“Deadwood was very accommodating,” Feist said. “It was really nice, actually, for us to be able to get over into another community and have them see our triathlon team in training.”

Athleticism and returning experience served as the Yellow Jackets’ strong suits when the season began. “The veteran student-athletes on the team really took our new freshmen under their wing and helped them adapt to our training philosophy and training program really well,” Feist said.

The Yellow Jackets did not sustain any major injuries this season. Feist said the team enjoyed a really strong bond.

Black Hills State placed a lot of emphasis on swimming this season. Feist said some other opponents come from areas with really strong varsity swimming programs.

“We’re a very run-centric team,” Feist said. “We have very strong running athletes, but swimming was our biggest challenge.”

“That was very time-consuming but worth every minute of it,” Feist said. Planning began one year in advance, and Feist said other teams were very impressed with the effort.

Division I Arizona State, which attended the Spearfish qualifier, also hosted the national championships. Feist said an Arizona State parent told her at natioanals the team loved coming to South Dakota and hoped Black Hills State would be able to host another event.

All team members have areas to improve in each of the three disciplines, Feist said.

She added some showed considerable improvement in a certain area, and she is proud of all team members.

Hirschi really stood out in that regard, according to Feist. “She came just really eager to advance her cycling skills and abilities,” Feist said. “She was practicing on some of her skills outside of our workouts, and it really showed.”

Black Hills State will not lose any seniors to graduation. Feist said a strong recruiting class will come in next fall, so the squad will be veteran-led.

The Yellow Jackets have placed in the top three at nationals in each of the last three years. Feist said she has received a lot of contacts about the team and school.

“Our goals always are to develop our athletes to be the best they possibly can be on race day,” Feist said. She added a podium finish at nationals is the cherry on top.