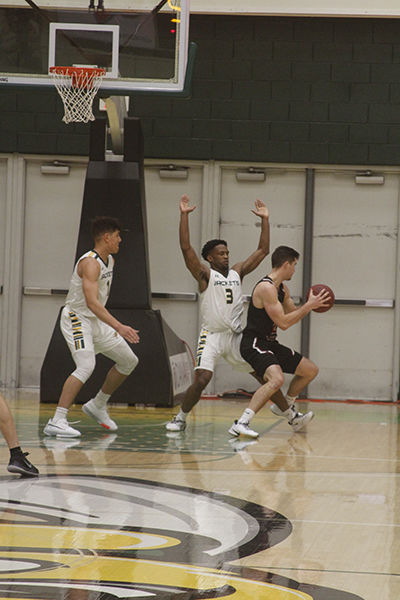 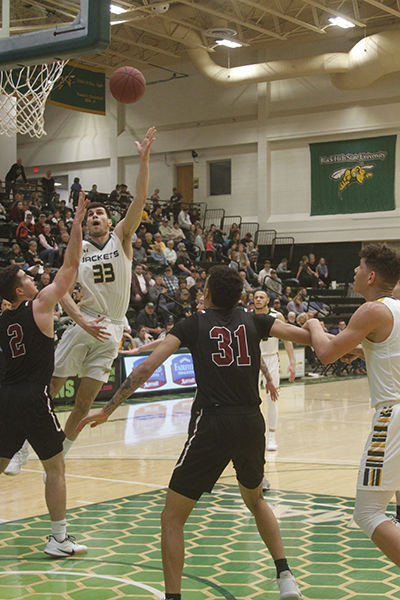 Stefan Desnica of Black Hills State puts up a shot in the lane. Pioneer photo by Jason Gross 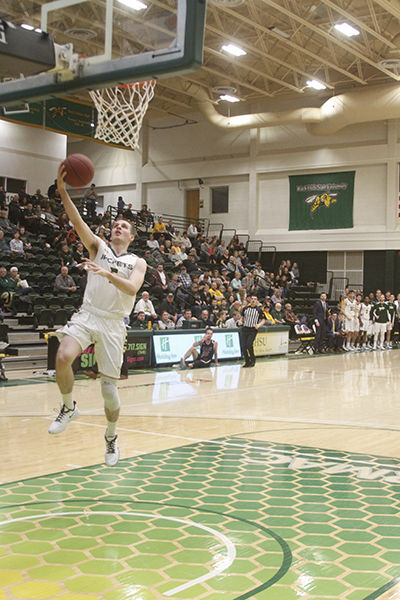 Stefan Desnica of Black Hills State puts up a shot in the lane. Pioneer photo by Jason Gross

“I thought as the game wore on, we kind of imposed our will. We had a lot of guys who just showed a lot of heart,” said Yellow Jackets’ head coach Ryan Thompson, whose team claimed a 19-11 scoring edge in the extra session. He added the team did not play a clean game and was off to start.

Oliver converted a layup to keep the Yellow Jackets within 37-36 early in the second half. Kolton Peterson and Nuno connected from 3-point range as Colorado Mesa moved ahead 43-36.

The Yellow Jackets trailed 67-66 with 30 seconds to go. Nuno made one of two free throw attempts 17 seconds later as Colorado Mesa stayed ahead 68-66.

Scott scored from inside with 4.7 seconds left to bring Black Hills State into a 68-68 tie. A last-ditch Mavericks’ shot missed the mark, forcing the five-minute overtime session.

Colorado Mesa sliced the margin to 76-75 on a Michael Skinner 3-point field goal. A 7-0 run capped by Dukic’s 3-point field goal kept the Yellow Jackets ahead 83-75 with 47 seconds left. The Mavericks got no closer than six points the rest of the way.

Black Hills State placed four players in double figures, led by Oliver and his 21 points. Dukic (20 points), Scott (18), and Capley (12) followed. The Yellow Jackets are 5-2 in the conference and 8-5 overall following their fifth straight win.

Thompson said Oliver gave the team a huge defensive boost in the second half, with Scott and Dukic also excelling.

Capley excelled in overtime, according to Thompson. “We don’t do that without him,” Thompson said of the victory.

“He (Capley) did a great job protecting the rim, and it felt like we just went through him,” Thompson added. Capley netted six points during the extra session.