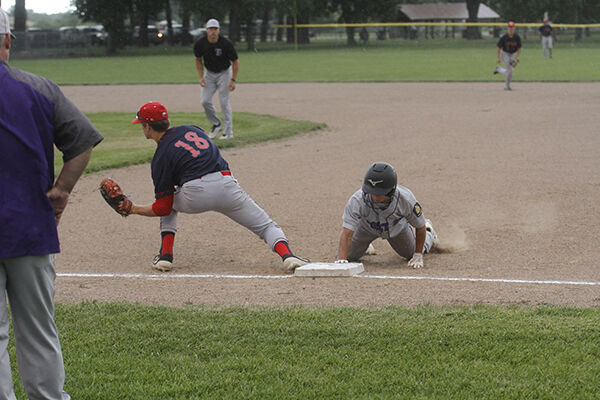 Belle Fourche’s Logan Tyndall dives back to first base during the day’s first game. 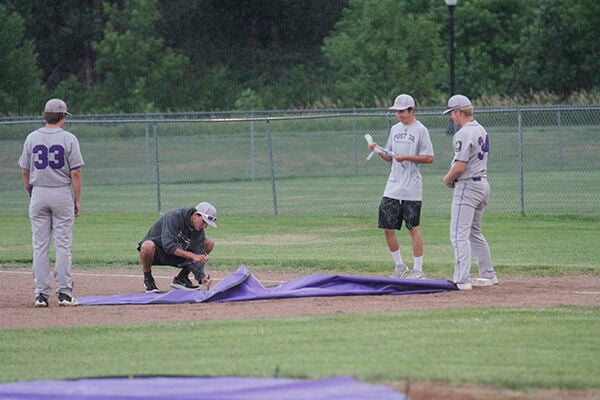 Players work to place a tarp around the first-base area as rains fell.

Belle Fourche’s Logan Tyndall dives back to first base during the day’s first game.

Players work to place a tarp around the first-base area as rains fell.

“We gave them a couple of free bases with some walks, but overall they did a good job of executing with runners in scoring position,” Belle Fourche head coach Randy Doran said of an Outlaws’ squad that scored in six of the game’s innings.

Miles City plated two runs in the first, one in the second, and three in the third for a 6-0 advantage. Single runs in the fourth and fifth frames boosted the margin to 8-0.

The Outlaws used two runs in the seventh for the final 10-0 score.

“We were playing good defense and doing all right hitting until we got runners in scoring position,” Doran said.  “Then, we kind of tensed up a little bit.”

The junior varsity game started the day. Miles City took a 4-0 lead into the bottom of the second frame when the rainfall started at around 6:05 p.m. The rest of that game was cancelled, and the varsity contest began.

When reflecting back on the season, Doran said, the squad constantly improved from start to finish.

He finished his first season as a head baseball coach and said he most enjoyed building relationships with the players and assistant coaches.

Doran said this season served as a tuneup for what is anticipated to be a great 2021 season.