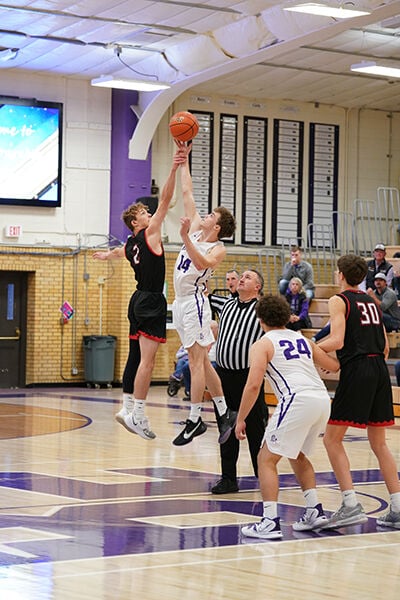 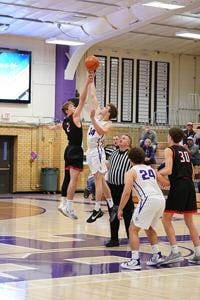 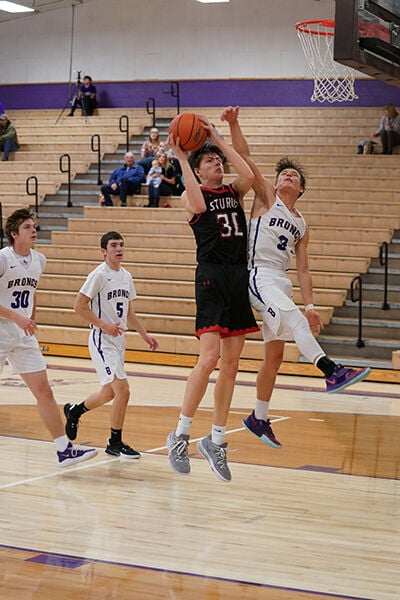 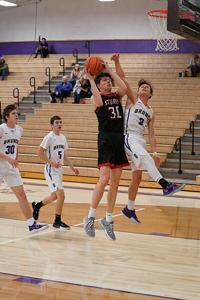 Sturgis’ Jake Vliem, left, goes up for a basket while being defended by Belle Fourche opponent Gage Kracht. Pioneer photo by Tim Potts

Sturgis’ Jake Vliem, left, goes up for a basket while being defended by Belle Fourche opponent Gage Kracht. Pioneer photo by Tim Potts

“I thought we put together a full four quarters, although the second quarter was a little rough, but it wasn’t like our normal quarter lapse that we have been having this season,” Broncs’ head coach Clay Pottorff said. “We have been getting beat by 10 in the quarter and then have to fight back for the rest of the game, and I thought we were more consistent throughout the whole game.”

In the first quarter of play, Belle Fourche jumped out to a nine-point lead, but the Scoopers went on an 8-0 run to pull within one point, 14-13, at the end of the first.

The Scoopers struggled shooting in the second quarter. Gavin Ligtenberg’s layup with 11 seconds left in the half was the only score, making the halftime score 22-15.

The third quarter ended up with the Scoopers outscoring the Broncs by one point.

“We played with a lot of energy and had a lot of guys step up. We are a little depleted with injuries right now, so we had a great next-man-up mentality.,” Pottorff said. “Gabe Heck came infor Sturgis  and played lights out, and he does everything right, and Ryker Audiss stepped up and gave some huge rebounds late in the game.

“Lan Fuhrer also stepped into a leadership role tonight, and Aiden Giffin scoring was big; he posted up and found open spots.”

Sturgis head coach Derris Buus talked about how the Scoopers played and thoughts on the game overall.

“We did not come out with the passion I thought we would today. I thought we would come out and get after them and we just came out sluggish,” said Buus.  “We just did not do the things we needed to do, both offensively and defensively, and missed too many layups.”

Sturgis Brown shot 17 of 50 for 34% for field goals and was one of four on free throws to go with 20 turnovers and 27 rebounds.

The Scoopers’ scoring was led by Tyan Buus with 12 points, followed by Jake Vliem and Owen Cass, both with eight.

“We got indecisive and you still have to play basketball. As a coach, you try to give them the tools to help them learn where to attack and then they have to play,” said Buus.

Leading the scoring for the Broncs was Giffin with 23 points, followed by Gage Kracht with 13.

“Knocking down the free throws is definitely a big part of keeping the lead, and overall I had a good game, along with everyone else on the team. We played well with each other,” said Giffin.

The Scoopers (1-6) travel to Pierre Tuesday to face the Governors.  The Broncs (3-5) will host the Spearfish Spartans Tuesday, in Belle Fourche.