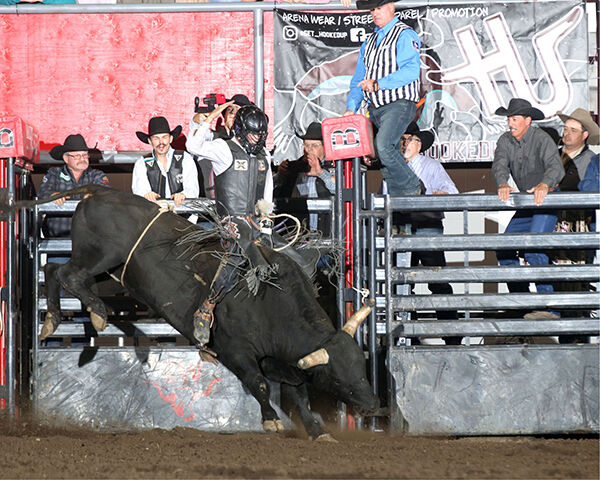 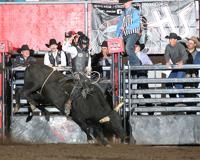 Bull rider Jeff Bertus was one of two qualified rides for the second round of the Badlands Circuit Finals Rodeo and won the round on the Mosbrucker Rodeo bull The Undertaker, with 86 points. Photo by Cowboy Images/Peggy Gander 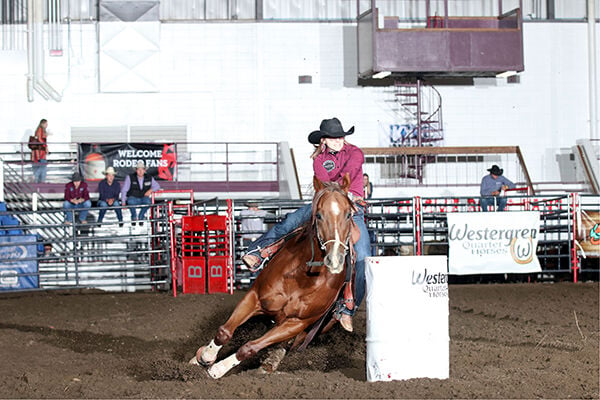 Bull rider Jeff Bertus was one of two qualified rides for the second round of the Badlands Circuit Finals Rodeo and won the round on the Mosbrucker Rodeo bull The Undertaker, with 86 points. Photo by Cowboy Images/Peggy Gander

Jordan Pelton had never won a check in the last four times he’s qualified for the finals, but this year he won first place for each performance, and the average, with 258 points on three head.

In fact, he’s enjoying rodeo more than ever, after a mental “switch.”

“My focus has changed to just riding,” said Pelton. “Rather than focusing on winning, which takes away from your job. It’s been a fun year, dang sure a lot of fun.”

Jamie Howlett, of Rapid City, competed on Sunday after pulling a hamstring during Saturday night’s ride.

In the steer wrestling, Riley Reiss, Manning, N.D., entered the finals in first place and finished in the same spot, even though he didn’t win any money.

“I had a lot of luck this summer,” Reiss said, but his luck ran out at the fairgrounds. “I’ve struggled in this building. I don’t know what it is. This year, I couldn’t capitalize. Next year I’ll be prepared for it.”

The year-end winner was Eli Lord, of Sturgis.

The winning team ropers came north to Minot in first place and never looked back.

Brothers Tucker and Cooper White, Hershey, Neb., had an excellent season, and a finals as well, winning one first place check and two second place checks to also win the average (16.4 seconds on three head).

In the saddle bronc riding, a veteran cowboy won the finals.

Chuck Schmidt, Keldron, tied for first in the first round (83 points) and first place in the second round (81), with an average of 242 points on three head.

Jacob Kammerer, of Philip, was the year-end winner.

For the barrel racers, it came down to a bit more than a half-second in the average between the top three cowgirls: Amanda Welsh, with 40.83 seconds on three runs, Heidi Gunderson, 41.29, and Molly Otto, 41.37.

The year-end title went to Jessica Routier, of Buffalo.

Both tie-down roping titles went to Trey Young, of Dupree.

Out of a field of 12 bull riders, only four men rode two of three bulls, and no one rode all three.

Thunder Boomer, TJ Schmidt, Ardie Maier, and Chance Schott made qualified rides on two bulls, but it was Schott who wrapped up both titles.

Schott qualified for the circuit finals in first place, and also won the finals with 173 points on two head, seven and a half points ahead of the number two man, Maier, of Timber Lake.

The all-around winner, the cowboy competing in more than one event, was Eli Lord, from Sturgis.

The rookie of the year went to Riley Reiss, Manning, N.D.

Badlands champs will go on to compete at the RAM National Circuit Finals Rodeo, to be held in Kissimmee, Florida next spring.

Points from the Badlands Circuit Finals count towards the 2021 National Finals Rodeo.

The winners from each event of the first three go-rounds follow.