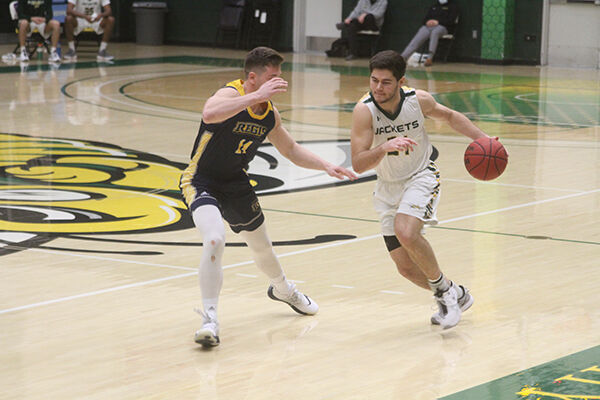 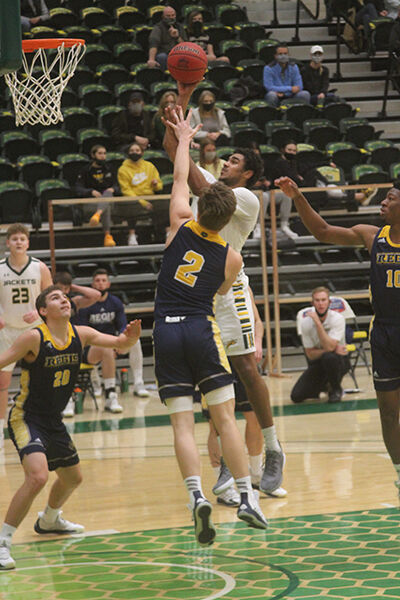 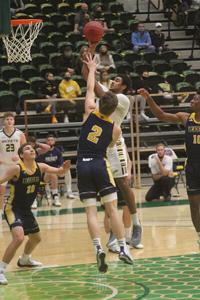 Kevin Senghore-Peterson eyes the basket for two of his 10 points. Pioneer photo by Jason Gross

Kevin Senghore-Peterson eyes the basket for two of his 10 points. Pioneer photo by Jason Gross

“I thought our intensity to start that second half was really good,” said Yellow Jackets’ head coach Ryan Thompson, whose team trailed 37-31 at the break. “That got us out in transition, and we kind of got into a good rhythm from there.”

Black Hills State used an 11-0 run to open the second half, with Trey Whitley collecting the first eight points. Joel Scott completed a three-point play to put the Yellow Jackets ahead 42-37.

Adam Moussa completed a three-point play as Black Hills State opened a 47-38 advantage. The margin reached 10 points (51-41) on a layup by Sindou Cisse.

Regis responded with a 14-4 run. Kevin Ebiriekwe netted two free throws as the Rangers trailed 58-55 with 7 1/2 minutes to go.

Regis received a team-high 17 points from Will Cranston-Lown. The Rangers are 1-2 in the conference, 1-4 overall.

Senghore-Peterson, Cisse, and Moussa were among the players earning Thompson’s praise for their efforts.

Black Hills State (2-1 in the conference, 2-1 overall) is scheduled to host number 4 Colorado Mines today at the Young Center. Tipoff is set for 7:30 p.m.