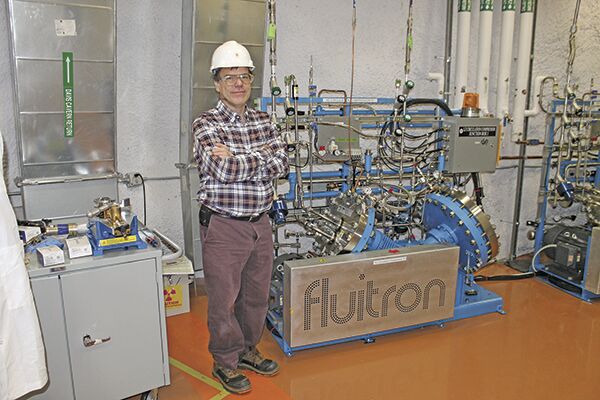 Jeff Cherwinka, LZ’s chief engineer, stands with the filtration system that will circulate the liquid xenon used in the experiment. Pioneer file photo 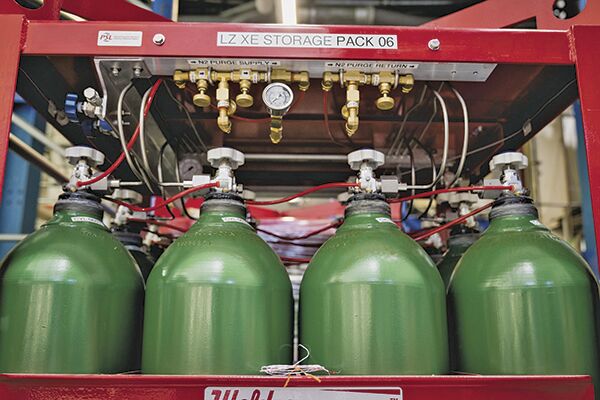 After the xenon is purified, it’s compressed into a gas and put into storage packs built by the University of Wisconsin, Madison. The packs are weighed to see how much xenon is in them. Courtesy photo by Farrin Abbott - SLAC National Accelerator Laboratory

Jeff Cherwinka, LZ’s chief engineer, stands with the filtration system that will circulate the liquid xenon used in the experiment. Pioneer file photo

After the xenon is purified, it’s compressed into a gas and put into storage packs built by the University of Wisconsin, Madison. The packs are weighed to see how much xenon is in them. Courtesy photo by Farrin Abbott - SLAC National Accelerator Laboratory

LEAD — When the Large Underground Xenon (LUX) experiment completed it 300 day run in 2016, it had failed in its mission to prove the existence of dark matter in the universe, but it did prove to the world that xenon might be our best bet at finding the elusive particle.

“So what you can do is keep on running with that experiment for another 50 years, or you build a 50 times bigger one and run with that for a few years,” explained Dr. Markus Horn, a research scientist at Sanford Lab. “So obviously since we all want to be alive when we’re getting our Nobel Prize, we decided to build a bigger one.”

Where LUX used approx. 300kg of liquid xenon to attempt detecting dark matter, LUX-ZEPLIN’s (LZ) tank will hold 10 tons of the super-cooled fluid and be 100 times as sensitive.

In addition to dark matter detection experiments, xenon can also be used in light bulbs, as an insulation gas in microchip manufacturing, and as an anesthetic.

Horn said xenon is a naturally occurring noble gas that makes up approximately 0.005% of the atmosphere. The process of distilling xenon is complicated and requires several rounds of distillation to achieve the desired purity level. Approximately 18 million liters of xenon are distilled each year.

Collecting, distilling, storing, and shipping xenon can be a pricy endeavor. In 2016 When Sanford Lab purchased the 1.5 million liters that will be used for LZ, the price was $5-$6 per liter, and that number has only gone up since then. Horn said the price of xenon is currently around $10-$15 per liter.

Although it’s a large investment, Horn said the xenon used in LZ might actually increase in value as the experiment runs.

“Even if you have a super pure vessel (like the tank which will hold the 10 tons of xenon used in LZ), you’re still outgassing into whatever you put in there,” he said. “We don’t like any contaminants in our xenon we want our xenon to be as pure as possible.”

For LZ the xenon will be cooled to -160 degrees, turning it from a gas to a liquid and increasing its density. As the liquid xenon passes through the filtration and cooling system, it will be continually purified maintaining its quality throughout the course of the experiment.

There are several properties of xenon that make it ideal for dark matter detection. Horn said it is already a very “radio pure” element, which means it doesn’t produce internal backgrounds through radioactive decay like many other elements do. Combined with the cosmic particle shielding from the lab being located nearly a mile underground, xenon becomes a very suitable medium for dark matter detection.

“You have a mile of rock above you, that helps you at shielding everything that comes down from the atmosphere, however the rock itself is a little radioactive and thus has an intrinsic background, so you need to shield (the xenon) from that, hence you build more shielding around your detector on top of that, the xenon itself is so heavy and so dense in its liquid form that it is self-shielding,” Horn explained.

Once as many outside and inside particles have been eliminated as possible, whatever remains interacting with the xenon atoms are likely to be candidates for dark matter.

Another reason xenon’s atomic weight makes it ideal for LZ is its similar mass to theorized models of dark matter itself. Although dark matter has yet to be observed, the gravitational effects of dark matter are seen throughout the galaxy.

Based on what is already known about how particle physics effects gravitational distortion, Horn said scientists are able to establish some parameters for how they think dark matter is built, including its approximate atomic weight.

“The various observations we’re having; we are using to kind of build a model of dark matter. … If you put these parameters in to your model you realize that there’s only a certain range that makes the whole system work,” he said. “So you need them to be a bit heavier and a bit slower to actually confine them within the galaxy.”

Horn said many models for dark matter list it as having an atomic weight somewhere in the range of 50 times the mass of a proton, which would indicate that a particle of dark matter should be roughly the same size as an atom of xenon.

“If you then have two similar size or heavy atoms then the (reaction) works best.”

Another quality xenon has is it produces a visible flash of light when it becomes ionized by another particle.

“We are trying to see this dark matter particle that is hitting a xenon atom and when it’s hitting it, it produces light,” Horn said.

As the life-blood of LZ, Xenon may be the key to detecting dark matter in the universe.

“In the grand scheme of things this is always how you create progress – you’re trying to do something to push the boundaries of your knowledge a bit further,” Horn said. “We physicists kind of do this on a very far away scale, but it still has, eventually, effect on your daily life.”