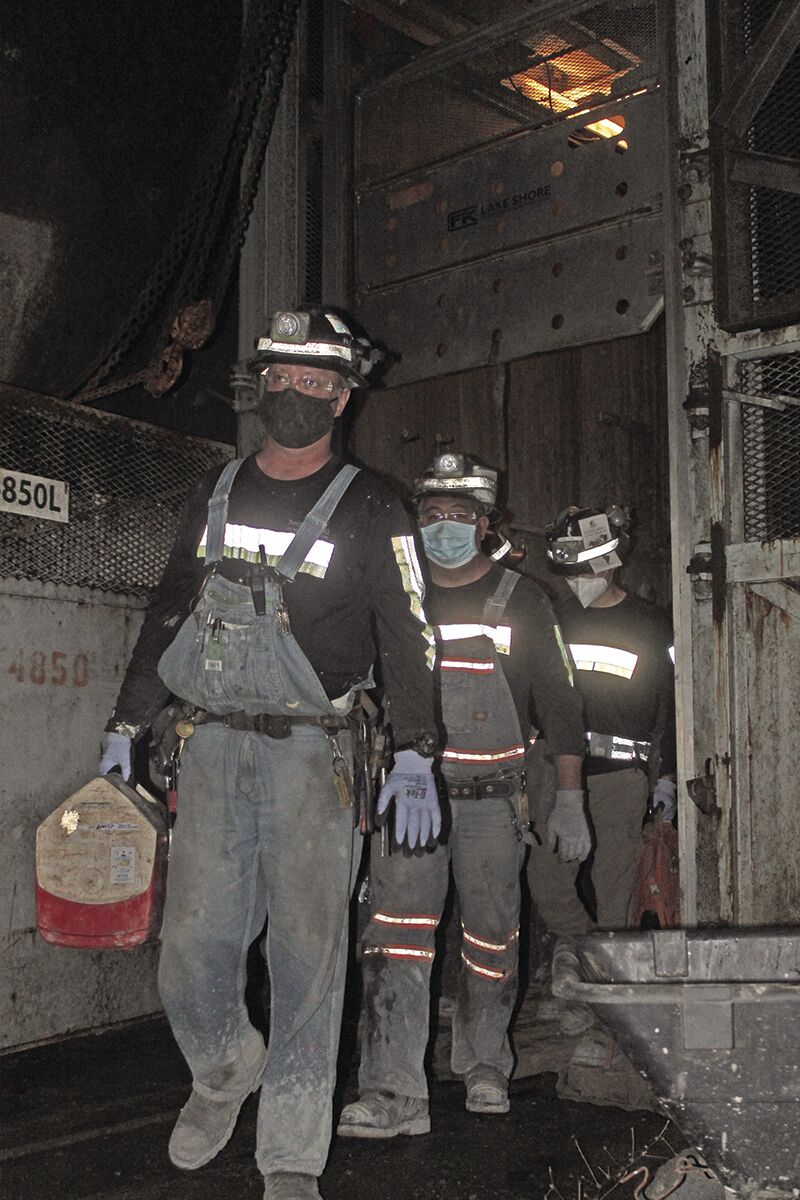 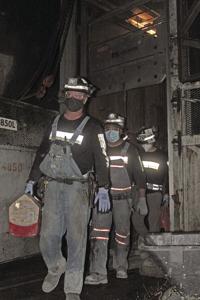 At shift change, workers with Thyssen Mining arrive for their 12-hour day excavating room for what will be the world’s largest Deep Underground Neutrino Experiment (DUNE) when it is completed. Pioneer photo by Alex Portal 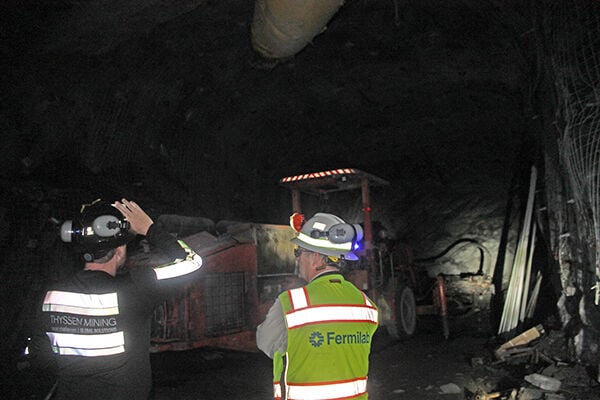 Matthew Scultze, Thyssen Mining chief engineer, left, and James Rickard, resident engineer for Fermilab, inspect a freshly blasted area underground, which will be used as a staging area for the main cavern excavation when it begins this fall. Pioneer photo by Alex Portal 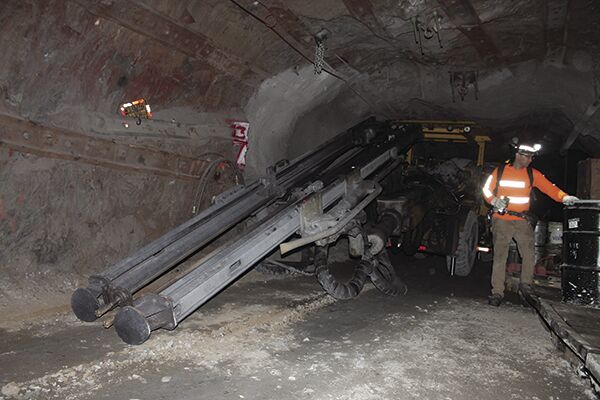 This drilling jumbo is used to drill 10 to 14 foot holes in the solid rock underground for blasting, it’s also used to bore 10 to 12 foot rebar bolts into the rock to secure newly excavated areas. One three times it’s size will be used to secure 20-foot bolts once the main caverns for the experiment are excavated. Pioneer photo by Alex Portal 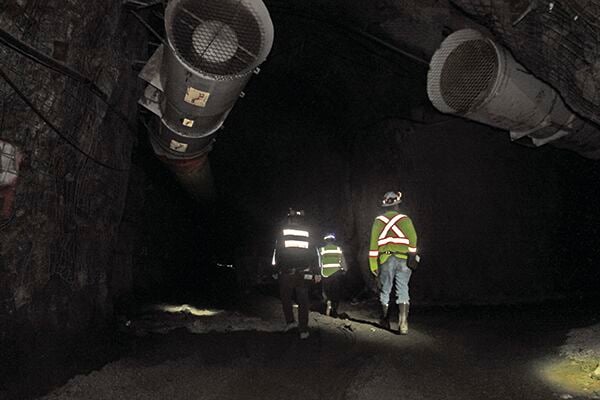 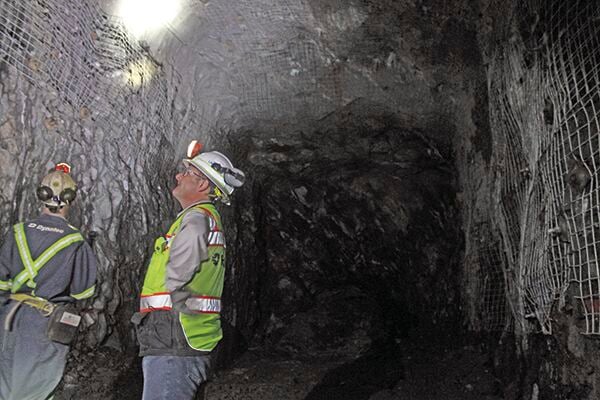 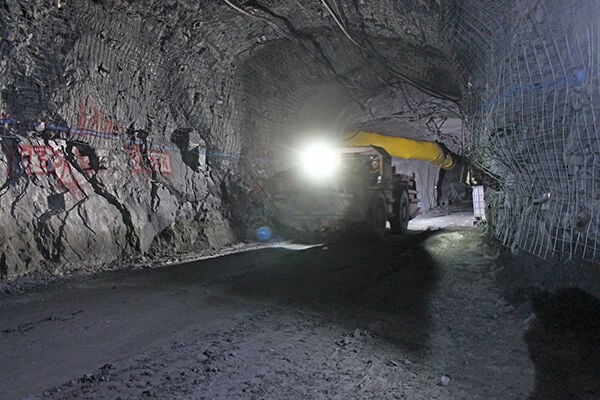 At shift change, workers with Thyssen Mining arrive for their 12-hour day excavating room for what will be the world’s largest Deep Underground Neutrino Experiment (DUNE) when it is completed. Pioneer photo by Alex Portal

Matthew Scultze, Thyssen Mining chief engineer, left, and James Rickard, resident engineer for Fermilab, inspect a freshly blasted area underground, which will be used as a staging area for the main cavern excavation when it begins this fall. Pioneer photo by Alex Portal

This drilling jumbo is used to drill 10 to 14 foot holes in the solid rock underground for blasting, it’s also used to bore 10 to 12 foot rebar bolts into the rock to secure newly excavated areas. One three times it’s size will be used to secure 20-foot bolts once the main caverns for the experiment are excavated. Pioneer photo by Alex Portal

LEAD — Once again the drifts and caverns winding below the surface of Lead that once housed the Homestake Gold Mining Company are bustling with the pitter-patter of miner’s feet as crews from Thyssen Mining prepare the 4,850-foot level of the Sanford Lab for the Deep Underground Neutrino Experiment (DUNE).

“So (there will be) three large caverns, two that (will) house the detectors (will each be) about 65 feet wide, 90 feet tall, and about 500 feet long,” explained Joshua Willhite, design manager for the project with Fermilab. “There’s a cavern between those two that’s called our central utility cavern and that one (will be) still 65 feet wide, it’s only about 35 feet tall, but it’s longer at about 625 feet long. That cavern is primarily to filter and cool the argon.”

When all is said and done, the project will have removed approximately 800,000 tons of rock from the area at the Sanford Lab to make way for the massive detector systems that will receive a concentrated neutrino beam shot underground from Fermilab near Chicago.

Each detector cavern will house two massive detectors at 63 feet wide, 63 feet tall, and 220 feet long. All together, the system will circulate approximately 70,000 tons of liquid argon, cooled to nearly minus 300 degrees fahrenheit. The goal of the experiment will be to study how the neutrinos interact with the argon.

“We plan to start building the first detector in 2024 and expect to turn it on before the end of the decade,” Willhite said.

In the meantime, some very big holes need to be made out of the solid rock surrounding the lab; that’s where the Thyssen Mining Company comes in.

“Thyssen is hitting their stride, they’re doing great, day-in-and-day-out they hit their routine, they’re getting the quality work that needs to be done, they’re doing it safely, and they’re really making good headway,” Willhite said.

The technique used by Thyssen Mining for underground excavation is very similar to the way Homestake blasted its way through the rock, but with different considerations.

“It’s a drill – blast – muck – pull cycle,” added Matthew Scultze, Thyssen Mining chief engineer with the project. “We bring in the (drilling) jumbo, (the machine used to bore holes into a solid rock wall), and drill about a hundred holes, 10 to 14 feet deep depending on where we’re at.”

Explosives are then placed within the holes, with precise charges to control the blast.

“We use an amphotericin emulsion mix for the blasting. We load that with caps; it gets all digitally timed, (and) we blast it,” Schultze said.

Crews then use what’s called a “mucker” to scoop out the debris before bringing a jumbo back into the scene to bore 10-to-12-foot bolts into the new wall and ceiling to stabilize the area, then add heavy weight wire meshing to protect against any loose rocks that may dislodge.

“They’re just a rebar bolt and they go in with a resin and they hold the mesh up and that’s what makes the ground safe and supported,” Schultze said.

Because the blasting is taking place at the 4,850-foot level, the project managers are taking great strides to protect the experiments that are already up and running, from their affects.

“It’s all engineered and designed, we have a blast engineer and there’s a blast pattern that we follow, so it’s very precise,” Schultze said. “We give a minimum of three hours notice and then we have a one hour blast window to blast in and that is to work with the scientists, so that they have an idea of when to expect the blast.”

Additionally, six blast doors have been installed to protect the delicate work being done by scientists at other parts of the 4,850-foot level.

“We’re protecting science,” said James Rickard, resident engineer for the project for Fermilab. “Based on the distance the blast is from the laboratory, is how much explosives we’re allowed to place in one hole.”

“When you blast on the surface, it’s got almost infinite space to expand into, here you’ve got to direct that pulse of energy out where you want it to go and protect what’s here,” Willhite added.

Right now, Schultze said the crews are blasting their way into the mountain at around 10 to 12 feet at a time, but as they move farther away from where the science experiments are taking place, those charges will be increased to clear up to 14 feet in a go.

The bulk of the work being done has been to expand existing drifts and tunnels to make way for the larger equipment needed to create the giant caverns to house the detectors. Rickard said the miners are also creating the “facilities;” staging areas where equipment and supplies can be stored underground for the main excavation of the caverns.

The main caverns will be excavated in the area between the Ross shaft and the Oro Hondo ventilation shaft.

The miners are also creating a raze-bore between the 4,850-foot level and the 3,650-foot level, which will create another ventilation port for the new facility.

A 14-inch diameter hole was drilled down through 1,200-feet of rock separating the levels. Once through, a 14-foot diameter steel reamer, fitted with tungsten carbine cutting heads was attached to the drill at the 4,850-foot level and the hole is being bored from the bottom up.

The two detector caverns will be blasted down around 70 feet below the 4,850-foot level so scientists will have access to the electronics on top. Once blasting is complete, the crew will pour concrete to smooth out the floor of the facility, and use shotcrete to secure areas of the rock ceiling and walls.

“Again, Homestake wasn’t too worried about those types of things, because they had experienced miners that knew what to watch for, they would always inspect as they were going,” Willhite explained. “We have scientists who are focused on science, and a lot of times they’re walking with their heads down because they’re thinking about their science experiment, so we want to make sure that its safe for them, they don’t have top worry about that.”

The shotcrete is applied using a fully automated, remote-controlled machine to ensure none of the miners are put in an unstable area. The shotcrete is lowered down to the 4,850-foot level in pre-mixed dry bags. Water is added, and loaded into the machine. Air pressure blasts the slurry at the walls and ceiling at 300 miles per hour, which actually embeds it into the surface.

Schultze said the largest piece of equipment that will be used underground during the excavation will be a Sandvik512i, which will install 20-foot bolts into the main caverns for support. The massive piece of machinery will be shipped to Lead intact, disassembled and lowered to the 4,850-foot level, and then reassembled underground.

“It’s an enormous bolter, it’s the first (bolter of it’s style) in North America. To give you perspective, that jumbo that’s down there, probably three times that size,” he said. “When you open a big cavernous void like that, the ground wants to come back in, so these bolts stop the ground from coming back in.”

Willhite estimates around 40,000 tons of rock has been excavated since May. Two years of drilling and blasting at their current rate, and then a year of concreting, finishing, and evacuating, along with another year and a half of installing infrastructure for the experiment will be needed before the detectors themselves can be built.

“The year will be pouring concrete and getting all (of Thyssen’s) stuff out. It took a lot of effort to get the stuff down; you’ve got to get it back up again. And then we’ve got about a year and a half after that to put in all the lights, power, and all the general use utilities, and then the detectors can start building, so it’s going to be a long project,” he said.