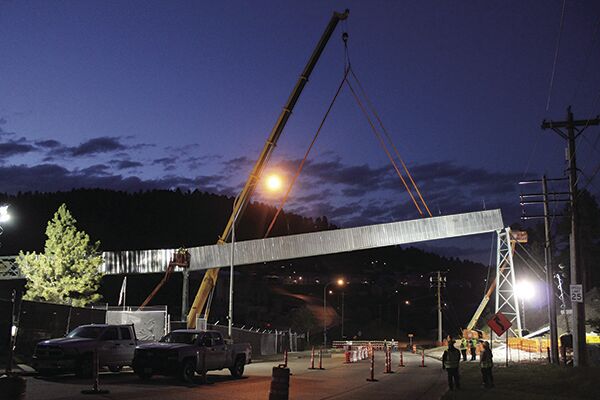 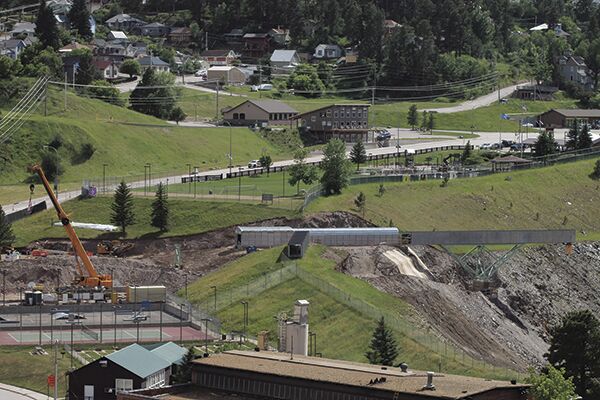 The access tunnel cutting through the berm that separates Manuel Brothers Park from the Open Cut. Pioneer photo by Jason Gross 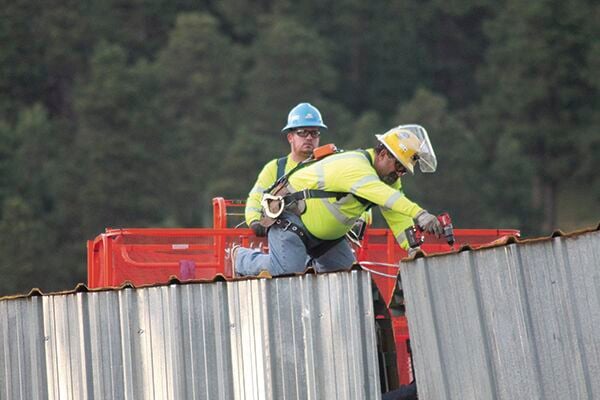 The access tunnel cutting through the berm that separates Manuel Brothers Park from the Open Cut. Pioneer photo by Jason Gross

LEAD — It’s rare that the public gets a glimpse at the work being done below the surface at the Sanford Underground Research Facility (SURF), but one vital component to the Long Baseline Neutrino Facility/Deep Underground Neutrino Experiment (LBNF/DUNE) has become a familiar sight to citizens and visitors to Lead – the conveyor system running across U.S. Highway 85, leading to the Open Cut.

“It’s pretty neat to kind of feel the vibe of the community, especially those that were here when there was a conveyor downhill a little bit that crossed the highway,” said Joshua Willhite, design manager for the LBNF project. “Every bit of feedback I’ve heard so far has been positive about, ‘its nice to see that being brought back in, and see that progress.’”

Since late 2019, work has been underway on the conveyor system, which will carry more than 800,000 tons of rock excavated from the site of the experiment 4,850-feet below the surface, to the Open Cut. A major milestone for the project was met Monday night as the 120-foot section of the truss, which will house the conveyor, was erected above the highway.

“That is probably the most visible, the most significant milestone that we’ll have, that people will see,” Willhite said.

All together, the conveyor system will run approximately 3,700 feet from the rock crusher near the Ross Shaft to the Open Cut where the excavated rock will be deposited. Most of that system will run along the ground and be covered with a roof, but around 614 feet of that system will be raised and extend across the highway. That stretch will be completely contained within the truss that is currently being erected and will also house a walkway for workers to perform maintenance on the conveyor belt as needed.

Earlier this spring, an access structure was built into the berm, which separates Manuel Brothers Park from the Open Cut and the truss has been added, section-by-section making its way south across the highway and up towards the old Homestake tramway, which will be converted into the conveyor system.

“Over the course of the next month you’ll see it go up the hill and then it’s basically not really visible to the rest of the public,” Willhite said.

While crews from Kiewit/Alberici Joint Venture (KAJV) have been working on the conveyor system, underground crews have been working to restore the excavated rock handling system left over from the Homestake days.

“We’re working on systems, in some cases, that are 80 plus years old,” Willhite explained. “And a lot of it was not left in the best condition because the mine shut down and there was really no reason for them to try to keep it in good condition.”

Willhite said crews have had to empty and reinforce the ore pass that runs between the 4,850-foot level and the Ross Shaft, where the major excavation will take place.

“We have actually started some excavation underground,” Willhite said.

A ventilation shaft connecting the 4,850-foot level and the 3,650-foot level will need to be excavated to clear the air underground when the major excavation starts for LBNF/DUNE. Willhite said for nearly a month, crews have been blasting underground to make room for the equipment needed to drill that shaft.

“We’ve started excavating out the chamber that the machine that will actually drill that shaft will sit in,” he said.

Crews are replacing the skip loading system that will carry the rock to the surface to be crushed.

“At the surface we’re replacing the crushing system with the crusher and getting that all restored into operation,” he said.

The Ross head frame itself has had to be renovated as well.

“Despite being standing for all the years its been standing, it does not meet the current load standards, so we did add some structural reinforcement to that,” Willhite said. “It’s all kind of hidden from the public, but a lot is going on.”

Willhite said the conveyor system should be operational by the beginning of 2021, and excavation of the Long Baseline Neutrino Facility is scheduled to start in spring 2021; that portion of the project will take place over several years before the infrastructure of the cavern is ready to begin building the neutrino detectors.

Despite the occasional and to-be-expected odd curveballs, and a four –week shut down due to COVID-19, Willhite said the progress being made on the conveyor system has been an impressive accomplishment for the Kiewit/Alberici team.

“They really care about the people that work for them and the people in the community,” he said.