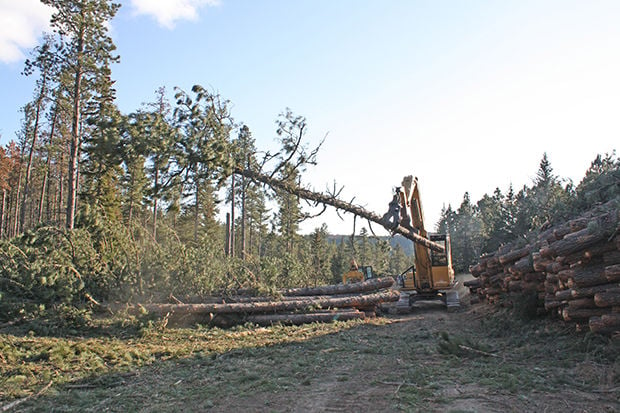 The Black Hills National Forest is rich in the raw materials for lumber and wood products of all kinds, and management of those resources is one of the most important responsibilities of the Forest Service. Pioneer file photo 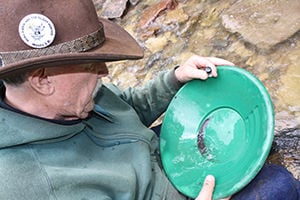 The extraction of minerals is a big business in the Black Hills National Forest. It is also a productive pastime for some. Pioneer file photo 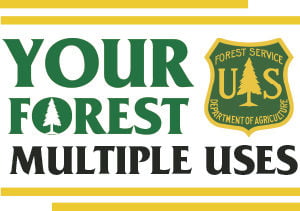 The Black Hills National Forest is rich in the raw materials for lumber and wood products of all kinds, and management of those resources is one of the most important responsibilities of the Forest Service. Pioneer file photo

The extraction of minerals is a big business in the Black Hills National Forest. It is also a productive pastime for some. Pioneer file photo

SPEARFISH — When the Forest Service was created more than a century ago, the stated purpose of the new organization was “To sustain the health, diversity, and productivity of the Nation’s forests and grasslands to meet the needs of present and future generations.”

And timber management is still the main thrust of what the Forest Service does.

“Timber is the biggest program in terms of the amount of employees that we have and the budget we approve,” said Dave Mertz, natural resource staff officer with the Black Hills National Forest.

In Fiscal 2016, the Black Hills National Forest received $2,786,400 from the sale of approximately 100 million board feet of timber harvested on the 1.25 million acres of land that make up the Black Hills National Forest. That harvest is conducted mainly by the private timber industry, which consists of logging contractors and crews that perform the harvest, and the lumber companies that bid on the timber units, buy the timber, and process it. Those operations are monitored and inspected by the Forest Service.

As it turns out, the timber harvest is vital to maintaining the health of the forest. It’s been demonstrated over the past 20 years that one of the causes of the mountain pine beetle infestation was crowded and overgrown timber stands in the western forests.

“It’s pretty well settled that thinning these trees can have a big impact on how successful the mountain pine beetle is,” said Mertz. “If you can get the stands opened up enough, you can cut back on beetle activity.”

“Pine beetles are a direct result of overstocked stands,” said Paul Pierson, a resource forester at the Spearfish office of Neiman Enterprises, one of the largest lumber mill operators and timber purchasers in the Black Hills area.

Ironically, it was the pine beetle infestation that alerted many timber managers in the Forest Service, and even many forestry experts in the environmental movement, to the growing need for more help from the timber industry.

“We are tied so tightly to the health of this forest,” said Pierson.

To accomplish the task of maintaining forest health, the Forest Service enlisted private industry. It couldn’t pay for the cost of programs to thin huge sections of the forest on its own.

“A vibrant timber industry is vital to pay for them,” said Pierson.

“Paying to get that work done would cost us millions of dollars,” said Mertz.

And so, a new alliance developed between the Forest Service and the timber industry. When the battle began about twenty years ago, public opinion had been trending against increased timber harvesting. But the pine beetle emergency served as a compelling argument for more timber sales.

The sale of timber usually begins with an assessment by Forest Service officials as to which areas in the forest need to be thinned.

Usually a forester goes out and identifies those areas.

He defines the timber sale project boundaries, and within those boundaries are timber sale units. The Forest Service staff will “cruise,” or survey the units to estimate volume, said Mertz.

Clients, such as the lumber mills, send representatives to look over the units, and then submit sealed bids for the packages. The clients are required to come up with a bond to insure they have the means to complete the contract.

“Each sale is assigned to one of our timber sale administrators,” said Mertz.

It’s the job of the administrators to make sure the timber is harvested according to the terms of the contract. Part of the contract is the creation and maintenance of access roads in and out of the cutting areas. It’s usually the job of the client to take care of the roads, under the supervision of the Forest Service administrator, said Mertz. There are more than 5,000 miles of roads that already exist in the Black Hills National Forest, and many of those roads can usually be rehabilitated and re-used for timber unit access.

“Our own engineering folks specify the type of road work that needs to be done,” said Mertz.

For the timber industry, the Black Hills National Forest is an indispensible part of their activity. For Neiman Enterprises, a dominant portion of their business relies on it.

“Eighty percent of our volume comes from the Black Hills,” said Pierson.

Neiman usually prefers trees of nine inches in diameter or greater to make the most efficient use of its equipment and procedures.

To bring in the timber, Neiman hires sub-contactors to do the cutting and hauling. The company usually works with a pool of up to 30 logging contractors who operate in the Black Hills.

The timber cutting season in the Black Hills usually runs from May to March. Logging activities are usually shut down during April, and sometimes during the weeks before and after, because of the muddy conditions.

Only about 10 percent of loggers and sawyers nowadays are hand cutters, said Pearson. They usually work in crews of five or six individuals.

Most of the current timber cutting is highly mechanized. Large machines mounted on crawler tracks cut the trees and strip them of their branches. The slash is put into piles and burned later by the Forest Service. The cost of burning the slash piles is paid for with funds from the timber sales. The cut and de-limbed logs are then stacked either on piles or on transport trucks. The logging contractors are usually paid by the ton, and the logging trucks are weighed at the sawmill to verify their loads.

Neiman produces one-inch lumber of various widths, pellets for wood stoves, tongue and groove paneling, bark for mulch, and chips and shavings for livestock bedding. It’s also a supplier of wood frames to manufacturers such as Pella Windows and Doors.

The conduct of timber cutting in the Black Hills is a very efficient use of resources, said Pierson. “The locals seem to support the multiple-use forest. We appreciate that.”

And Pierson said he appreciates the relationship with the Forest Service.

“Our relationship has been excellent for the last couple of years. We all work together very well. It benefits everybody,” he said.

The BLM handles most minerals below the surface, said Karl Emanuel, the north zone geologist with the Forest Service. The Forest Service is involved only as it applies to surface activities, he said.

The Black Hills area is very rich in mineral resources including gold, but most of those gold-bearing properties went into private hands long ago.

Along with gold, lithium and beryllium are found in the Black Hills along with some rare Earth resources such as lanthanum and cerium, which are used in electronics and battery manufacturing.

But once again, most of the management of those resources is ultimately out of the purview of the Forest Service.

The BLM manages the oversight of most placer operations that involve the mining of gravel deposits in streams, as well as the larger mining pursuits that require large amounts of capital.

In those cases, sampling and drilling are required, along with permitting and bonding. There are a half-dozen placer operations still going in the Hills, said Emanuel.

But it’s not as extensive as it once was in the glory days of the gold rush.

Panning for gold usually doesn’t require any permits or paperwork until gold is found and claims are made. But, anyone planning a mineral search operation that will cause a significant disturbance to the surface environment must file a notice of intent with the Forest Service. If minerals are found, claims must be filed with the Bureau of Land Management.

Jim Van Hout, the president of the Northern Hills Prospector Club, said his organization has many claims in the Black Hills. At least some of the 140 members usually hold an outing once a month to engage in prospecting and panning. And he and his fellow members firmly believe there’s more gold to be found in the Black Hills.

“It’s been estimated that less than 10 percent of all the gold in the world has been found,” he said.

And that would apply to the Black Hills as well, he added.

His organization is a local chapter of the Gold Prospectors Association of America, and Van Hout said he doesn’t consider the organization’s interest in gold prospecting as a hobby.

“Anybody that has to work as hard as a miner does, it’s not a hobby,” said Van Hout.

“You do need to know what type of rock that gold is associated with,” he said

“Quartz is an indicator,” he said.

Most of the gold found nowadays appears in the form of flakes and tiny nuggets. But Van Hout said it is possible to make a living prospecting and panning for gold if one is willing to put in the large amount of work and put up the large investment that it requires. If someone has a desire to look for gold, said Van Hout, the Black Hills is a good place to start the search.

Some of the most active mineral extraction operations in the Black Hills are gravel and stone quarries that supply the construction industries in the area. Much of the Black Hills geology is made up of limestone, which is an important material for road surfacing. Feldspar and porphyry are also found, and quarries have been created throughout the Black Hills to take advantage of those deposits.

Most mining and quarry operations are based on historical sources, said Emanuel, meaning they’ve been known about for a long time and were placed at their present locations during the early years of the settlement of the area.

If new quarry locations are planned, they must go through a bidding process with both the Forest Service and the BLM, bonding must be demonstrated, and plans for eventual reclamation must be submitted. The bid prices are usually based on the market price for gravel and aggregate in the local area.

The extraction activities and industries working in the national forests sometimes are the subject of controversy and criticism, but their defenders say they provide jobs, vital materials, and are absolutely necessary to the survival of local communities. And ecologists in the Forest Service say regular timber harvesting is vital to the health and long-term survival of the woodland ecosystems.

This is the second installment of a three-part series about the multiple uses of the Black Hills National Forest.