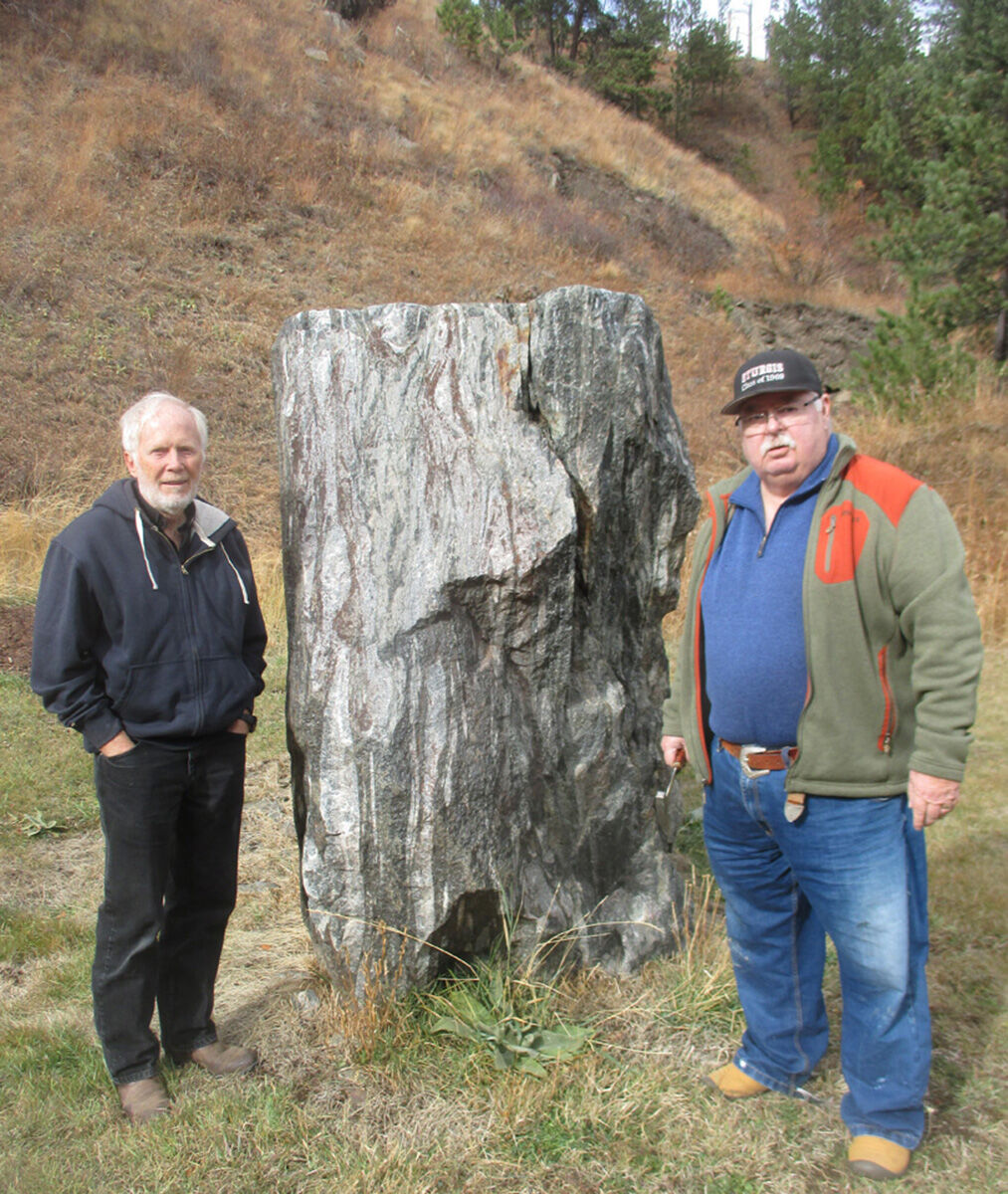 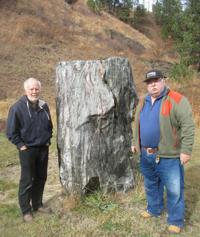 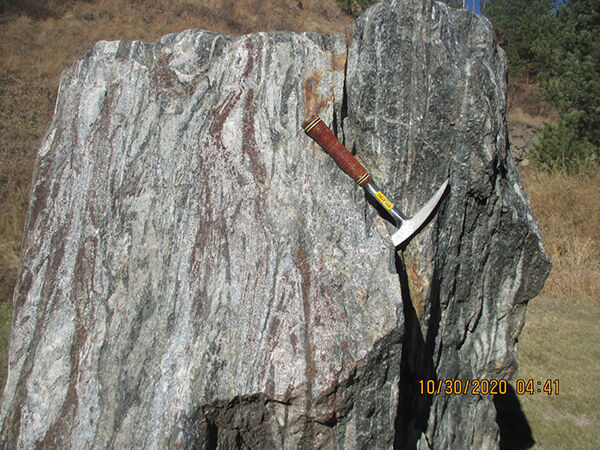 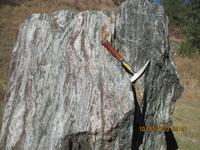 This 19-ton boulder, located near Rochford, is planned to be cut into a new altar for St. Patrick’s Catholic Church in Lead. Courtesy photo

This 19-ton boulder, located near Rochford, is planned to be cut into a new altar for St. Patrick’s Catholic Church in Lead. Courtesy photo

LEAD — Members of St. Patrick’s Catholic Church in Lead want to make a piece of the Black Hills into an altar.

Parish members Bruce DeMarcus and Lyle Steffen began exploring options for a new altar, after Father Leo Hausmann suggested that the altar should be made from stone, like those of the Old Testament in the Bible. It would be even better, he said, if the altar was made from local rock, to establish a deeper connection with the people.

“Father thought if we got a local rock, like from the Homestake Mine, the parish community might see that as a pretty viable option,” said Steffen. However, he explained that procuring a rock from the mine wasn’t easy. After two years of waiting Steffen, a retired geologist, found another option near Rochford.

Steffen and DeMarcus said It was almost as though it had popped out of the nearby rock formation to become the new altar at St. Patrick’s Church. After obtaining the necessary land permissions and easements to procure the rock, church officials recently began the lengthy process of running tests to determine whether it can be cut into an altar and a baptismal font.

But since the rock is a 19-ton boulder in the middle of the Black Hills, Steffen and DeMarcus said all of the testing has to be done with rock samples in a lab. The church is working with Jake Hladysz, who is pursuing a mining engineering degree from the S.D. School of Mines and Technology, and who works with engineering consulting firm RESPEC, Inc. Recently Hladysz took a sample of the boulder back to his lab in Rapid City to analyze the structural integrity of the rock.

“Primarily he’ll squeeze it and actually break it to determine what kind of strength it has,” DeMarcus said. “It may just fall apart by itself after cutting it.”

According to local geologists and Steffen’s research, the boulder comes from the Precambrian geologic time period, and is estimated to be about 1.88 billion years old. Though further studies on its origin have been difficult due to the unavailability of Precambrian rock to study, Steffen said it’s possible that the rock could have come from as far away as Africa, and morphed into the Black Hills when plate tectonics shifted plates in the earth to their present locations and compressional forces from west to east caused an uplift around 70 million years ago.

“The only place we see Precambrian rocks on the surface of the earth are in locations that have undergone recent uplift,” Steffen said. “The Precambrian rocks within the (Homestake) Mine and the area around Lead and Deadwood developed originally on the floor of ancient seas and subsequently were complexly deformed and metamorphosed in the roots of ancient mountain chains far older and larger than the present day Black Hills. Geologists do not have enough exposures of these ‘basement’ rocks to determine where they were located on the earth at the time of their deposition. There aren’t that many outcrops of Precambrian rocks. The only time we see basement rocks is when you have an orogeny or uplift, like when the Rocky Mountains and the Black Hills were formed. Forces in the earth were compressing west to east with plate tectonics, and the Rocky Mountains were uplifted. The Black Hills are the eastern most extension of that uplift, and that’s why we see Precambrian core in the Black Hills. Otherwise, it’s buried tens of thousands of feet under all of those younger rocks, and you can’t see them, so you can’t study them and you can’t make correlations. We can get samples, and we can do age dating, and we can look at which layers are on top versus which layers are on bottom. But these basement rocks have been so intensely folded and re-folded that they are completely upside down a lot of times. It’s very complex geology to study Precambrian rocks. We don’t have enough outcrops to look at them around the world to say exactly how they were formed and where they were formed.”

“The Precambrian stuff is really ancient,” he continued. “The earth’s core is made of iron, nickel and manganese. Then we get into the mantle, which is underneath all of the solid stuff, where we get our mineral deposits, oil and gas. Under the solid stuff is molten. If you’ve ever watched a pot boil, you see the water bubble up to the surface and then it goes down the sides. It gets hot again, comes up and loses its heat and then starts subsiding. So, it has this circular pattern. Well, that’s going on in the mantle of the earth. That’s what drives continental drift. The rocks on top are broken up into different plates. That’s all ancient history and our rock is part of that.”

The St. Patrick’s church boulder is located in the Rochford Formation, a banded iron formation with a maximum age of 1.88 billion years.

Steffen explained that scientists determined the age of the Precambrian rock by examining radioactive isotope decay within the rock.

“Radioactive isotopes decay within a certain length of time,” he said. “Depending on how much of the original isotope there is versus the decayed products, that’s how the geologists measure geologic time. They get within a few million years.”

With such a long and complicated geologic history, Steffen and DeMarcus said they are excited about the prospect of moving the boulder into the church as the centerpiece for consecration during the Mass. But before they get that far, they anxiously await the results from Hladysz studies at S.D. School of Mines and Technology.

“He’s no longer Catholic. But his mother is. When she found out about this she started saying the Rosary and she hasn’t stopped,” DeMarcus said with a chuckle.

In addition to determining the structural integrity of the rock, DeMarcus said the church is looking for ways to get it cut into an altar and baptismal font. Church officials are currently working with West River Monument in Rapid City and Dakota Granite in Milbank, S.D., to determine whether they can create the masterpiece of an altar that the church needs. But even before it makes it to the stone cutters, there are even more logistics to consider.

“This thing weighs 18 to 19 tons,” DeMarcus said. “We’re going to have to load it up on a semi-truck, and we don’t want to break it when we load it. I’ve been thinking about getting some old mattresses to lay down in the truck and gently roll it on there. Then, even to haul it down there it could slide on one of those fissures.”

Overall, DeMarcus and Steffen said because of the many studies that have to be completed before church officials can even move the rock, it’s difficult to determine a timeline for the possible altar. But, if all goes well, they hope to have some activity within the church by next fall.

Funding to study and transform the boulder into what church parish hopes will become their new altar comes from the Living the Mission campaign, conducted by the Diocese of Rapid City. During the campaign, the diocese issued a challenge to local churches to raise funds to a certain threshold. St. Patrick’s church met that challenge, and were given $58,825 to spend on improving the church sanctuary and altar.

“We thought it was kind of neat to procure something local, and to use local business,” DeMarcus said. “Maybe there will even be some gold in it!”