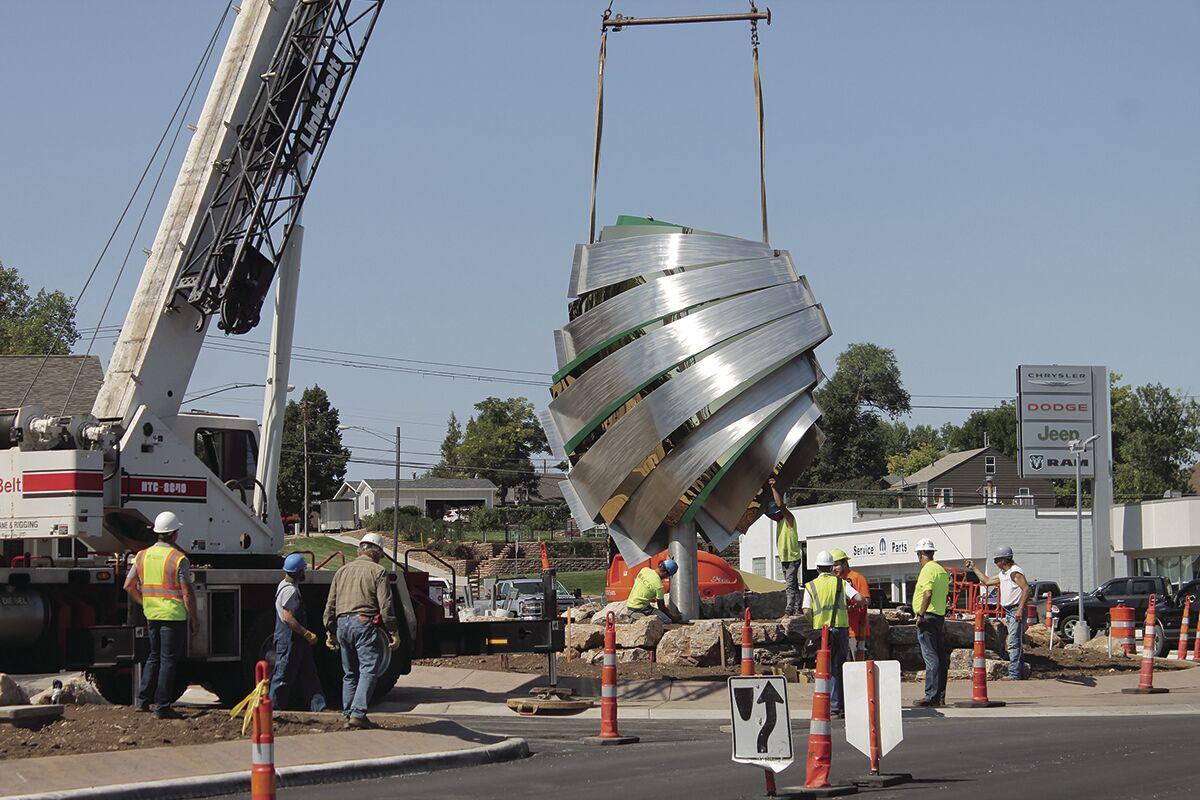 Local artist Dale Lamphere supervised the placement of his latest creation, “The Hive” in the center of the Jackson Boulevard roundabout Tuesday. 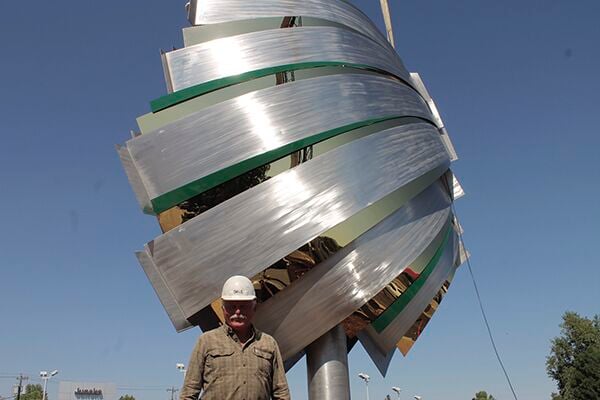 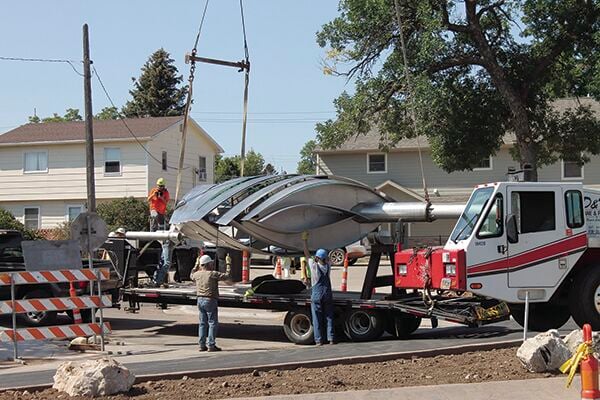 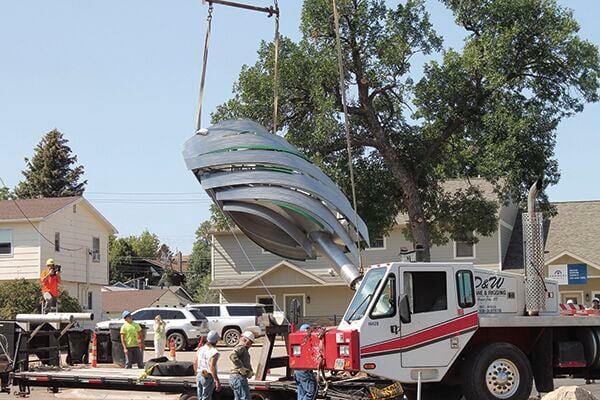 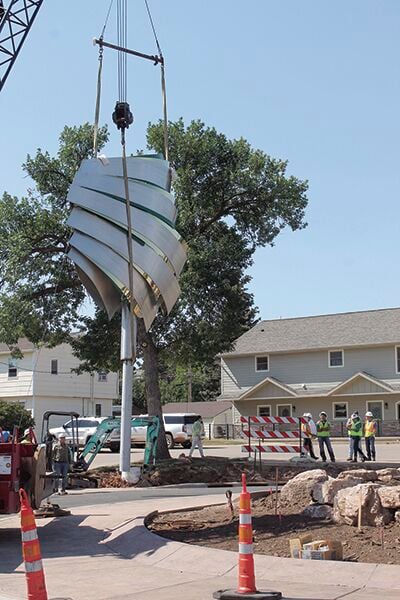 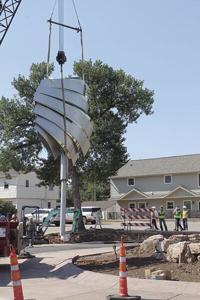 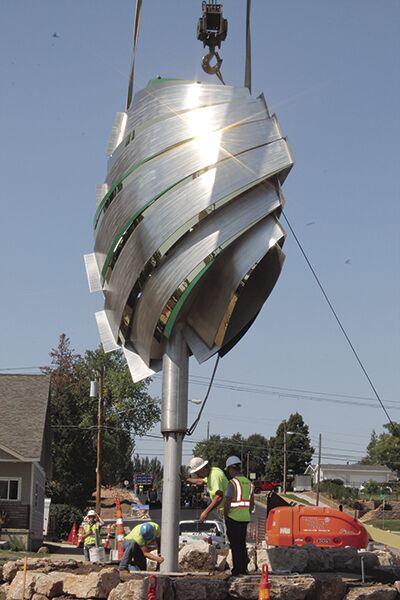 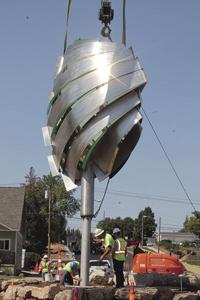 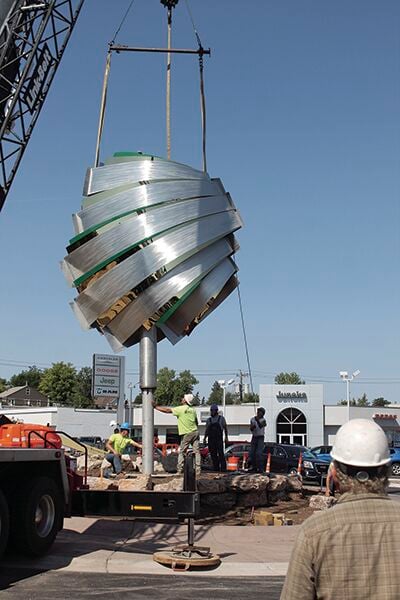 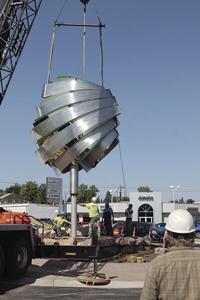 Local artist Dale Lamphere supervised the placement of his latest creation, “The Hive” in the center of the Jackson Boulevard roundabout Tuesday.

“I feel real fortunate because I always get to put the frosting on the cake,” said Dale Lamphere, a local artist, who was contracted by Black Hills State University to create “The Hive,” an art installation, which brings the motif of the university front and center to the downtown district.

Lamphere said “The Hive” was designed to be an abstract representation of an actual yellow jacket hive, while remaining a vibrant piece of accessible art for the community at large.

“I did study hives and understood the overlapping planes and the sort of linear texture that they have, so all of that is reflected in this piece,” he said. “I like to use contemporary materials and design, and “The Hive” provided a lot of opportunities to make an abstract form that had meaning to it.”

Initial meetings and design of the sculpture began a year and a half ago. Lamphere employs one other full-time assistant, and contracts with other local artists as needed for his large-scale projects. All together, he said, five artists worked on the piece; construction took around eight months.

“I have a real excellent wielder that I work with full-time, Andy Roltgen, and I sure don’t mind him getting a lot of credit because those things would be difficult to do without his level of expertise,” he said.

“The Hive” stands at around 20 feet tall, weighing in at just over 3.5 tons, and is constructed entirely out of stainless steel.

“I was real excited by the dramatic contrasts of the materials and the scale of it, and the fact that it’s in a roundabout where it’s seen from all angles; that’s both interesting and a challenge,” Lamphere said with a laugh.

Special considerations were made to help mitigate the highly reflective surface of the stainless steel used. The bare slats have been textured slightly to cut down on sheen, and the green slats were coated using car-painting techniques.

“The gold is a coating called titanium nitride, and it was invented in World War II to coat optical equipment to keep it from being scratched in field conditions. So it’s a real tough finish,” Lamphere explained. “The sculpture is elevated enough to where headlights shouldn’t be a problem. And most of the gold is angled upward a bit and that was consciously done so that we wouldn’t be as prone to catch headlights.”

Lamphere said he’s proud to finally have a large-scale outdoor piece in the Black Hills, and he could think of nowhere better to construct his hive than Spearfish.

“I really enjoyed working with Black Hills State University and their staff on this, and I appreciate the opportunity to have a large-scale work here in Spearfish,” he said. “It’s the home of the Yellow Jackets.”