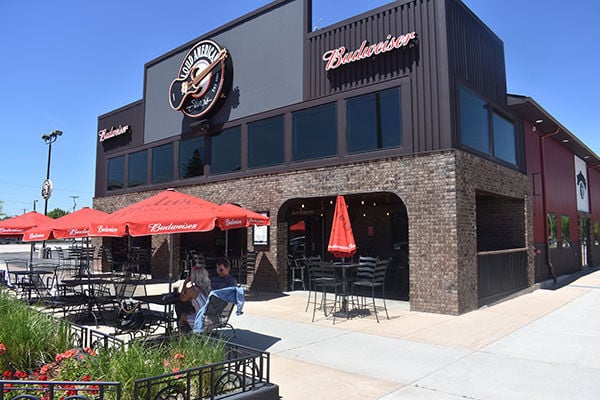 Downtown Sturgis businesses such as the Loud American Roadhouse will see increased Business Improvement District assessment fees under a proposed ordinance before the Sturgis City Council on June 8. Pioneer photo by Deb Holland 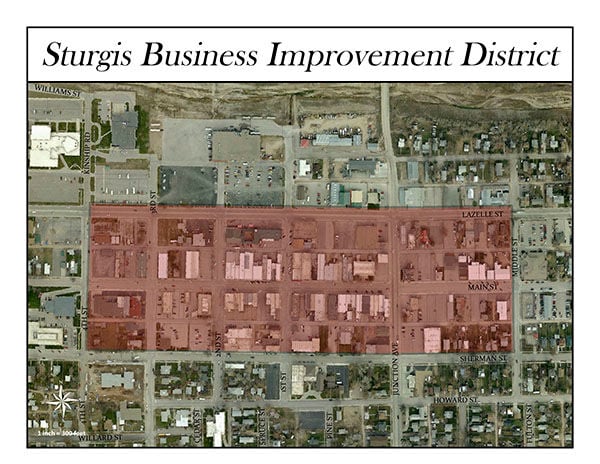 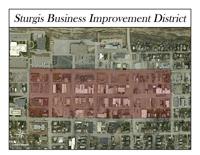 The map shows the boundaries of the Sturgis Downtown BID District. Courtesy photo

Downtown Sturgis businesses such as the Loud American Roadhouse will see increased Business Improvement District assessment fees under a proposed ordinance before the Sturgis City Council on June 8. Pioneer photo by Deb Holland

The map shows the boundaries of the Sturgis Downtown BID District. Courtesy photo

STURGIS — The Sturgis Downtown Business Improvement District is looking to increase the fees it collects from property owners in the downtown area.

The Sturgis City Council at its meeting on May 17, approved first reading of an ordinance that would change the assessments charged downtown property owners. Second reading of the ordinance will be at the council meeting on Monday.

The Sturgis BID was formed after the city council heard recommendations from the Sturgis Area Chamber of Commerce’s Downtown Strategy Task Force in 2013. Numerous ordinances, zoning and facade recommendations were implemented at that time.

One of the more controversial recommendations was the establishment of a $2 per linear foot annual assessment fee. Non-profits, such as the Meade County Senior Citizen’s Center and the Sturgis Motorcycle Museum, do not pay the fee. Residences and churches in the downtown BID area also do not pay the fee. The city does pay the annual fee for Harley-Davidson Rally Point, the Sturgis Liquor store and city hall. The current annual fee is capped at $600 per parcel per year.

In recent years, the money has helped to purchase more than $80,000 in new Christmas lights for downtown Sturgis along with other downtown improvements.

“All of that new lighting was done without taxpayer funds,” Ainslie said. “They have come through BID fees or additional fundraising.”

“Some of the grants have started to dry up, and some of the fundraising opportunities have been a little more challenging,” he said.

In addition to the Christmas lights, the Downtown Foundation has made numerous other improvements including new downtown banners, significant digital advertising for events, funding for the Freedom Statue at Rally Point and funding for the Downtown Art Walk. The assessment has paid for about one-third of these initiatives, Ainslie said. Additional funding has been made through downtown bench sales, fundraising events and grants.

Ainslie said the initial low assessment was set in order to get the initiative to pass. He said it was feared that a larger assessment would not be palatable.

“The intent was that once the Foundation was established and had a strong track record, the assessment would be revisited,” he said.

But in order for the Downtown Foundation to continue in the manner it has, additional, long term funding will be required. The long-term annual budget the foundation believes is necessary to continue in its current capacity is $60,000 per year.

To achieve this funding level, the Foundation is proposing revisiting the assessment level.

It is suggesting making the following amendments:

Remove the existing $600 cap per parcel

Establish a rebate grant program through SEDC for year-round businesses (Open at least nine months of the year) to refund up to 40% of their assessment.

Ainslie said the assessment is similar to what is currently charged in Mitchell ($5 per linear foot). He said several other communities in the state base assessments on assessed valuations.

The Downtown BID Board unanimously recommended making the proposed changes.

Mark Bruch, president of the Downtown Foundation, said businesses have been apprised of the proposed increase. Bruch said he had personally spoken to three business owners and hoped to visit with more.

“The ones that I have talked to understand what’s going on. They are fine with the fee change. I’m sure there are people out there that aren’t going to be fine with it,” he said during discussion of the ordinance at the Sturgis City Council meeting on May 3.

“I think it’s important that somehow this is communicated so that nobody is caught by surprise, and they all know the track we are on right now,” he said.

Bruch, who manages the Loud American Roadhouse in downtown Sturgis, said the BID assessment that business pays annually will nearly double under the new ordinance.

The BID Board understands that it needs more than $23,000 a year to market downtown Sturgis as well as make improvements.

“The board in some discussions felt like something in the $60,000 range, for a town our size, seemed reasonable,” he said.