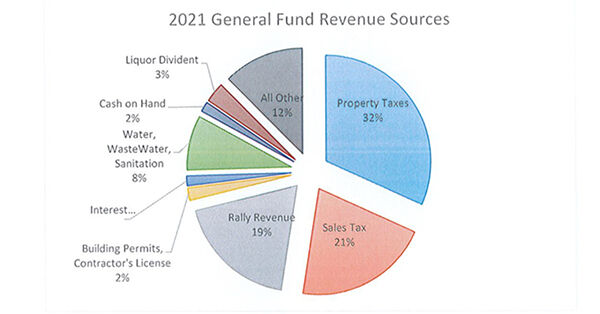 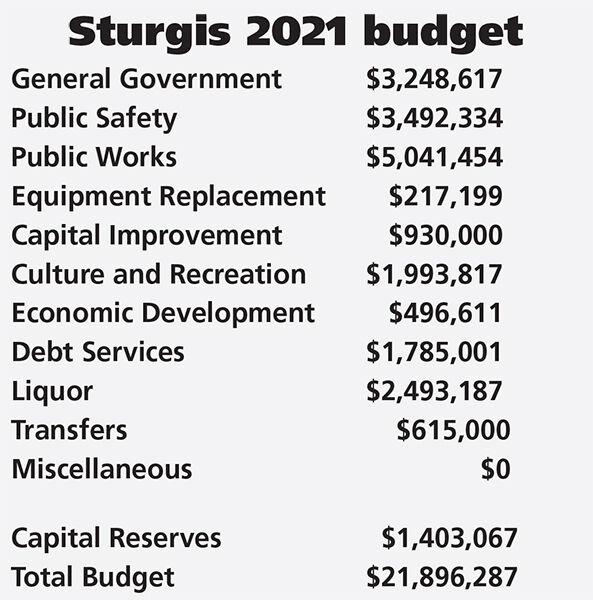 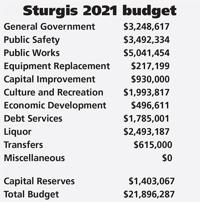 STURGIS — Higher than anticipated sales tax receipts and valuation of properties within the city of Sturgis will translate into a reduction in property taxes of 4.7% for Sturgis residents in 2021.

“In total, by next year, the city will have reduced its property tax rate by 21.5% since 2010,” Sturgis City Manager Daniel Ainslie told the Sturgis City Council.

He said the city’s 2021 budget shows a further reduction in property taxes than first thought in July.

“This is due to continued significant growth in sales tax in 2020 and a higher assessed value than originally anticipated,” he said.

The city had anticipated a total valuation of the city for property tax purposes to be about $475 million. That valuation came in at $485 million — a 2.1% increase.

The Sturgis City Council on Tuesday unanimously approved the second reading of its 2021 budget which totals $21,896,287.

When measured in real dollars (adjusted for inflation) and the city’s population growth, the cost of providing the basic services of the municipality has been reduced by 7.5% from 2010 to 2020, he said.

“The growth of the community, the continued profitability of the annual city of Sturgis Motorcycle Rally and continued gains in efficiency have allowed the city to continually reduce its property tax rate,” Ainslie said.

Even this year, when the city cancelled many of its activities and promotion associated with the 80th Sturgis Motorcycle Rally, the attendance was far higher than anticipated. And preliminary Department of Revenue numbers show spending at the Rally was up this year.

“It is still too early to quantify the net financial impact of the event to the city; a very early estimate is that total net from the event will be approximately $750,000 versus the $1 million anticipated in the budget,” Ainslie said.

Another bright spot in the city’s budget is the revenue coming from the Sturgis Liquor store. As of Aug. 18, the liquor store’s sales were up 19.3 percent over 2019.

Here are some of the projects the city plans to spend money on in the coming year’s budget: