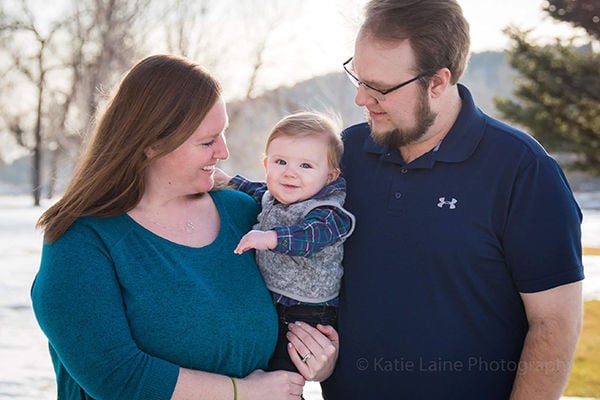 Rainee and Justin Lisko with their son, George. A fundraiser is scheduled Wednesday for George who will have heart surgery in Omaha on Dec. 19. Courtesy photo 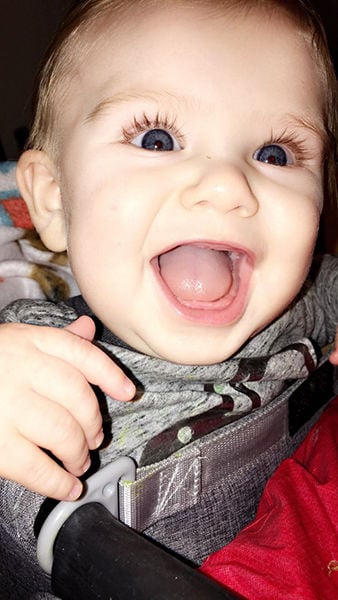 Here is a picture of George Lisko. Courtesy photo

Rainee and Justin Lisko with their son, George. A fundraiser is scheduled Wednesday for George who will have heart surgery in Omaha on Dec. 19. Courtesy photo

Here is a picture of George Lisko. Courtesy photo

STURGIS — Little George Lisko is a curious, strong-willed, smiley 7-month-old cherub who has captured the hearts of an entire community.

“His smile is the first thing everyone notices about him. He lights up any room,” said his mom, Rainee, who worked for years at the Sturgis Area Chamber of Commerce and now serves as an administrative assistant at Whitewood Elementary School.

She said that if you’ve met George then she’s guessing your life is a little brighter.

He’s feisty and funny, loves his blankie and sports a thick head of golden locks much to the envy of his dad, Justin, a Sturgis Brown High School graduate who is manager of Campbell’s Supply in Sturgis.

George was born with a myriad of heart issues. Rainee has shared the family’s journey with George online — even the day George flatlined and they had to revive him.

George was 2 and a half months old when he had his first open heart surgery to insert a shunt at Children’s Hospital and Medical Center in Omaha.

“They said he did better than expected, and there were no complications,” Rainee said.

But then, 23 hours post-op, he went into cardiac arrest.

Rainee was in the hallway when she realized what was happening.

“For a moment I couldn’t move. The chaplain happened to be out there and he held me as I cried. When I got to his room, I saw them performing CPR on George. I prayed like never before. We couldn’t lose our miracle,” she said.

“I’ll never forget the words ‘we have a pulse,’” Rainee said.

Eight days after surgery, George was released from the hospital, and the family headed home. And that is where they have been since.

But now it is time for George to return to Children’s Hospital for a much more involved surgery.

Justin Lisko said he and Rainee are a little nervous and anxious, but ready for the surgery to happen.

He has been diagnosed with levo-transposition (LTGA) of the great arteries of the heart. The primary arteries, the aorta and the pulmonary artery, are transposed.

During surgery they will build conduits along the bottom of George’s heart. Then, they have to switch the conduits on the top. Both are being done so that the blood flows correctly through the heart.

“What’s harming him is TGA or transposition of the great arteries,” Justin said.

Both Justin and Rainee have been amazed at what doctors can do to repair the heart but it is still difficult to hand their baby over to a surgeon.

“When their lives depend on it, it makes it a lot easier,” Rainee said.

The young couple thank all those who have sent messages of encouragement and prayers for them and George.

“We could not do this without our community that’s for sure,” Rainee said.

The Lisko’s church family at LifeSpring Wesleyan has especially taken them under their wing. Church member Crissy Krull, a retired nurse, serves as George’s caregiver.

Because of his condition he can’t go to daycare where he might fall sick being exposed to germs from the other little ones.

“We didn’t know what we were going to do and Crissy just came out of nowhere to come watch him for us,” Rainee said.

Krull said she feels fulfilled and blessed to be George’s caregiver.

“I know that I am helping out this family that is in need, but as much as I am giving, I am getting back 10-fold,” she said.

Krull also has organized a fundraiser for the Liskos and little George from 5 p.m. to 7 p.m. Wednesday, at the Sturgis Armory, 1014 Main St.

“George’s surgery is going to cost a whole lot. The expenses really mount. I want them to not have to worry about finances,” Krull said. “The Lord just laid it on my heart that it would be a wonderful thing to provide a cushion so they can concentrate their efforts on George.”

There will be a spaghetti feed and desserts along with a silent auction.

“You name it, we’ve got it,” Krull said of the silent auction items. “People just want an opportunity to bless others at this time of year.”

Krull had prayer cards made with George’s picture on the front and particulars about the Lisko family and George on the back.

“I’m encouraging people to put that picture on a mirror in their house or on the visor of their car. When they see it, they will remember to pray for Rainee, Justin and George. We just want them to have peace and comfort during this difficult time,” Krull said.

The Liskos will leave for Omaha Sunday. George has scans all day on Dec. 16 to build a 3D model of his heart. The actual surgery will take place on Dec. 19.

“This will give his surgeon a couple days to really study it before he goes in for surgery,” Rainee said. “Please pray for the surgeon and his team, our sanity, and for George of course.”

Justin and Rainee say they feel God made them George’s parents for a reason.

“We’re both really optimistic people and we have pretty strong faith. I think that helps a lot,” Justin said. “Without faith it would be really hard to get through something like this.”

Initially, the Liskos were told that they probably would not conceive without IVF. But they did and figured George was their miracle baby.

“We have learned to soak up every moment with him,” Rainee said.