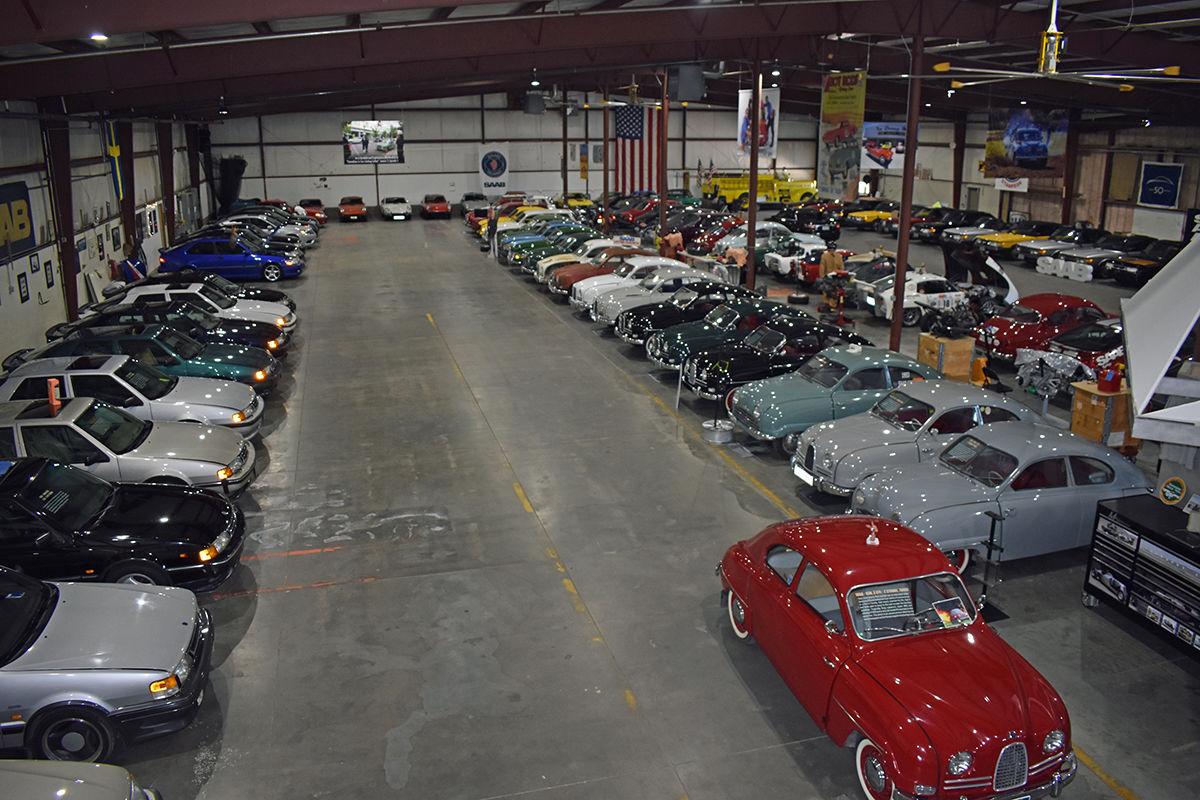 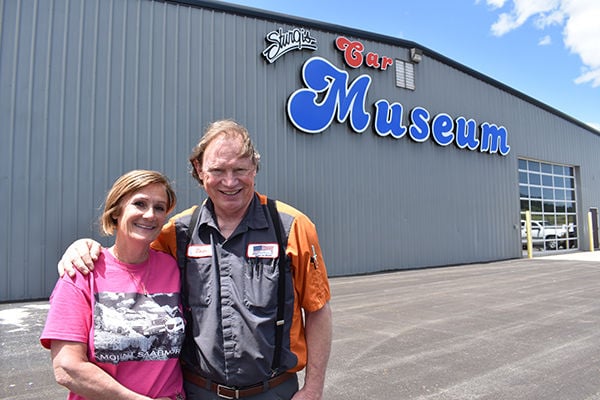 Tom and Patti Donney opened the Sturgis Car Museum last week in Sturgis. The museum is home to the Saab Heritage Museum USA and features more than 100 Saabs. Pioneer photo by Deb Holland 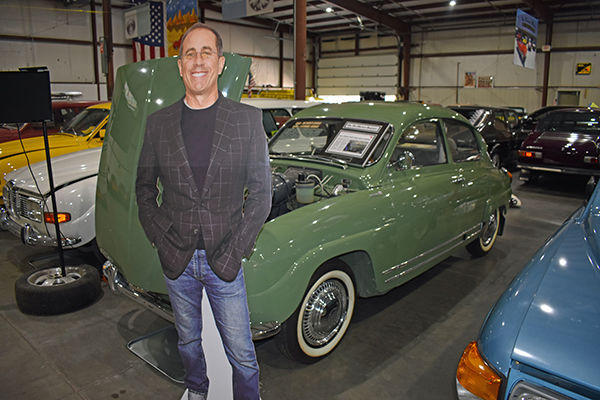 A cardboard cutout of Jerry Seinfeld stands near a 1965 Saab used in an episode of Seinfeld’s Netflix show “Comedians in Cars Getting Coffee.” Pioneer photo by Deb Holland

Tom and Patti Donney opened the Sturgis Car Museum last week in Sturgis. The museum is home to the Saab Heritage Museum USA and features more than 100 Saabs. Pioneer photo by Deb Holland

A cardboard cutout of Jerry Seinfeld stands near a 1965 Saab used in an episode of Seinfeld’s Netflix show “Comedians in Cars Getting Coffee.” Pioneer photo by Deb Holland

STURGIS — If it’s true that every car has a story, then Tom and Patti Donney have amassed a library of stories at the Sturgis Car Museum.

The museum, which is home to the SAAB Heritage Museum USA, features more than 100 of the Swedish-built cars on display, including race cars and 13 cars originally a part of the General Motors Heritage Collection.

The car that started it all, which is the heart of the Donneys’ collection, was purchased by Tom Donney’s dad, E.P., for Tom’s older brother, Tim.

“My dad wanted him to drive a safe, practical, and economical car.  The well-built Swede fit that bill,” Tom Donney said.

Tim used the car until the engine failed and he left for the Merchant Marine Academy in 1970. Tom was able to fix the engine and used it through high school before passing it on to the next brother in line, Thad.

When E.P. Donney bought the car all four fenders were painted a different shade of red and many of the engine components had been chromed. E.P. speculated that the car was used in rallies since that was its pedigree.

The Donneys actually have about 175 SAAB cars total. They had been in storage at various locations in Fort Dodge, Iowa, the home of Tom Donney Motors, until the Donneys brought them to Sturgis.

“It’s nice to have them in one building. Back in Iowa, we had them in four. They were all covered up because we had to protect them from the mold and the mice,” Patti Donney said. “For me it was really exciting to uncover them and actually look at them.”

That’s another great story tucked away in the museum.

For a 2014 episode, Seinfeld’s show featured comedian Fred Arminson from the show “Portlandia.” Just five days before the filming of the show, the owner of a Sonett V4, which was to have been used in the episode, decided he didn’t want the car used.

Tom’s son, Nate, back from deployment, grabbed the green Saab in Fort Dodge and met Tom in the Black Hills before heading to Portland, Oregon, with the vehicle.

Because the vehicle was so fickle, Tom got to drive the car in the episode during “B Roll” shots.

“We got to spend the day with Seinfeld. He’s not like Leno who is very personable and very friendly. Seinfeld is a little bit more reserved,” Tom Donney said.

Donney said all the cars in their collection are fun and unique.

Saab began life in 1937 in Trollhättan, Sweden, as an airplane manufacturer to provide planes for the Swedish Air Force, just as Europe was steeling itself for another war. Tom Donney said the car’s design features aerodynamics which translate well to racing, specifically at the Bonneville Salt Flats near Wendover, Utah.

The museum features the 1966 – 96 Monte Carlo built and raced by Bertil Sollenskog, a Swede who immigrated to the United States in 1970. The car set two world speed records in 2014. Tom Donney said Sollenskog was the man responsible for getting him into Salt racing.

The Donneys used the name Sturgis Car Museum instead of Saab museum in an effort to open their doors to other makes and models of cars and even motorcycles in the future.

“We hope to host for a month a bunch of Chevys and the next month Dodges or Fords. We could maybe create an area where we could bring in 10-15 cars from collectors in the Hills and put on display,” Tom Donney said.

The museum, an expansive 38,000 square feet, is located at the mouth of Vanocker Canyon in the former Dickson sawmill which most recently was owned by Black Hills Harley-Davidson.

“I never planned on having a Saab Museum, but sometimes circumstances force you to make decisions,” Tom Donney said.

In 2012, Donney, along with friend Bill Jacobson, successfully bid on Saab cars from the General Motors Heritage Collection that had been sold to Saab Spyker during the 2009 General Motors bankruptcy.

At that point, Tom said he and Patti had some soul-searching to do.

So in 2015 they established the Saab Heritage Museum USA as a nonprofit foundation.

“We knew forming a museum would be a greater challenge than we as individuals could handle. We also knew that without the help of the Saab community at large (and other auto enthusiasts who would want to help preserve the marquee) it would be a daunting task,” Tom Donney said.

They looked at many possible locations for the museum, including Phoenix, Minneapolis, and Des Moines, but settled on Sturgis.

“Sturgis offers a low-humidity environment which will help preserve the cars at 3,500 feet elevation,” he said. “It’s much drier here than it is East River.”

Donney realized this while volunteering as a football coach at Black Hills State University a few years back. He lived at a rented cabin near Belle Fourche and would leave cars there over the winter.

“I’d come back in the spring and it still would be the same. If I did that in Iowa, even in a building, it’s not the same. You’ve got mold. You’ve got brake problems,” he said.

Volunteering for football had a two-fold purpose. Tom Donney loves football and said that if he didn’t own a transmission business in Fort Dodge, Iowa, he would have been a football coach. Volunteering filled that void in his life.

It also gave him the opportunity to live in an area he and Patti were considering as a retirement location. Another lure for the Donneys was that South Dakota has no state income tax.

And, the Black Hills in general has a steady stream of tourists, not to mention the nearly half a million bikers who come to the Hills during the annual Sturgis Motorcycle Rally.

“Sturgis brings in a lot of tourists. It needed to be put somewhere where tourists will be coming in to keep the museum going,” Patti Donney said.

The Donneys also appreciate that the Black Hills is home to many car groups including the Corvette Club, the Mini Cooper Club, the Mustang Club, Camaro Club and now, the Saab Club.

The big question remains. Will there be a Saab Rally in Sturgis?

“We hope so. We’re campaigning for it,” Tom Donney said.