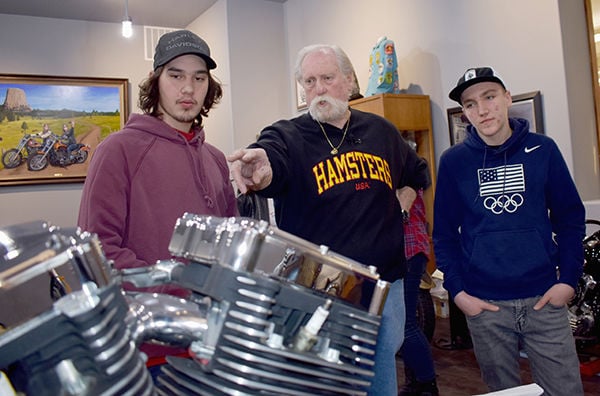 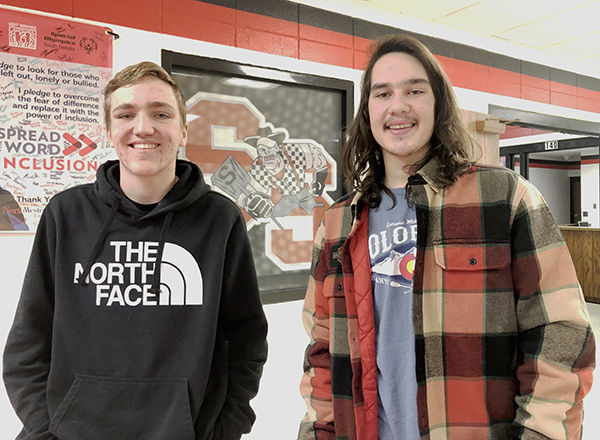 Race Garvin, left, and Dean Relf, were two of the four students who helped build a custom springer softail through the Lonnie’s Heart Youth Build. The motorcycle will be auctioned at Mecum Auction Friday at the South Pointe Casino in Las Vegas. Pioneer photo by Deb Holland

Race Garvin, left, and Dean Relf, were two of the four students who helped build a custom springer softail through the Lonnie’s Heart Youth Build. The motorcycle will be auctioned at Mecum Auction Friday at the South Pointe Casino in Las Vegas. Pioneer photo by Deb Holland

For five months, from January through May of 2019, a team of students, led by seasoned motorcycle industry experts built a custom springer softail through the Lonnie’s Heart Youth Build.

The program is named for Lonnie Isam Jr., motorcycle enthusiast and founder of the annual Motorcycle Cannonball Run.

The plan from the start of the youth build was to offer the bike for sale at Mecum Auction. That will come to fruition when the custom bike rolls on stage about 3 p.m. Friday at the South Pointe Casino in Las Vegas.

Proceeds from the no-reserve sale will be used to help fund a similar youth build project this year, said Emma Garvin, executive director of the Sturgis Motorcycle Museum.

“It’s been fun having the bike at the museum, but it will be good to see it go to a new home,” said Garvin, who will be on hand at the auction in Las Vegas Friday.

Race Garvin, Emma Garvin’s son, was just a freshman when chosen for the bike build in 2019. He spent every Saturday from January through May helping build the bike from the steel frame on up.

“I really enjoy working on motorcycles, and this experience was awesome,” Garvin said.

He comes from a motorcycle-centric family, his dad is a manager at J&P Cycles, and his mom is executive director at the Sturgis Motorcycle Museum.

“Even before this, I have been following in my dad’s footsteps doing small things here and there,” he said.

“This really helped me on the newer side of things figuring out how to fabricate and cut metal,” he said of the student bike build.

It also meant dealing with challenges as they came.

When the motor arrived, it did not fit into the frame the team members already had started.

“We had to heat up the metal around the motor and hammer it so the engine would fit,” he said.

They also used a front fender on the back of the bike which meant that team members had to figure out new mount brackets.

“It was a real team effort to get this bike built,” Garvin said. “I think it should do really well at the auction. We put a lot of effort into it and it’s really well built.”

“This isn’t something that happens every day. Not a lot of people just put you in a shop and give you the opportunity to work on a bike that is so unique,” he said.

Relf said he has worked on both cars and motorcycles since a young age.

“I have more experience with cars, but motorcycles have been a passion as well,” he said.

Garvin said his vision of the finished bike was close to what the final product looks like.

And although he spent countless hours building the bike, Garvin said he doesn’t have an overwhelming emotional attachment to it.

If given the chance, what would Garvin tell a potential buyer.

“We used quality parts, they’re not cheap,” he said.

And Relf’s message to a buyer.