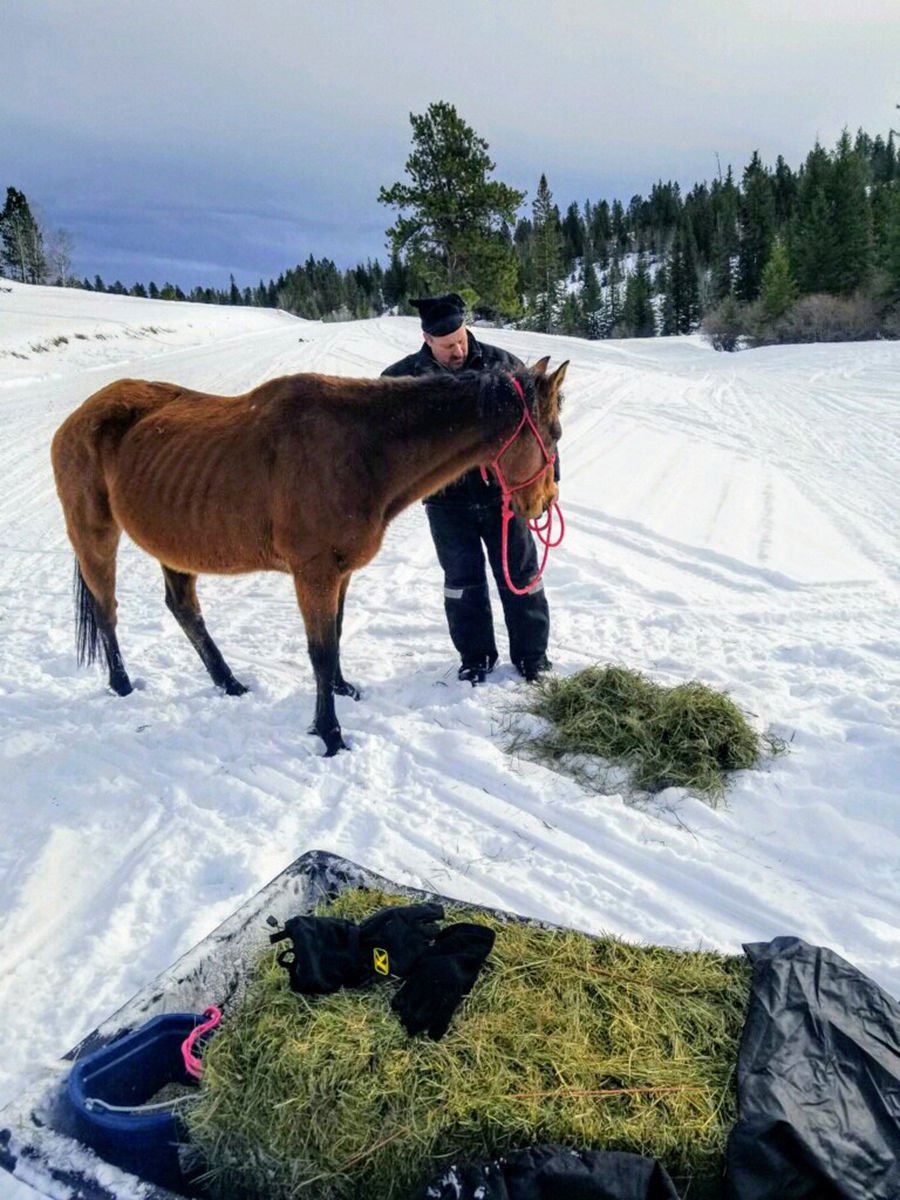 Pictured is the horse that was spotted near buckhorn trail in Wyo., getting some feed. Courtesy photo 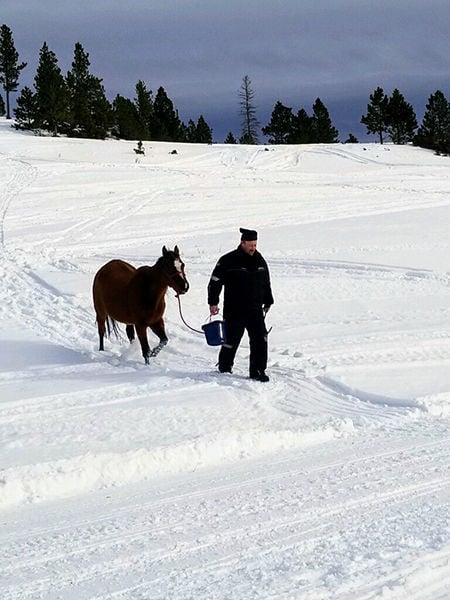 Shannon Percy walks the horse back down from the trail. Courtesy photo

Pictured is the horse that was spotted near buckhorn trail in Wyo., getting some feed. Courtesy photo

Shannon Percy walks the horse back down from the trail. Courtesy photo

NORTHERN HILLS — A horse that has been reported roaming loose in the Black Hills near the Wyoming border as early as September was found and captured Jan. 17.

Hunters and grooming operators on the snowmobile trails have put in calls to Game, Fish, & Parks to notify the spotting of the horse.

Shannon Percy, the district park supervisor for GF&P, was preparing the trail for a veteran’s snowmobile ride Jan. 16, when a snowmobiler at the trail head reported that they saw a horse up near the trail.

“He just had mentioned he saw a horse,” Percy said. “I know our grooming operators had seen it a week prior to that, but we were unable to track it down … but then Friday, went up, and we were able to locate it, got her out of there.”

On Trail 3 up behind Buckhorn in Wyoming, the horse was trailed back down the trail to the highway.

Veterinarian Sandra Holcomb, owner of Metzger Holcomb Animal Clinic in Spearfish, said the mare was thin. Its body condition was 4 out of 10, 10 being the best, based off a photo she viewed of the animal.

Wyoming brand inspector, Barney Hiser, met Percy there and was unable to identify a brand on the horse.

“We couldn’t find a brand on her, we weren’t even sure whose horse it was,” Percy said.

“It was somebody’s horse, I don’t know who, but nobody’s reported one missing and everything that I got reported missing doesn’t describe this horse, so I have no clue where she came from or how long she’s been up there,” Hiser said.

Hiser said he received calls about the horse in September as well. He took the horse to his home for now.

The horse’s ribs and hip bones were visible, and although the horse’s stomach protruded from feed, Holcomb said it was likely the horse not eating quality feed and may even have parasites.

“I’m trying to find the owner but if I don’t find it pretty soon, it’s going to be sold,” Hiser said.

Hiser also said the horse is still in need of lots of feed and water.

Percy said the horse obviously belongs to someone.

“It’s somebody’s horse. It just either escaped, or something happened. There was reports that (Hiser) from Wyoming that he’d had hunters calling and tell him that they had seen this horse there so, it’s been out there since September, until we finally caught her last Friday.”

“She’s gentle,” Hiser said. “She was a saddle horse at some time.”

Hiser estimated that the horse is probably 10-12 years old.

“She was in so-so health. We got her some grain and some hay and stuff,” Percy said. “She was surviving, but you can see bone and ribs. She was hungry.”

“She’s damn sure better off now than what she was … looks five times better now than she did last week,” Hiser said. “She’s fine right now. Like I said, I’ve been in the process of just trying to figure out what to do with her from here.”