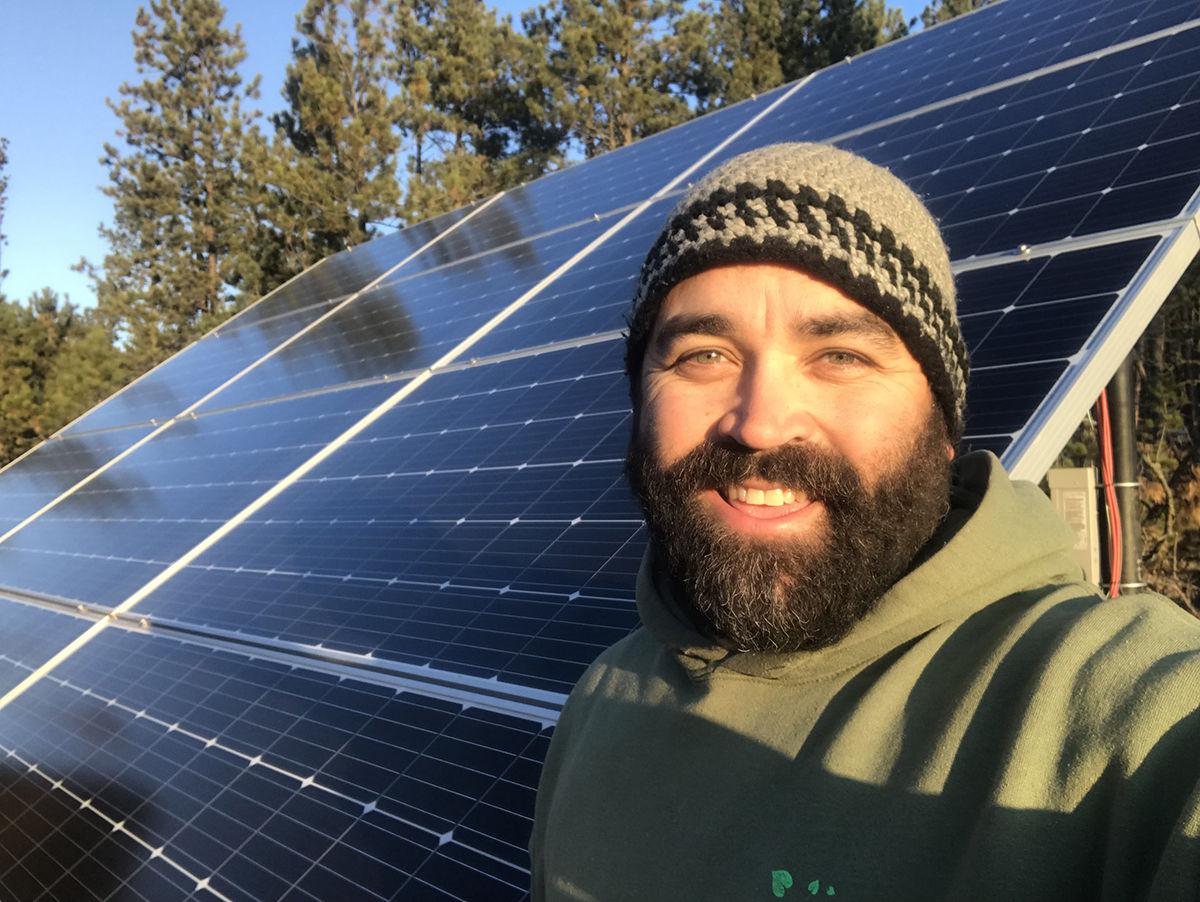 Jared “Cappie” Capp, of Spearfish, and the custom-built A-Frame home will be featured Sunday night on Discovery Channel’s Off the Grid. It is the second time he would be featured. Courtesy photo 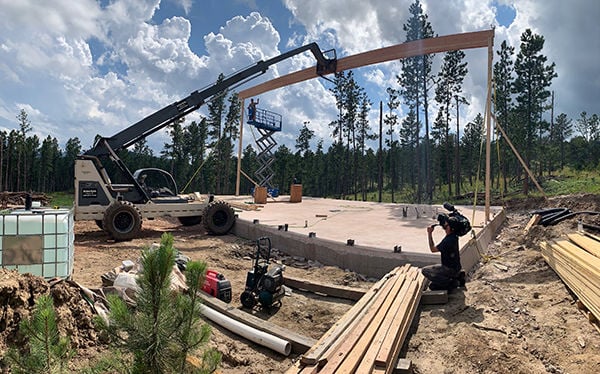 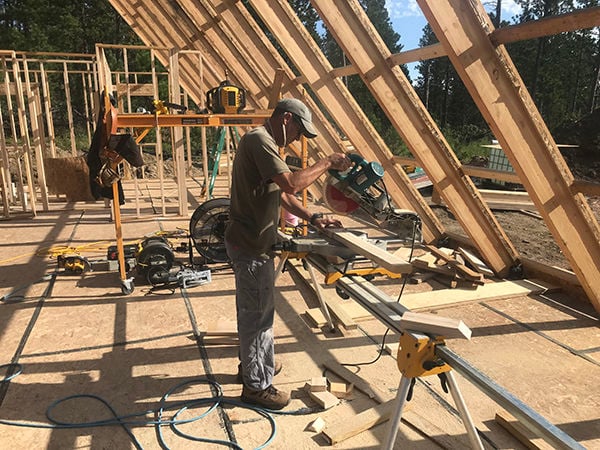 Paul Lester is one of Jared Capp’s two employees who helped build the home featured in the show. Courtesy photo

Jared “Cappie” Capp, of Spearfish, and the custom-built A-Frame home will be featured Sunday night on Discovery Channel’s Off the Grid. It is the second time he would be featured. Courtesy photo

Paul Lester is one of Jared Capp’s two employees who helped build the home featured in the show. Courtesy photo

SPEARFISH — Jared “Cappie” Capp is back building a custom home on Discovery Channel’s Building Off the Grid.

Built essentially as a weekend home for a Rapid City couple with two young girls, the house is completely off the grid. It draws its water from a well on the property, has a septic system, and is powered by a solar panel system.

Capp, from Spearfish, and his Pangea Designs crew were stymied by this summer’s soggy and cool conditions.

“We usually try to pour concrete in May, but because it was so wet this year we didn’t pour concrete till the end of July,” he said. “We built that house in 100 working days.”

Facing a production deadline, the three workers lived on the site in trailers, forgoing a two-hour drive one way from Spearfish.

“We were able to do it fast because we had no choice. … It got all South Dakota on us real quick up there,” Capp said. “When we started filming the shoot, one of the producers was like, ‘we’d love to shoot the reveal in the snow.’ I’m like, ‘careful of what you wish for.’ The morning we shot the reveal it was 2 below.”

The build site was on a dirt two-track, two miles from the nearest county road.

“You couldn’t get anything bigger than a 20-foot trailer back there because the road was so windy,” he said.

And because of the constant wet conditions, getting stuck was a common occurrence.

“My God. Everything got stuck. A dump truck got stuck,” he said. “They brought in another dump truck to pull it out. It got stuck too. So they brought in a bulldozer to pull both those things out and had to bring in $10,000 in gravel, which wasn’t in the budget.”

But perhaps the most challenging day was moving the ridge beam into the building site.

The beam, which sits at the apex of the roof, was five inches wide and 24 inches tall. But it was 60 feet long.

So Capp made a dolly for the tail end and mounted a hitch on the front. For the next five and a half hours, the crew made the two-mile trip up the windy road.

“We’d drive till we hit a corner that we couldn’t make,” he said.

Then with a piece of equipment, they would pick the rear end of the beam up and shift it so the truck could pull the beam to the next un-navigable corner, and the process would start again.

The first home Capp built that the Discovery Channel filmed was near the top of Maitland Road. It was built from storage containers.

However, the Hill City home was a custom stick-built home.

Spending four or five days a week never leaving the worksite, working 14-hour days the crew finished the home turning the keys over to the owner on Oct. 30.

The home is built on an old mining claim and is surrounded by Forest Service land. The property even has an old tin mine on it blasted deep back into the hill.

Capp said the full production team was on the site for 10 filming days. Capp shot about 50 hours of video with a GoPro and time lapse.

“One thing that doesn’t get the credit is the actual crew,” he said. “When you see a picture of a guy in the snow and he’s slugging through the mud; well, the cameraman is standing in the mud too. He can’t feel his fingers either.”

Capp gave a prime example of how the film crew suffered the weather.

“The sound guy was from Texas. It looked like he went to Cabela’s and bought one of everything,” Capp said. “He was so shiny. He said, ‘how how do you people live in this?’  I said, ‘because people from Texas stay away.’”

Capp said the home uses a wood stove for heating and a geo air system that uses 3,000 linear feet of 4-inch drain tile buried seven feet deep to help cool and heat the home. A fan pushes air through the long tube which circulates air constantly around 56 or 57 degrees.

It has a septic system and a well drilled about 100 feet deep. For power it uses solar panels and a new single lithium battery which weighs about 350 pounds and is the size of a mini refrigerator.

Hill City is well know for receiving large hail, and Capp said the solar panels withstand hail as well as a car’s windshield.

“A nice thing about a solar system is that the panels themselves are a pretty small percentage of the cost,” he said.

The panels cost a couple hundred dollars apiece. The entire system cost about $28,000.

While living off the grid may have more upfront costs, he said in the long run prices of living on the grid are similar.

So what does he enjoy most about building off the grid?

“For me a lot of it is taking a bare piece of land which, by a lot of people’s standards, is unbuildable, and to not only create a home there, but to make something beautiful,” he said. “This house has every convenience you could want in it: a washer and dryer, a dishwasher, hot running water.”

Living off the grid is, “pigeonholed into people thinking you are sitting at a wooden table with a bare lightbulb over you and eat porridge with a hand-carved wooden spoon. And that is not it at all.”

Off-grid homes can have every amenity as on the grid houses, but living responsibly is key.

“We can hear all our fathers in the back of our head, ‘Turn the damn light off,’” Capp said. “So turn the lights off.

He said he constantly talks about “practicable sustainability.”

“People do want to do good things for the planet,” Capp said. “They do want to be good stewards of resources, but they are also not going to live in a cave. Using copious amounts of electricity is not a luxury a lot of the world are afforded.”

Capp said he is excited to see Sunday’s episode on the Discovery Channel.