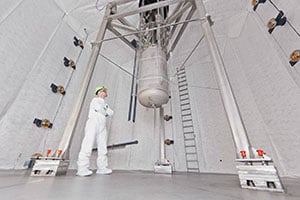 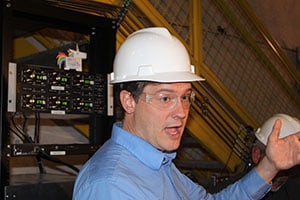 Dan McKinsey, a LUX co-senior spokesman, discusses the recent findings of the LUX dark matter experiment. Physicists around the world are devoted to their search for both dark matter and dark energy, which makes up nearly all of the universe. Pioneer photo by Mark Watson

Dan McKinsey, a LUX co-senior spokesman, discusses the recent findings of the LUX dark matter experiment. Physicists around the world are devoted to their search for both dark matter and dark energy, which makes up nearly all of the universe. Pioneer photo by Mark Watson

LEAD — For as long as human beings have existed darkness has been the embodiment of our most fundamental fear, the fear of the unknown. And the principle pursuit of the curious and brave has always been to shed light on that darkness, to make the unknown known.

We still have a lot of darkness left to illuminate. As far as the cosmos is concerned, we’ve only shed proverbial light on roughly 5 percent of the universe; the remaining 95 percent is dark: 27 percent dark matter, 68 percent dark energy.

If you’re an astrophysicist, or you’re lucky enough to live in the Black Hills of South Dakota, you probably know a good bit more about dark matter than the average person thanks to the Sanford Underground Research Facility’s Large Underground Xenon experiment (LUX), the most advanced dark matter detection experiment in the world. But what of this dark energy, which makes up even more of the universe?

To put it simply, dark matter is the as-of-yet undetectable stuff that holds things together in the universe along with gravity, which physics shows us cannot do this alone. Dark energy is the as-of-yet undetectable force that’s pulling things apart, causing the accelerating expansion of the universe. But as one might imagine, it’s really not that simple.

In the mid-1990s two teams of scientists were studying distant supernovae — exploding stars to the layman — hoping to learn more about the expansion of the universe. What these teams discovered was startling. Not only was the universe expanding, but the rate of its expansion was accelerating. Exactly what was behind this accelerating expansion, this mysterious force pulling the universe further and further outward, faster and faster, was, and still is, undetectable. It was non-luminous. It was dark. This is dark energy. And its discovery landed three of those scientists the Noble Prize for physics in 2002.

“Everybody expected, I think, that you would find that the universe was finite and that gravity would pull it all back together,” said Sanford’s lead scientific investigator Dr. Kevin Lesko, a physicist with the Lawrence Berkeley National Laboratory in Berkeley, Calif. “What they observed was, no, as you go out it’s getting pushed apart. It’s like there’s a force out there that’s expanding things, making it accelerate. That’s the dark energy, that’s the force that’s pushing things apart as a function of distance. What is it? That’s a good question.”

Just as there are several dark matter detection experiments across the globe trying to pin down this elusive and integral piece of the universe, there are also several experiments hoping to get a grip on dark energy. Three to be exact, two in Chile and one in Hawaii.

The most advanced of the three is Chile’s Dark Energy Camera, which snaps 400 570-megapixel photographs of the sky each night from its 7,200-foot perch in the desolate Atacama Desert. It will take these photos for 525 nights over a period of five years. This photographic survey will capture detailed images of one eighth of the night sky, focusing on roughly 100,000 galaxy clusters, allowing scientists to examine the way these clusters change in size and shape over time. The idea is to compare the compressive force of gravity on these galactic formations to the expansive force of dark energy, thereby attaining the first real measurements of the dark force since its discovery — hopefully.

Hawaii’s dark energy experiment, the Subaru Measurement of Images and Redshifts (SuMIRe), operates under the same general plan as Chile’s Dark Energy Camera. SuMIRe, however, will examine one tenth of the night sky. What it loses in sky covered it gains in depth. It can see 13 billion light-years into the universe, some 3 billion light-years farther than the Dark Energy Camera.

Chile’s second dark energy experiment, the Atacama Cosmology Telescope Polarization sensitive receiver (ACTPol), takes a different approach to the hunt, studying the polarization of microwaves from the cosmic microwave background (CMB), which is the earliest radiation detectable — appearing shortly after the big bang — that fills the universe. The polarization of the CMB is distorted by its passage through galaxies from their creation to the arrival of their light on earth. ACTPol scientists will study these distortions in detail, hoping to find some measurable effects of the dark force in comparison to the effects of gravity and dark matter.

Understanding the dark sector of the universe is a top priority for the international scientific community, a group that’s never been keen to stay in the dark for long. So little is known about dark matter and dark energy, however, that no one on the planet is in the position to estimate when we might shed light on this 95 percent of our universe currently shrouded in darkness. When one considers how long it took to get a hold on that other 5 percent, one begins to understand just how boldly ambitious these experiments are. But this should be no deterrent, no cause for despair. One must also take into consideration how much of that 5 percent scientists nailed down in the last 100 years. Our determination is great, and our knowledge and technology continue to expand exponentially over time, just like the vast and beautiful universe we call home.