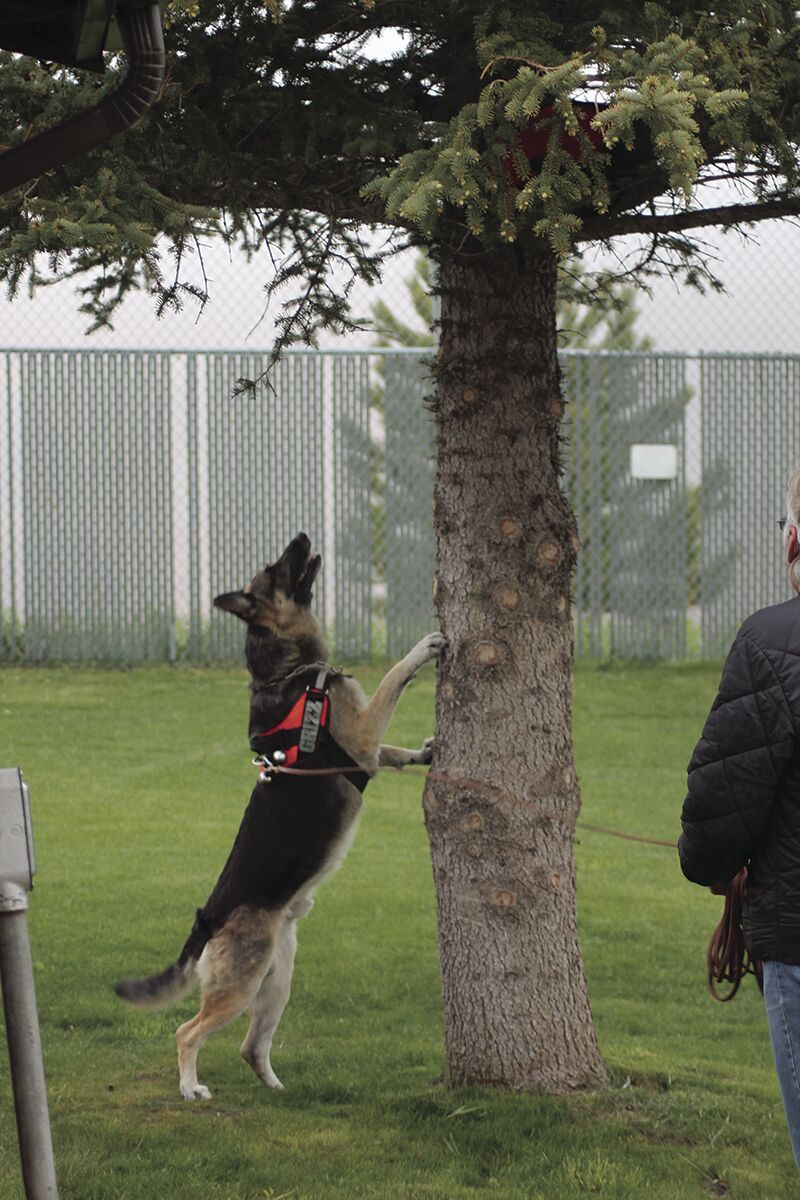 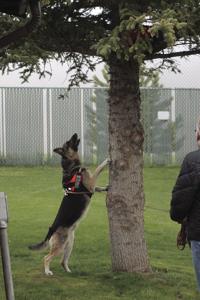 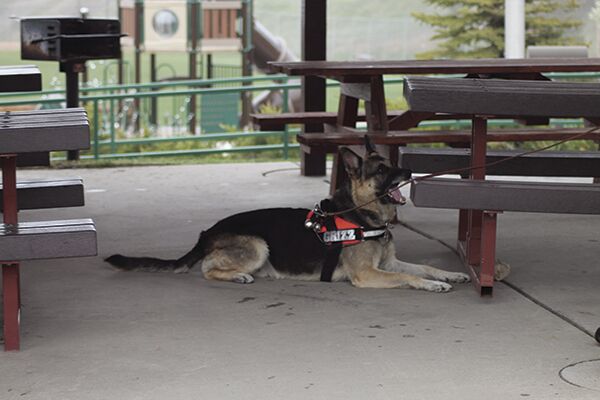 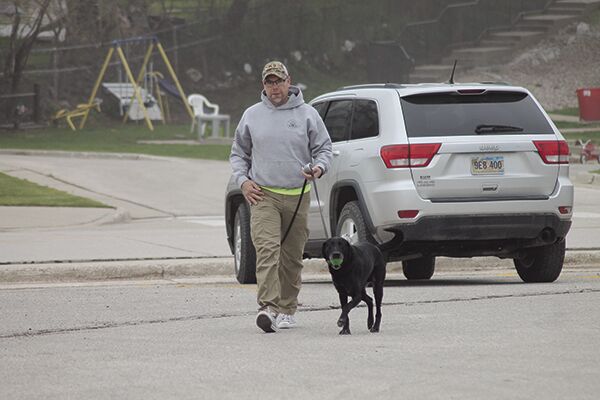 LEAD — Since 2009, the Wolf Pack Working Dogs have been called upon to help search and rescue efforts throughout the Black Hills, and during Thursday’s Science Rocks presentation, some of the courageous canines and the heroic humans who train them took some time to explain the science behind the super sniffers.

Sharon Kirkpatrick-Sanchez, a retired psychology professor, began the presentation by diving into the classical and operant conditioning that is the foundation of dog training.

“You may or may not have heard of Ivan Pavlov and his drooling dog,” Kirkpatrick-Sanchez began. “Classical conditioning is all about making signals, (and) learning what kinds of stimuli in your environment you need to pay attention to, because they’re important.”

In Pavlov’s 1890s era experiment, the Russian scientist discovered that by setting a ticking metronome in front of a dog before feeding it, he conditioned the animal to start salivating at the sound of the metronome. This classical conditioning technique is used by dog trainers to communicate to the animal what behavior the trainer wants to isolate for conditioning.

“In classical conditioning, we have learned how and what we need to pay attention to in our environment,” Kirkpatrick-Sanchez explained. “We use it deliberately to set up situations to deliberately teach cues to our dogs.”

Instead of a metronome, Kirkpatrick-Sanchez said they use a hand-held clicker to provide the dogs with an audible acknowledgement that the behavior they just performed was special, then a reward is introduced to show that it should be paid attention to.

“You start pairing a sound, a sight, a something with something that the animal wants,” she said.

Operant conditioning is used to encourage or discourage an isolated behavior by increasing the reward. Kirkpatrick-Sanchez said this is where the notion of positive versus negative reinforcement comes into play.

“Operant conditioning is all about consequences,” she said.

“Some of your behaviors work to stop bad things in your environment,” Kirkpatrick-Sanchez said. “That’s negatively reinforced behavior.”

Once the dog has been conditioned to learn a specific behavior, the team can start training it to zero in on the desired search and rescue techniques – primarily locating specific scents.

There are different techniques for different types of search and rescue missions the dogs could be used on. Area search dogs cover large swaths of an area to locate any human scent, then return to their handler and lead them back to it. Trailing dogs are trained to follow a specific scent through all sorts of terrain. Human remains detection requires the dog to be able to pick up on the unique scents emitted from decomposing human flesh.

“You use human remains,” she said. “There is no other thing that you can use to duplicate (those scents).”

In her presentation, Dolan said almost anything that produces a DNA sample could be used for training. Unprocessed hair from a brush, fingernail clippings, teeth, surgical leftovers, clothing worn by a deceased individual, especially if the person was not discovered immediately, and dirt from a natural grave contains all compounds trainers can use to teach dogs to detect human remains.

Dolan said there are some companies working to create pseudo-scents for human remains detection training, but evidence compiled by dogs trained using fabricated scents won’t hold up in a court of law.

“If there’s a crime scene and I see my dog indicated, a lawyer’s going to rip that apart if I’ve used pseudo-scent,” she said.

No matter what type of search and rescue the dog is specifically trained for, the efficacy of using dogs to find missing individuals comes down to the dog’s unique olfactory system.

Shannon Croft, a trained vet tech explained that both dogs and humans have olfactory bulbs located near the front base of their brains, which process odors. However, a dog’s olfactory bulb is around 40 times larger than a human’s and contains 300 million receptors, versus just 6 million in humans.

“When we walk into grandma’s house and we smell grandma’s stew, we go, ‘Mmm, that’s my favorite stew that grandmas makes,’” Croft said. “Your dog walks in and goes, ‘Mmm, beef, barley, carrots, basil,’ I mean they just name all the ingredients because that’s how they smell the world.”

The physiology of the dog’s nose is also designed for maximum sniffage. Looking at a dog’s nose, there are two nostrils at front and slits on either side. As the dog breaths in through the front nostrils, air is expelled through the slits.

“They can constantly sniff in,” Croft said. “So they’re constantly giving those olfactory receptors new air to analyze.”

“If you’ve ever heard someone say a dog can smell when a human is afraid of them, they do that with their left nostril, that’s where they pick up the human fear-induced sweat,” Croft explained.

Croft also said that dogs possess a vomeronasal organ in the roofs of their mouths, used to pick up pheromones and scents from other dogs, which some scientists believe can also be used to detect scents in water through taste.

“So, without having to inhale, they can actually use it to (pick) up scent under water,” she said.

Croft said forensic science has only recently started to scratch the surface of detecting scents and smells to locate missing persons.

“It’s really only been in the last 15 years that the science has caught up with the dogs that they have the equipment, or even the ability, to collect the odors and the scents that come off of a cadaver,” she said.

So, it turns out that not only are dogs “man’s best friend,” but they’re also one of nature’s best tool for search and rescue.