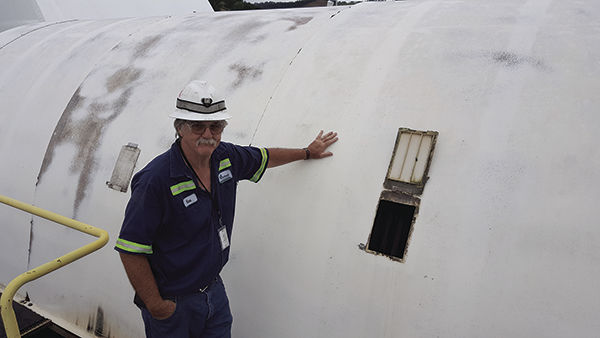 Ken Noren, foreman at the wastewater treatment plant at Sanford Lab, stands next to one of the filtration systems, which uses bacteria to remove ammonia and other pollutants from water siphoned from underground. Pioneer photo by Alex Portal 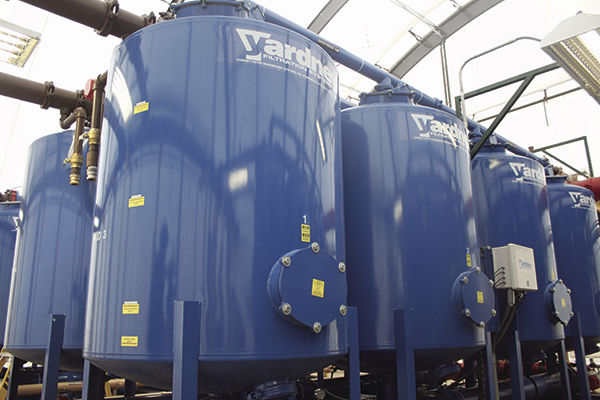 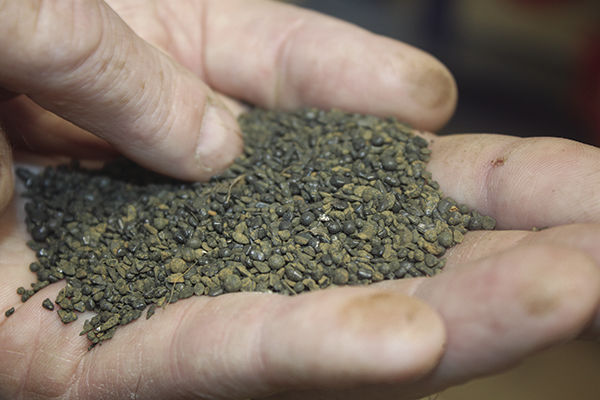 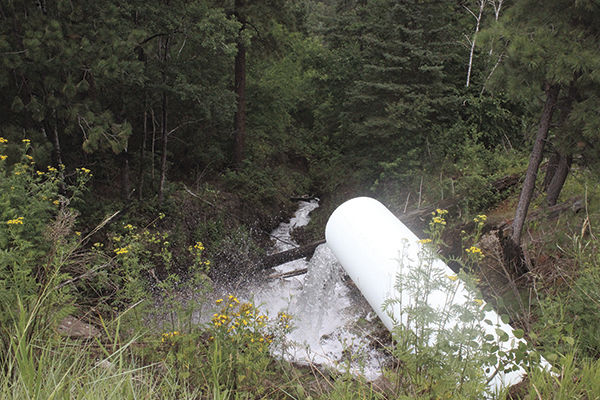 Ken Noren, foreman at the wastewater treatment plant at Sanford Lab, stands next to one of the filtration systems, which uses bacteria to remove ammonia and other pollutants from water siphoned from underground. Pioneer photo by Alex Portal

LEAD — Ever since it reopened the wastewater treatment plant located on the Yates Shaft campus in 2008, the Sanford Underground Research Facility has been making improvements and modifications to its treatment process.

“The main change that we’ve made to the plant is putting in capabilities to deal with the iron that we get in the water from the underground,” said Mike Headley, laboratory director at the Sanford Lab.

Headley explained that after mining activities ceased in 2002, the shafts and drifts were allowed to fill with water that seeped in through the ground. That water accumulated and drew out the iron oxide from the rock walls of the mine.

“I don’t actually believe that it’s a permit requirement for us to remove that (iron),” Headley said. “But we’re not really anxious (to) send water over the hill that’s orange.”

Instrumental in upgrading the facility is Ken Noren, foreman at the wastewater treatment plant. Noren said he’s been able to reduce the amount of chemicals used in the treatment process from almost 1,000 gallons every two weeks, down to around 200 gallons per year, a feat Noren attributes to simply being vigilant.

“Watching it, changing it, and not listening to the sales rep,” he said. “(They say), ‘You need three gallons of this, and also you need to use cold water.’ Nah, use hot water.”

Noren explained that when water is heated, the molecule expands, which allows the chemical to enter it and do its job more efficiently, thereby lessening the amount of chemical product, which needs to be mixed with the water.

Other innovations implemented by Noren and his team have cut the power usage of the plant by nearly 1,000 kilowatts.

“This plant, in the future, will be gravity-run,” Noren said. “We’ll only run power to do backwashes, and that’ll only be about an hour a day.”

Although some chemical use is still necessary to treat the water as it passes through the plant, the filtration process is all natural.

The process starts in a 2-million-gallon holding tank where water pumped from as low as the 5,667-foot level underground is mixed with water piped in from the Grizzly Gulch Tailings. Noren explained this serves a dual purpose as the cool rainwater from the tailings has to be treated before it can be released back into the environment, and the warm water brought up from underground at the lab must be cooled to less than 75 degrees before it can be dumped into Whitewood Creek. From there, the water is gravity-fed to the first of three filtration stations on its journey to becoming clean and fresh.

The first filtration system the water goes through is comprised of minerals housed in tanks, where the water is forced through layers of anthracite coal, fine garnet, coarse garnet, and finally a layer clean gravel.

“I classify the coal as the main unit that does most of the work,” Noren said.

Once a day, water is sent back through the tanks in the reverse direction to cleanse the filter of all the iron and dirt content drawn out from the water; this process in called “backwashing.” Noren said anywhere between 50 to 60 pounds of iron is collected from that singular filtration process every day. Once enough debris has accumulated, it is then trucked to a landfill. The backwashed water is collected and reintroduced later in the process.

Another element that must be removed from the water is ammonia, and that’s where Noren enlists the help of some friends.

The water flows through a series of bacteria-covered disks, which remove all traces of ammonia from the water.

“Instead of cheeseburgers, (the bacteria) eat ammonia,” Noren explained. “Why they picked that, eh, not my problem, they like it.”

As the bacteria eat the ammonia, they release nitrates back into the water.

“But we’ve learned here that if you starve the bacteria enough, they will eat their nitrates, too,” he said. “We show no ammonia, and very little nitrates.”

Finally, the water is sent through one last filter using the same method as the first leg of its journey, in order to remove any remaining unwanted elements, including any bacteria that may have broken free from the disks. Noren said the whole process from start to finish takes around 36 hours and pumps 1,850 gallons of fresh, clean water out into Whitewood Creek every minute.

“The water going down the creek is somebody else’s drinking water,” he said. “So if I can be responsible up here, they can have better quality down there.”

The treatment process is tough on the harmful materials that taint the water coming from the old mines; however, it’s done in such an environmental and eco-friendly way that many unsuspecting travelers can find themselves being hurtled through the drainage spout which cascades down the hillside from the lab, affectionately called the “Pluma Plunge,” and empties out into Whitewood Creek along Highway 85.

“Believe it or not, we have shrimp, crayfish, and leeches in this water. … They’ll make it all the way through the system,” Noren said.

“It shows me I’m doing my job right. If (that) stuff can survive (the treatment process), other things in the creeks can survive, too,” he said.